Iceland was settled in the late 9th century A.D. by Nordic people. These early settlers brought sheep, horses, and the ancestors of the Icelandic Sheepdog, Iceland’s only native breed. Over the centuries, these dogs adapted to the harsh terrain and the needs of Icelandic farmers and shepherds. By the early 20th century, however, farming in Iceland declined and the number of Icelandic Sheepdogs was so drastically reduced that the breed was in danger of extinction. In recent years, efforts by Icelandic and international breeders have increased the numbers, particularly in Iceland, where this working breed has become newly popular as a family companion.

The Icelandic Sheepdog is a slightly under medium-sized Spitz type dog, with a triangle-shaped head, prick ears, and a thick double coat. Seen from the side, the dog is rectangular. The length of body from point of shoulder to point of buttocks is greater than the height measured at the withers. The depth of chest is equal to the length of the foreleg. The tail is carried in a loose curl over the back. There are two types of coat, long and short, and both are thick and extremely weatherproof. There is a marked difference in appearances between the sexes. The Icelandic Sheepdog should be evaluated as a herding and drover dog, and exaggerations or faults should be penalized in proportion to how much they interfere with the dog’s ability to work.

Icelandic Sheepdogs are hardy, agile, alert and intelligent. Expression is gentle, intelligent and happy. A confident and lively bearing is typical.

They drive livestock by barking, and use that talent to advantage as watchdogs. Having evolved in a country without natural predators, however, Icelandic Sheepdogs are not aggressive and have very limited hunting instincts. This breed is very adaptable, equally at home as a family pet or outdoors with livestock. They thrive on human companionship.

The strongly-built head is free of wrinkles, and proportional to the size of the body. Viewed from the front or from the side, the head is triangular in shape. The muzzle is slightly shorter than the skull and they are joined by a clearly defined, but not abrupt, stop.

The skull is broad and slightly domed. The skull tapers slightly from the widest point to the base of the muzzle. The cheeks are flat.

Viewed from above and from the side, the muzzle tapers evenly toward the nose, forming a blunt triangle. The nasal bridge is straight. Lips are close-fitting; are black, but may be dark brown in chocolate or cream-colored dogs.

The Icelandic Sheepdog has a complete set of evenly spaced, white teeth meeting in a scissors bite.

The nose is black, or dark brown in chocolate and some cream-colored dogs.

The eyes are medium-sized and almond-shaped. Eye color is dark brown, except in chocolate and some cream-colored dogs where the eyes may be somewhat lighter. Eye rims are tight and fully pigmented, matching the color of the nose and lips.

The ears are strongly erect, of medium size, triangular in shape, with firm edges and slightly rounded tips.

The neck is moderately long, but strong and well muscled, blending into sloping shoulders. It is slightly arched, and carried high. The neck is free of throatiness and covered with a thick ruff of hair.

The forelegs are straight and muscular, with strong bone and moderately short, slightly sloping, flexible pasterns.

The Icelandic Sheepdog is just slightly longer than tall. The topline is level. The back is well muscled and joins with a broad, muscular loin. The croup is fairly short and wide, and slightly sloping. The ribs are moderately sprung out from the spine. The chest is broad and deep. The forechest should extend in a shallow oval shape in front of the forelegs, but the sternum should not be excessively pointed. There is a slight tuck-up.

The angulation of the hindquarter matches that of the shoulder assembly. The thighs are broad and muscular.

The rear legs have strong bone and are well angulated at stifle and hock joints. The hocks are well let down. Viewed from the rear, the rear pasterns should be parallel to each other; from the side, they should be perpendicular to the ground.

The feet are oval in shape, with well-arched, tight toes. Pads are well developed. Double dewclaws may be present on the front feet and are desirable on the rear.

The tail is set on high and carried in a curl, touching the back.

The Icelandic Sheepdog has a double coat. The outer coat is fairly coarse, straight, and may lie flat or stand somewhat away from the body. The undercoat is thick, soft, and dense. The hair on the face, topskull, ears, and front of the legs is shorter than the coat on the body, while the coat on the neck, chest, back of forelegs and thighs is somewhat longer. The tail is bushy.

The outer coat is medium length and fairly coarse, with a thick, soft undercoat. The hair is shorter on the face, top of head, ears and front of legs; longer on the neck, chest and back of thighs. The tail is bushy, and hair length is in proportion to the coat.

The outer coat is longer than in the short-haired type, is fairly coarse, with a thick, soft undercoat. The hair is shorter on the face, top of the head, ears and front of legs; longer behind the ears, on the neck, chest, behind the forelegs and back of thighs. The tail is very bushy, and the hair length is in proportion to the coat.

The following colors are permitted.

One of these colors should always predominate and must be accompanied by white, which must never be the predominant color. The most common white markings, which are often irregular, are a blaze or part of the face, collar, chest, socks of varying length, and the tip of the tail.

Lighter shading of the predominant color may occur on the underside of the dog from the throat to the tip of the tail.

Predominantly tan or gray dogs may have a black mask, some black tips on the hairs or even a few black hairs in their coats. Predominantly black dogs, along with the white markings mentioned above, may have traditional tan markings on the cheeks, over the eyes and on the legs. A pied pattern consisting of patches of the permitted colors on a white background is permitted, provided that white is not the predominant color.

Fault: A solid black mantle or saddle on any tan dog.

The desirable height for a mature Icelandic Sheepdog is 18 inches (46 cm) for a male, and 16½ inches (42 cm) for a female. Weight should be in proportion to the height.

Correct movement is essential in this breed. The Icelandic Sheepdog moves with strides of moderate length in a quick, agile trot, essential for driving stock in Iceland’s rough terrain. The forelegs and hind legs are carried straight forward, with neither elbows nor stifles turned in or out. While the dog is gaiting, the topline remains firm and appears level. 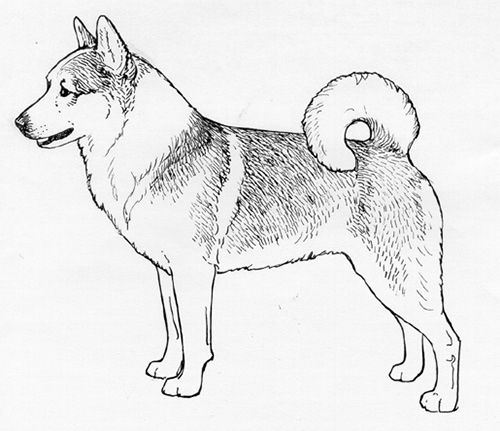 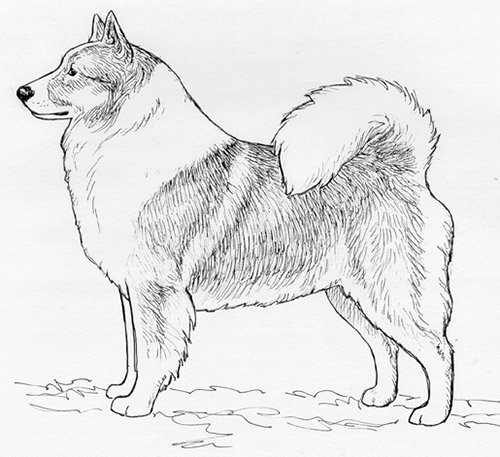