The lbizan Hound is considered to be one of the most ancient breeds of hounds and bears a striking resemblance to the Egyptian god, Anubis. Their name is taken from the island of Ibiza, which is off the coast of Spain. It is believed they were taken there by the Phoenicians around the eighth century. Another theory is that they were brought there by the invading Carthaginians in the sixth century. Regardless, the Ibizan Hound has been bred for thousands of years as a hunting dog, its primary quarry being rabbits. Although a Sighthound, they use sight, scent and sound while hunting. Function was, and still is, of prime importance.

The lbizan Hound was recognized by the United Kennel Club in 1979.

The Ibizan Hound is slightly longer than tall. They possess clean, fine bones and strong, flat muscling with no sign of heaviness. They present a unique appearance with their clean-cut lines, large prick ears and light-colored pigment. They are a breed that is free from exaggeration, with the exception of their characteristic large ears. The Ibizan possesses a deer-like elegance that is combined with the power of a hunter. They are as fast as the top coursing breeds, and without equal in agility and high jumping and broad jumping ability. The lbizan Hound is very flexible, being able to spring to great heights from a standstill and turn abruptly without losing speed.

The breed is characteristically even tempered, affectionate and loyal. Being extremely versatile and trainable, they make an excellent family pet as well as show dog and are well suited for tracking, obedience and lure coursing. Being a Sighthound, they exhibit a keen natural hunting instinct, coupled with much determination and stamina.

The long, narrow head is in the form of a cone truncated at its base. It is finely chiseled and dry fleshed, and rather small for the size of the body.

The long, flat skull has a prominent occiput. The forehead is fine and flat and the stop is only slightly defined. The skull and the muzzle are equal in length.

Long and fine, with a slightly arched nasal bridge. The nasal bridge and the nose protrude over the lower jaw. The lips are thin and close fitting and flesh colored.

The small, oblique eyes range in color from clear amber to caramel. Their appearance is intelligent, alert and inquisitive. The fully or partially pigmented eye rims are the same color as that of the nose.

The prominent nose extends beyond the lower jaw. The nostrils are open. Pigment is a rosy flesh color, tending to harmonize with coat color and may be solid or butterfly. It is never dark brown or liver in color.

The large, pointed, natural ears are highly mobile; they can point forward and sideways or be folded backward, according to the dog's mood. When the dog is alert, the ears never droop, bend or crease; the lowest point is at the level of the eye. When viewed from the front, ear height is approximately 2 times that of the widest point of the base.

The long, slender, slightly-arched neck is strong yet flat muscled. The skin is taut and smooth, without dewlap.

Forequarter angulation is moderate. The elastic shoulders are of moderate breadth at the withers; they are never loose. The shoulder blades are well laid back and at the point of the shoulder they join to a long, rather upright upper arm.

The elbows are positioned in front of the deepest part of the chest, and are well held in but not so much as to restrict movement. The long, strong, straight forelegs are close together and give the impression of a slim, fast animal. The pasterns are firm, broad and fairly upright. Removal of dewclaws from the forelegs is optional.

In proportion, the body is slightly longer than tall. The withers are high, dry and well defined. The back is long, straight and flexible, with strong but flat muscles. The slightly arched, well-muscled loin is of medium breadth. The croup is sloping with visible bone structure and hard muscles. The chest is deep and long but not broad, the brisket being approximately 2 inches above the elbow. The deepest part of the chest is behind the elbow. The forechest is pointed and strongly protruding. The ribs are flat. The abdomen is well tucked up but not exaggerated.

The hindquarters are vertical, with long, strong, flat muscles.

Long, with clean, fine bone. The hock is well angulated and broad. When viewed from behind, the hocks and rear pasterns are straight. Dewclaws may be removed.

Nearly a hare foot, with long, close toes and hard pads. There is profuse hair between the toes. The nails are generally white, but sometimes the same color as the coat. The front feet may toe out slightly.

The tail is set on low and is long enough to reach to the spine when it is pulled forward between the legs. Thicker at the set on, it tapers gradually to the tip, which should be covered with some longer, coarser, slightly off standing hairs. The tail hangs naturally in repose, and in motion is carried in a sickle or tightly curved shape, but preferably not upright nor curled too tightly over the back.

Two coat types are breed typical: Smooth, rough or long haired, and neither is preferred. Both types are left untrimmed.

The smooth coat should not be silky, but rough and shiny.

The long haired coat should be hard, wiry and very dense, shorter on the head and ears and somewhat longer on the rear of the thighs and the underside of the tail. The head is densely coated and a beard is highly valued. The longest hair should be at least two inches in length.

Acceptable colors include white or red, solid or in any combination. The red may be from a light yellowish-red (called "lion") to a deep red. No color or pattern is to be preferred over any other.

Disqualification: Any color other that white or red.

Height is measured at the withers. Height ranges are as follows: dogs, 23 to 27 inches; bitches, 22 to 26 inches. No size is preferred within these ranges. If an individual dog's height is slightly over or under the stated range, they are not to be faulted if all other characteristics are good.

The preferred movement is a suspended, single tracking trot, light and graceful with joint flexion.

(A dog with a Disqualification must not be considered for placement in a conformation event, and must be reported to UKC.)
Unilateral or bilateral cryptorchid.
Viciousness or extreme shyness.
Albinism.
Any color other than white or red.
Dark brown pigment or black spots on the nose leather. 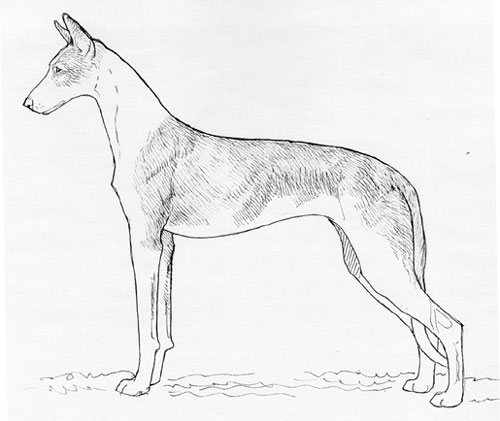