The Hungarian Wire-Haired Vizsla was recognized by the United Kennel Club January 1, 2006.

The Hungarian Wire-Haired Vizsla is a medium-sized, wire-coated hunting dog, with a distinguished appearance and bearing. They have a lean build and are very robust. The coat is an attractive russet gold. This is a dog of power and drive in the field, yet is a tractable and affectionate companion in the home. Field-conditioned coats, as well as a brawny or sinewy muscular condition, and honorable scars, indicating a working hunting dog, are never to be penalized. The qualities that make a “dual dog” are always to be appreciated, not depreciated.

The Hungarian Wire-Haired Vizsla is a versatile, natural hunter endowed with an excellent nose and an above average trainability. Although they are lively, gentle mannered, demonstrably affectionate and sensitive, they are also fearless and possessed of a well-developed protective instinct. The breed has a firmness on point, is an excellent retriever, and has the determination to remain on the scent even when swimming. The overall appearance embodies the qualities of a multi-purpose pointing dog, endurance, working ability and an easily satisfied nature.

Body length slightly exceeds the height, measured at the withers. The skin is tightly-fitting, well-pigmented.

Blunt, not pointed. Strongly muscled, powerful jaws. Slightly shorter than half the length of the head. The lips are tight-fitting, and the flews are clean. The bridge of the nose is straight.

The Hungarian Wire-Haired Vizsla has a full complement (42) of evenly spaced, white teeth meeting in a scissors bite.

Broad, and well-developed, with nostrils as wide as possible. Nose pigment color is slightly darker than the coat color.

Set on at medium height, hanging closely to the cheeks, ending in a rounded V-shape. Slightly shorter than the (short-haired) Vizsla’s.

Legs are straight and parallel when viewed from the front, with strong, but never coarse, bone and good muscling. Viewed from the side, they are placed well under the body.

Length of leg from elbow to ground is slightly greater than one-half the height at the withers. Elbows are close to the body, but not tied in nor turning in or out. There is good angulation between upper arm and forearm. Pasterns are short and slightly sloping. Pastern joint is dry and sinewy.

Pronounced, muscular withers. Solid, well-muscled, taught, straight back. The short, broad, tight, muscular loin is straight or slightly arched. The broad, well-muscled croup is of sufficient length and slopes slightly to the tail.

The chest is deep, broad, well-developed and well-muscled. The forechest is moderately arched. The sternum extends as well back as possible. The sternum and the elbows are at the same level. The depth of the brisket (breastbone) is slightly less than half the height at the withers. The ribs are carried well back, with the last ribs moderately arched. The elegant, tight, slightly tucked up underline arches toward the rear.

Well-furnished with a dense coat. The tail is set on at medium height. It is strong at the base, then tapering. In countries where tail docking is not prohibited by law, the tail may be shortened by one-quarter. An undocked tail reaches down to the hock joint and is carried straight or slightly saber-like. On the move, the tail is raised up to the horizontal.

Wiry, close-lying, strong, dense, providing as much protection as possible against weather conditions and injuries. Not glossy. Three-quarters of an inch to 1¼ inches (2 to 3 cm.) in length. There is a dense, water-repellent undercoat. The outline of the body is not to be hidden by the longer coat.

The lower parts of the legs and the undersides of the chest and belly are covered with shorter, softer, slightly thinner hair. The hair on the head and ears is shorter and a little darker; however, it is not soft and dense.

Various shades of russet gold and dark sandy gold. The body is uniform in color but the ears may be a little darker. A small white patch on the chest no more than 2 inches (5 cm.) in diameter, as well as white markings on the toes are acceptable. Lip and eye rim pigment corresponds to the color of the nose.

Overall balance and symmetry are not to be compromised for size.

Typical gait is an animated, light-footed trot, elegant and far-reaching, with drive and corresponding reach. When working in the field the gallop is efficient; not exhausting. The back is firm and topline remains Level.

Any departure from the ideal should be considered a fault, and the seriousness with this it is to be regarded is to be in exact proportion to its degree.

(An Eliminating Fault is a Fault serious enough that it eliminates the dog from obtaining any awards in a conformation event.)
Undershot or overshot bites.
Wry mouth.
One or more missing incisors and/or canine and/or premolars 2-4 and/or molars 1-2. More than two missing PM1. Non-visible teeth are assessed as missing.
Distichiasis (double row of eyelashes).
Dark brown or pale yellow coat color.
Parti-colored.
White chest patch larger than 2 inches (5 cm.) in diameter.
White feet.
Thin coat, lacking undercoat. Long, soft, silky, shaggy, crinkle or woolly coat. Lacking brushes on the legs.
Deviation of more than ¾ of an inch from the listed acceptable height ranges. 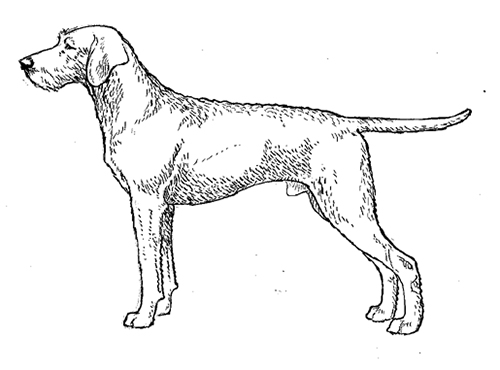