The Hokkaido is said to have originated from medium sized Japanese dogs that accompanied migrants from the main island of Japan to Hokkaido during the Kamakura era, which was in the 1140’s. When the breed was designated as a National Monument in 1937, it took the name of the region. It also became known as the Ainu-ken because the Ainu people, who were the former residents of Hokkaido, were said to have bred the dogs to hunt bear and other animals.

The Hokkaido was recognized by the United Kennel Club as the Ainu January 1, 1996, and the breed name was changed to Hokkaido in 2008.

The Hokkaido is a medium sized, spitz type breed that has strongly developed secondary sex characteristics. It is well balanced, sturdily built and strongly boned. The breed is capable of withstanding severe cold and heavy snowfall. Its tough, clean cut muscles give it great stamina.

The Hokkaido is a dog with great dignity. It has a faithful, docile, alert and bold temperament.

The skull is broad and slightly flat. It is approximately the same length as the width of the head at the cheeks. There is a shallow, but defined, stop.

The muzzle is wedge shaped, with a straight nasal bridge. It is about two-thirds the length of the skull. The lips are tight and have black edges.

The Hokkaido has a complete set of evenly spaced, white teeth meeting in a scissors bite.

The nose is black, except in white colored dogs, where a flesh colored nose is allowed.

The small, erect ears are triangular in shape and inclined slightly forward.

Powerful and muscular, with no dewlap.

The shoulders are moderately sloping.

The legs are straight and clean cut, with good bone and slightly sloping pasterns.

In proportion, the Hokkaido is slightly longer than tall in a ratio of 11:10. The chest is deep and moderately broad, with a well developed forechest. The ribs are well sprung. The withers are high and the back is straight and strong. The loin is moderately broad and muscular and the croup is slightly sloping. There is a good amount of tuck up.

The hindquarters are powerful, with strong hocks.

The feet have close, well arched toes and hard, elastic pads. The nails are hard and dark in color.

The tail is set on high. It is thick and carried over the back in a curl or in sickle shape. The tip nearly reaches the hocks when the tail is let down.

Double, with a harsh, straight outer coat and a soft, dense undercoat. The hair on the tail is fairly long and stands off in a brush.

At a trot, the gait is active, light and quick.

(A dog with a Disqualification must not be considered for placement in a conformation event, and must be reported to UKC.)
Unilateral or bilateral cryptorchid.
Viciousness or extreme shyness.
Albinism.
Extremely overshot or undershot bite.
Ears not prick.
Hanging or short tail. 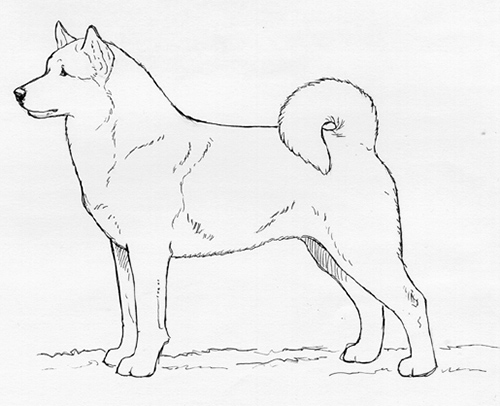