Also known as the "Bichon Havanais" (or 'Habanero'), and the "Havana Silk Dog", the Havanese breed is thought to be descended from the Old World Bichon types of small companion dogs, such as the often-painted Italian Bichon of Bologna (the Bolognese) or the Maltese. Over the centuries, interesting variations developed into separate breeds around major port cities of the Spanish Empire. The Havanese breed is the Bichon of Cuba. All published theories of their origin and development seem based on speculation, but it is certain that they were always a small breed which was exclusively owned by the higher social classes.
The Havanese was recognized by the United Kennel Club in July 1991.

Havanese are the Cuban representatives of the Bichon family of breeds, (all small, long coated and drop eared), which are prized as devoted companion dogs. Havanese coat colors are extremely varied.
Havanese appear rectangular from the side, being much longer from front to rear than they are tall. Havanese are light framed but sturdy dogs that convey a sense of refinement without appearing fragile. Males are slightly more muscular than females.

Havanese have a quiet and gentle disposition, but enjoy rowdy play sessions. They are affectionate, preferring to be at their owner's side or in the same room, and will alert their owner to approaching strangers. They enjoy the company of other Havanese. They are intelligent, easy to train and attentive to their handler.
Havanese have an alert, gentle expression produced by the combination of large dark eyes, dropped ears, long fur and an endearing habit of tilting their head when listening.

It is a balanced wedge shape of moderate size, slightly broad but always refined looking. The skull is a slightly rounded, slightly broad intermediate (mesaticephalic) type with a moderate stop.
The muzzle is balanced above and below the stop; tapering, with flat cheeks. The length of the muzzle is equal to the distance from the stop to the occiput. The lips are clean, tight and fully pigmented (except for the two small areas on the lower lip normally lightened by abrasion from the upper canine teeth).

A scissors bite and normal jaw formation are expected. Preference is to be given to a healthy, clean mouth with reasonably uncrowded, untwisted, strong, white teeth.

Rather large and oval shaped, deep set and dark. Eye rims must be fully pigmented.

Disqualifications: Less than full, dark pigment on eye rims, nose or lips of dogs over 12 weeks of age.

They are set slightly raised on the skull, and have dropped leathers of moderate size, which form a gentle fold.

The neck is sturdy, of moderate length and is well set into the shoulder region.

The front legs are relatively short and light boned, but not fragile. They provide a straight column of support when viewed from the front, are moderately angulated and have good reach. The length of the leg from the foot to the elbow is no longer than the distance from the elbow to the withers, and when standing naturally, the elbow is positioned at the lower edge of the rib cage. The front dewclaws may be removed.

The straight topline is not level, but rises gradually to the rear. The body, from the prosternum on the forechest to the point of the rump, is about two-thirds longer than the height at the withers. The ribs are well sprung, deep and carried well back. The flanks are tucked up. The loin is strong; the rounded croup is well dropped.

The back legs provide a straight column of support when viewed from the rear, are moderately angulated, normally flexible and deliver strong drive.

The feet are small, compact and well cushioned, with toes a little elongated. The rear feet are smaller than the front pair. Nails should be kept reasonably short.

The tail is set smoothly on the body in a moderate position, and carried over the back.

The breed’s profuse double coat is very soft. The hair on the head blends the face and ears together, forming a hood onto the shoulders and chest. The hair on the forehead may form a curtain in front of the eyes, depending on the texture and length. For safety reasons, this hair may be held away from the face by unadorned rubber bands. In Conformation events, Judges can require the removal of bands which impede evaluation of the dog.
The long adult coat, which may take two or four years to develop fully, must not touch the ground. The tail is covered with a long, silky plume which blends into the body coat when resting. The coat tends to form narrow sections, or "locks", which show the unique "lacey" or ric-rac braid effect of hair sectioned and braided when wet. This distinctive wave-style has a wide range of expression, from "quite relaxed" (but not very straight), to a very "tight", which can be corded. The correct "lacey" effect is most evident on the ears, legs, rump and tail, but if straightened by grooming will take hours to return unless wetted. (The degree of "tightness" in a lacey coat is not to be considered until definitive historical research verifies what was correct, but straight coats are clearly incorrect.)

None of the hair is to be scissored, except: for neatening around the edge of the feet. The tiniest possible trimming is permitted for good hygiene at the inner corner of the eyes, at the vent, and as needed on the belly. The hair between the foot pads must be trimmed to allow safe movement. The hair is not to be parted along the spine. The hair on the forehead may form a curtain in front of the eyes, depending on its texture and length. For safety reasons, this hair may be held away from the face by unadorned rubber bands. In Conformation events, Judges can require removal of bands which impede evaluation of the dog. A small braid starting above each eye and hanging down to the side is a permitted ring alternative. The Stud Dog or Brood Bitch class entries may have simple, shortened coats.

Disqualifications: A coarse or wiry coat texture. In adults, the complete absence of guard hairs or undercoat.

All colors are acceptable; singly or in any combination. In fact, great diversity of coloring is this breed's heritage. Many colors lighten or darken with age or whelping; residual dark tipping may remain. All colors develop a matte appearance.
All pigment on eye rims, nose and lips must be complete and dark. Except for the true chocolate-coated dogs, which have dark brown/liver colored pigment, all other coat colors require jet black pigment.

Havanese stand between 8½ inches and 10½ inches in height, and weigh from 7 to 14 pounds (with mid size much preferred). Height limits are more important than weight.

Disqualifications: Weight under 7 or over 14 pounds.

Havanese have a lively, springy trot. They love fast sprints in a rotary gallop, even using a half-bound to gain a burst of speed; yet they enjoy long, easy walks. They are excellent broad and high jumpers. As speed increases, the dog single tracks.

Serious Fault: Tail not carried over the back when gaiting.
Faults: Hackney gait in front. Padding. Moving too close behind.

(An Eliminating Fault is a Fault serious enough that it eliminates the dog from obtaining any awards in a conformation event.)
Height under 8½ inches or over 10½ inches.

(A dog with a Disqualification must not be considered for placement in a bench show/conformation event, and must be reported to UKC.)
Unilateral or bilateral cryptorchid.
Viciousness or extreme shyness.
Albinism.
Overshot bite.
Undershot bite.
Wry mouth.
Severely crowded or twisted teeth.
A coarse or wiry coat texture.
In adults, the complete absence of guard hairs or undercoat.
Weight under 7 or over 14 pounds.
Less than full, dark pigment on eye rims, nose or lips of dogs over 12 weeks of age. 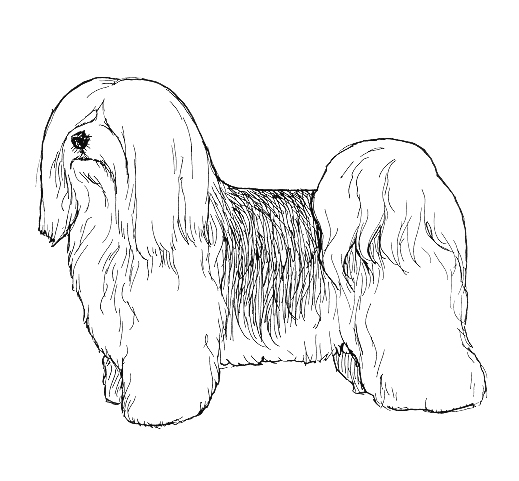