Hound breeds have been known in Sweden since the 16th Century. Until 1789, hunting with hounds was a privilege for royalty only. When the ban that had prevented peasantry from hunting the lands was lifted, hounds earlier kept only by the royalty became well known and widespread. The origin of the Hamiltonstovare is thought to be a mixture of scenthounds from Southern Germany and Switzerland, as well as Foxhounds and Harriers. The breed is used for hunting hare and fox. It is not a pack hound, and is never used to hunt deer.

The Hamiltonstovare was recognized by the United Kennel Club in 2006.

A short coated, tricolor, well proportioned hound that gives the impression of great strength and stamina. They are longer than tall. Secondary sex characteristics should be clearly defined. Females are slightly more refined, with a shorter stature, and a tighter head piece.

Friendly and even tempered. Focused and driven, with a regal bearing.

The head is fairly long.

The skull is slightly arched and moderately broad. The stop is well defined, but not abrupt. Distance from occiput to stop should be equal to that from stop to tip of nose.

The muzzle is as long as the skull, strong and nearly rectangular. The nasal bridge is straight and parallel to the top line of the skull. The cheeks are lean. The lips are rather thin and rounded. Males should have more lip than females.

The Hamiltonstovare has a complete set of evenly spaced, white teeth meeting in a scissors bite.

The eyes are dark brown, and have a calm expression. Eye rims are black.

The ears are set fairly high. When they are pulled forward, they should reach no more than halfway to the end of the muzzle. They are soft and flat, and hang close to the cheeks without folding.

Long, powerful, and set well into the shoulders; with tight skin. Males should have a distinct arch at the top of the neck.

The shoulders are long, muscular, well laid back, and close to the body. The upper arms are long, and form a right angle with the shoulder blades.

The forelegs are straight and parallel, with strong bone. The elbows fit close to the body. The pasterns are springy and slightly sloping.
Dewclaws may be removed.

The body is rectangular in shape. The chest is deep, long, and well developed, reaching to the elbows. The ribs are moderately sprung. The withers are well defined, and the back is level and powerful. The loin is muscular and slightly arched. The croup is long, broad and slightly sloping. The belly is only slightly tucked up.

The muscles are well developed. The thighs are broad when viewed from the side.

The stifles and hocks are well angulated, and the rear pasterns are short, lean and straight.
Rear dewclaws may be removed

The tail is set on the line of the croup. It is thick at the base and tapers to the tip, long enough to reach to the hock. It is straight or slightly curved in saber fashion, and carried not much above the line of the back.

The coat is harsh and lies close to the body. On the head, ears and front of the legs, the coat is short and smooth. Under the tail and on the back of the thighs it is longer, but does not form a fringe.

Faults: Black and brown hairs mixed together. White markings other than those described. Heavy black markings that cover the sides of the trunk and the shoulders and thighs.
Serious Faults: Partial or full white collar. Two colored (yellow and white, black and white, black and tan).
Disqualification: Albinism.

Eliminating Faults: Over or under the height ranges.

(An Eliminating Fault is a Fault serious enough that it eliminates the dog from obtaining any awards in a conformation event.)
Over or under the height ranges.

(A dog with a Disqualification must not be considered for placement in a conformation event, and must be reported to UKC.)
Unilateral or bilateral cryptorchid.
Viciousness or extreme shyness.
Albinism.
Pronounced over or undershot bite. 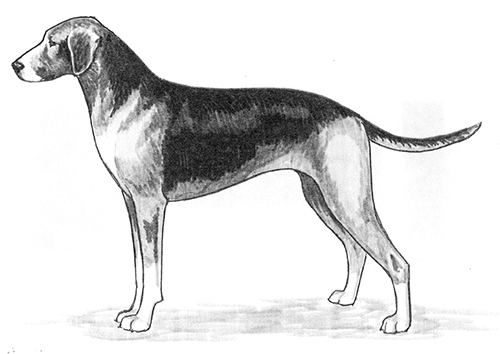