Rough-coated hounds, used by farmers and shepherds to control wolves and wild boars, have been bred in the highlands of Central France for many centuries. After the French Revolution, a renewed interest in this type of dog precipitated the development of the Griffon Nivernais, originally known as the Griffon-Vendeen-Nivernais. They are known as wild boar hunters without compare.

The Griffon Nivernais was recognized by the United Kennel Club on January 1, 1995.

The Griffon Nivernais is very typey in a rustic sense; shaggy and unkempt looking due to its hard, tousled coat. It is robust and dry muscled, built for endurance instead of speed. It has a sorrowful expression, but is not timorous.

A very good hunter, the breed is courageous but not reckless, and is well suited to hunt wild boar in small packs. Though easily taught to hunt, the Griffon Nivernais can be stubborn and independent and should be taught to obey at an early age.

The moderately long head is clean and light, but not small.

The skull is almost flat. The stop is slight, but is accentuated by the eyebrows.

The muzzle is the same length as the skull. It tapers slightly in width from the eyes to the nose, but is never pointed. The lips just cover the lower jaw.

The prominent nose is black in color.

The eyes are very expressive, with a lively, penetrating gaze. A dark eye is preferred, but a light eye is acceptable. The eyelids are tight and well pigmented.

The ears are supple and fine, attached at the level of the eye, and hanging with a slight inward turn at the end. They are long enough to reach the nose.

The neck is rather light and dry.

The shoulders are slightly sloping, and the upper arms incline to set the forelegs well under the body.
FORELEGS The forelegs appear very strong because of the hair covering. In reality they are clean and dry rather than thick. The elbows are close to the body, and the pasterns are short and slightly sloping.

In proportion, the body is slightly longer than it is tall. The deep chest extends well down, nearly to the level of the elbows. The brisket, from the prosternum to the end of the breastbone, is moderate, not too wide nor too prominent. The rib cage is deep and carried well back. The first ribs are a little flat; the rear ribs are more rounded. The topline is level from the withers to the loin, which is very slightly arched. The croup is bony and a little slanting. There is a moderate tuck-up, but it is not exaggerated.

The slope of the pelvis sets the hindquarters slightly under the dog.

The thighs are clean and rather flat. The low-set hocks are well angulated.

Oval in shape, and rather long, like a hare foot. The toes are solid and close together, and the pads and nails are well pigmented.

The tail is set fairly high, and is not too long. It is carried saber fashion and may be bent somewhat forward over the back.

The eyebrows are well marked with hair. The muzzle has a slight moustache. The ears are hairy.

The skin is supple, close fitting and rather thick. There are black spots on the body and the lips are well pigmented.

Faults: Lack of skin pigmentation such as on the nose, lips, eyerims or scrotum.

Preferred colors include wolf gray, blue gray, and wild boar gray (gray grizzle), with tan on the heads and legs, and fawn, with white and black hairs mixed in, giving a dark look. The coat is most often marked with tan points, which are prominent in young dogs and diminish with maturity.

The preferred height range for males is from 21½ to 24½ inches, and for females, from 20½ to 23½ inches. A ¾-inch leeway on either end is permitted for hounds of quality.

Movement is supple and easy.

(A dog with a Disqualification must not be considered for placement in a conformation event, and must be reported to UKC.)
Unilateral or bilateral cryptorchid.
Viciousness or extreme shyness.
Albinism.
Overshot or undershot bite. 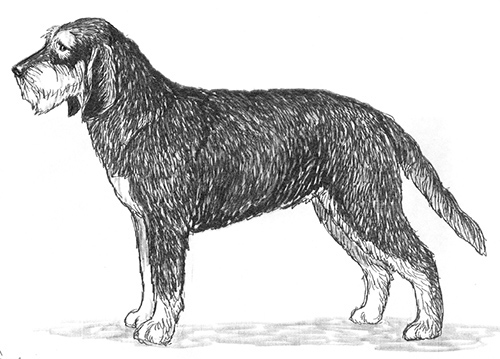