The Griffon Fauve de Bretagne is one of the oldest of the French scenthound breeds. There was a pack in existence in the 14th Century. They were used to hunt wolves until those disappeared, then on hare, roe deer, fox and wild boar.

The Griffon Fauve de Bretagne was recognized by the United Kennel Club January 1, 1996.

Bony, muscular and active, the Griffon Fauve de Bretagne is a good endurance dog, resistant to weather conditions and suitable to difficult terrain.

Enterprising and efficient hunters, but also sociable, equable and affectionate with people.

The skull is rather long and slightly arched. It is widest between the ears, tapering towards the eyes. The occiput is prominent. The stop is only slightly marked.

The muzzle tapers slightly from eyes to nose. The lips well cover the lower jaw but are not pendulous.

The Griffon Fauve de Bretagne has a complete set of evenly spaced, white teeth meeting in a scissors bite. The absence of the first premolars is not a fault.

Dark brown in color, with tight rims and a lively expression.

Set on a line with the eye, the ears are finely attached, end in a point, are slightly turned, and reach just to the end of the nose.

Muscular, and rather short.

The shoulders are sloping.

The elbows are in line with the body. The legs are straight, with good bone. The pasterns are slightly sloping.

The chest is deep and broad, and the ribs are rather rounded. The back is short, broad and firm. The loin is broad and muscular, and there is only a slight tuck up.

The legs are long and muscular. The hocks are well let down and moderately bent. The rear pasterns are vertical.

Disqualification: The presence of dewclaws.

Medium length and thick at the base, the tail is carried slightly sickle fashioned. It has bristly hair and swings from side to side when the dog is in action.

Very rough, harsh, and rather short. The face should not be too bushy.

Any shade of fawn, from golden to red. A few black hairs are tolerated, as is a white star on the chest.

Height at the withers for both males, and females is from 19 to 22 inches.

Supple and even, with no bounce.

(An Eliminating Fault is a Fault serious enough that it eliminates the dog from obtaining any awards in a conformation event.)
Oversize or undersize.

(A dog with a Disqualification must not be considered for placement in a conformation event, and must be reported to UKC.)
Unilateral or bilateral cryptorchid.
Viciousness or extreme shyness.
Albinism.
Overshot or undershot.
The presence of dewclaws. 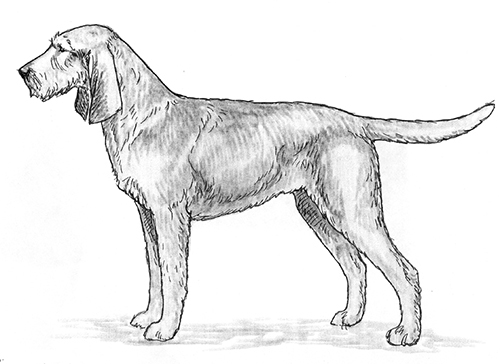