The ancestors of the Great Dane include British mastiffs and possibly wolfhounds, brought to Europe, first by the Romans and later by German aristocrats seeking to improve their hunting dogs. Despite its name, the Great Dane is a German breed. During the 15th and 16th centuries, German forests were filled with game, and hunting wild boar with dogs was a favorite pastime of German nobility. Each lord kept large numbers of boarhounds, which they carefully bred to improve their size, power, and endurance. When game in the forests began to dwindle, the large breeding kennels disappeared but the Great Dane continued to be a favorite with German aristocrats. Great Danes were exhibited at the first German dog show in 1863, and the first Danes were imported into the United States not long thereafter. In this country, Great Danes are popular family companions for people who admire their regal appearance and affectionate personalities.
The Great Dane was recognized by United Kennel Club in 1923.

The Great Dane is a very large, short-coated dog, with smooth, well-defined musculature. The body is square, but females may be somewhat longer in body than males. The length of the front leg (measured from point of elbow to the ground) is approximately equal to one-half of the dogs height at the withers. The head is long, rectangular, and finely chiseled. Ears are medium in size, high set, and may be drop or cropped. The tail is a natural extension of the spine, thick at the base and tapering to a point. Gender differences are apparent in this breed. Typically the male is proportionately taller and heavier than the female. The female appears feminine in comparison to the dog. The Great Dane combines great size with dignity and elegance, giving rise to its nickname, the Apollo of dogs.

The Great Dane is spirited, courageous, friendly, and dependable. Great Danes are easygoing dogs, affectionate with family members and self-confident with strangers. The Great Dane has a stable, easy-going nature, preferring to lounge on the couch near a loved one to almost any other pastime. They are good with children but their great size makes them more suitable for older children and teenagers. Great Danes are easily trained but need consistency.

The Great Dane head is proportionate to the size of the dog, long, rectangular, narrow and finely chiseled, especially below the eyes. Viewed from the side, the skull and muzzle are of equal length, straight, parallel to one another, and joined by a strongly pronounced stop. Viewed from above, the planes of the skull and foreface are parallel and the bridge of the nose is very broad. Gender difference is readily apparent. A correct head is essential to Great Dane breed type.

The skull is narrow, long and nearly flat, with parallel sides. Cheeks are clean and cheek muscles are not prominent. Supraorbital ridges are well developed.

The nose is black, except for blue Danes where the nose is a dark blue-black. A black spotted nose is permitted on Harlequins and Merles.
Fault: Pink nose.
Disqualification: Split nose.

Eyes are medium in size, almond-shaped, tight, and dark brown. A slightly lighter shade of brown is acceptable, but not preferred, in the blue Danes. In Harlequins and Merles, the eyes should be dark, but blue eye(s), and eyes of different colors are permitted.
Faults: Round or protruding eyes; yellow eyes; eyes too close together.
Serious Faults: Visible haw; obliquely set Mongolian eyes; functional abnormality of eyelids or eyelashes.

Ears may be cropped or natural, with no preference. Ears are high set and of moderate thickness. Natural ears are medium in size and fold forward close to the cheek. The top line of the ear fold is level with the skull. Cropped ears should be in proportion to the size of the head and stand erect, but a dog with properly set ears must not be penalized for an imperfect ear crop.
Faults: Any deviation from the standard that contributes to a hound-like appearance.

The neck is long, well arched, and muscular. From the nape, the neck gradually broadens and flows smoothly into the shoulders. The underline of the neck is clean.
Faults: Short, thick neck; ewe neck, goose neck.

Shoulder blades and upper arms are long and slanting, forming an angle of approximately 110 degrees.

The elbows are close to the body. A line drawn from the upper tip of the shoulder blade to the back of the elbow joint will be perpendicular to the ground. The forelegs are straight with strong, slightly sloping pasterns.
Faults: Toeing in or out; down in pasterns.

The Great Dane is a square dog. Its height, measured from the withers to the ground, should equal its length of body, measured from prosternum to point of buttocks. The length of the forelegs (measured from point of elbow to the ground) should approximately equal one-half of the dogs height. The withers flow smoothly into a short, level back. The ribs extend well back and are well sprung out from the spine. The loin is short and broad, with a well-defined tuck-up. The croup is broad and very slightly sloping. The chest is broad, well muscled, and deep, extending to the elbows. The forechest is well developed. The body underline is tightly muscled.

The hind legs are strong and well angulated. When the dog is standing, the short, strong rear pasterns are perpendicular to the ground and, viewed from the rear, parallel to one another.
Faults: Steep croup; lack of rear angulation; over-angulation; cow hocks; open hocks.

Feet are round, tight, and well arched. Nails are strong and as dark as possible, except that they may be lighter in Harlequins, Mantles, and Merles. Front dewclaws may be removed.
Faults: Hare foot; splay foot.
Serious Fault: Rear dewclaws.

The tail is a natural extension of the topline. It is thick at the base and tapers to the tip. A tail of the correct length extends to the hock but never below. When the dog is relaxed, the tail hangs down naturally. When the dog is moving or alert, the tail may curve slightly upward but never above the level of the back.
Serious Faults: Ring or hooked tail.
Disqualification: Docked tail.

The coat is short, close, and thick with a smooth, glossy appearance.

When trotting, the gait is effortless, with long, easy strides, and showing good but not exaggerated reach in front and drive behind. When moving, the topline remains level with only a slight flexing to indicate suppleness. Viewed from any position, legs turn neither in nor out, nor do feet cross or interfere with each other. As speed increases, feet tend to converge toward centerline of balance.

(A dog with a Disqualification must not be considered for placement in a conformation event, and must be reported to UKC.)
Unilateral or bilateral cryptorchid.
Viciousness or extreme shyness.
Split nose.
Docked tail.
Color other than those described in Color paragraph.
Merlequin, a white dog with only patches of merle.
Albinism. 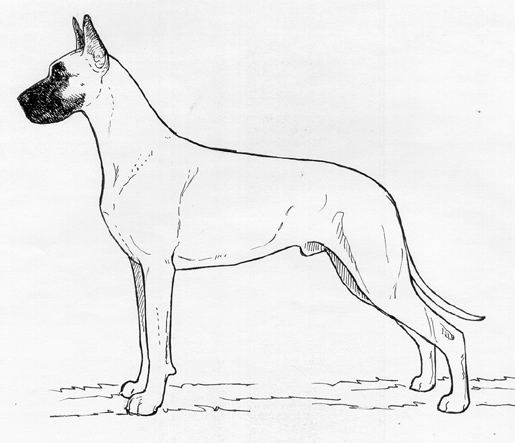