A strong and powerful dog that shows more English influence in his head than his White and Black cousin.

Quite short and broad.

Rather broad and flat, without occipital protuberance. The superciliary arches are not prominent. The stop is well marked.

The muzzle is fairly short. The lips extend over the lower jaw and give the muzzle some squareness.

The Great Anglo-Francais White and Orange Hound has a complete set of evenly spaced, white teeth meeting in a scissors bite.

Set on at eye level, broad at the base, and rather short. The ears are quite thick and turn in slightly.

The neck is straight, with a slight dewlap.

The shoulders are close to the chest, but well muscled.

The chest is deep. The ribs are long and lightly sprung. The back is broad and muscular. The loin is broad and short, and the croup is rounded. The flank is well filled.

The thighs are muscular and fleshy. The hocks are slightly bent and close to the ground.

The feet are rather round.

The tail is quite long, and has a slight brush.

Short and not too thick.

White and lemon, or white and orange, but the orange must not tend towards red.

Fault: Black or red hair in the coat. 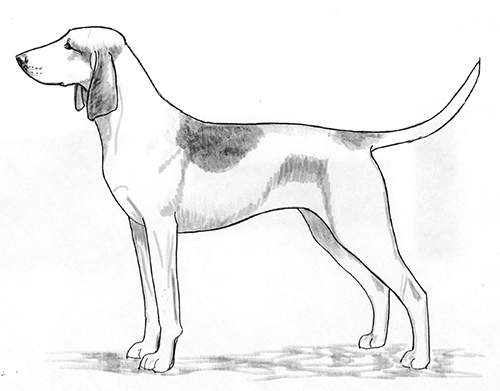