The Great Anglo-Francais Tricolor Hound was recognized by the United Kennel Club in 2006.

A solid dog with a distinctive air, reminiscent of its Foxhound ancestors.

Moderately broad and rather flat, with a slight prominence of occiput, and superciliary arches, and a marked stop.

About the same length as the skull, well chiseled below the eyes, with a straight nasal bone. The lips give the muzzle a square appearance.

The Great Anglo-Francais Tricolor Hound has a complete set of evenly spaced, white teeth meeting in a scissors bite.

Large and brown, with dark eyerims.

Set at eye level, medium length, flat at the base and then slightly curled.

Rather long and strong, with no dewlap.

The shoulder blades are long and flat.

The chest is deep and broad. The ribs are long and rounded. The back is straight and well supported. The loin is short and muscular, and the croup is long and sloping. The flank is rather full and slightly tucked up.

The thighs are well muscled and fleshy. The hocks are broad, low and slightly angulated.

Lean and rather round.

Of good length, carried elegantly, and well furnished with brush.

Hound tri-color, with a black blanket or black patches. Tan is bright and without black shading. 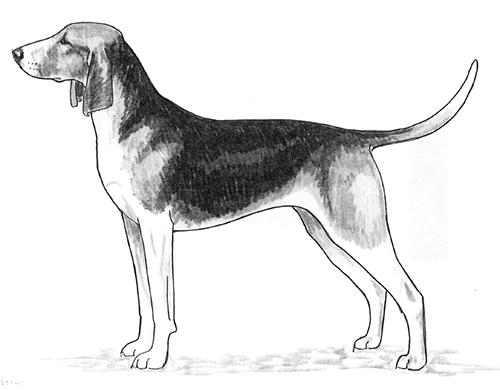