In the early 16th Century, a breed known as the Grand Vendeen existed. It was a short coated Vendeen bred down from ‘the King’s white hounds’. When the Grand Vendeen was crossed with several of the other Griffon breeds, the Grand Griffon Vendeen was born. It was used on large game such as stag, roe deer, wild boar and fox, generally in a pack.

The Grand Griffon Vendeen was recognized by the United Kennel Club January 1, 1996.

A distinguished breed, very French in type, the Grand Griffon Vendeen is well proportioned and robust without being heavy.

Docile, but willful and passionate because of its strong hunting instinct, the Grand Griffon Vendeen has to be kept well in hand.

The skull is not too wide. Viewed from the front, it is fairly well domed. The stop is slightly defined.

The muzzle is as long as the skull. It is strong, and has a straight or slightly convex nasal bone. The lips are pendulous and well cover the lower jaw, giving the muzzle a square appearance.

The Grand Griffon Vendeen has a complete set of evenly spaced, white teeth meeting in a scissors bite.

Large, with well opened nostrils, the nose is black except in white and orange dogs, which may have brown noses. It must be fully pigmented.

The eyes are large, dark and bright, with tight rims that are fully pigmented.

The ears are supple, narrow and fine, ending in an elongated oval. They are set below the level of the eye and must reach beyond the end of the nose.

Elegant, with no dewlap.

The forequarters are powerful, with long, lean, sloping shoulders.

The elbows are close to the body, and the forearms are straight with strong bone and fairly upright pasterns.

The chest is deep to the elbow but not too wide. The ribs are long and moderately rounded. The back is solid, and is straight or slightly sloping. The loin is well muscled and the croup is flat. The flank is slightly tucked up.

The hindquarters are solid, with hip bones that are apparent.

The thighs are long and muscular. The hock joint is broad and well let down, with moderate angulation.

The tail is rather long, thick at the base, and tapering towards the tip. It is set high and carried in saber fashion, but never curled over the back.

Fairly long, coarse and hard, with a dense undercoat. The eyebrows and moustache are well pronounced, but the eyebrows must not cover the eyes.

White and black, white and orange, black and tan, tricolor, fawn with black overlay (with or without white spotting). Traditional colors such as hare, wolf, badger or wild boar.

Supple, even and active.

(An Eliminating Fault is a Fault serious enough that it eliminates the dog from obtaining any awards in a conformation event.)
Oversize or undersize.

(A dog with a Disqualification must not be considered for placement in a conformation event, and must be reported to UKC.)
Unilateral or bilateral cryptorchid.
Viciousness or extreme shyness.
Albinism.
Overshot or undershot.
Dudley nose.
Wall eyes.
Kinked tail.
Woolly coat.
Solid white or solid black. 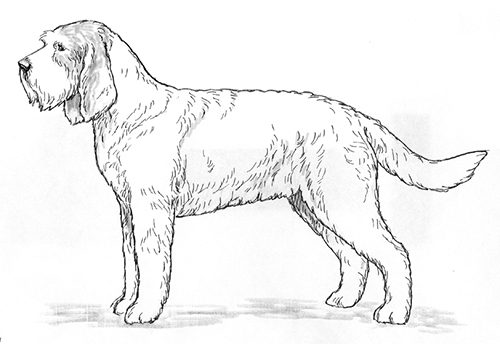