The Gordon is the only gun dog developed in Scotland. The breed was stabilized by Alexander, the fourth Duke of Gordon, between the years of 1770 to 1820. It was originally called the Gordon Castle Setter. The Duke wanted a heavier type of setter of pleasing conformation, with keen scenting power, and well adapted to his Scottish environment. Some of the breeds mentioned in the dog’s ancestry are the “colley” and bloodhound. This may account for the dogs coloring. He may be a slower hunter than the English Setter, but there is less variation within the Gordon bench and field type than there is between the bench and field type of the English and Irish Setters. This is to the breeders’ credit.

The Gordon Setter was recognized by the United Kennel Club in 1949.

A black and tan pointing dog weighing from 45 to 80 pounds, and being 23 to 27 inches at the withers, depending on sex. He has a natural ear and tail, with a medium-length coat.

A sturdy hunting dog. Generally good natured. Not as wide working or as speedy as some of the other pointing breeds.

The head is deep rather than broad, lean above and below the eyes, with a clearly defined stop.

The muzzle is long, and should have nearly parallel lines, not be pointed when viewed from the side or from above. The flews are not pendulous, but there are clearly indicated lips.

A full complement of strong, white teeth meet in an even bite. Not overshot or undershot.

Of fair size, oval in shape, not too deep nor too prominent, but set sufficiently under the brows to show a keen and intelligent expression. Dark brown in color.

Set low on the head and lying close to it, of medium size, and thin.

Long, lean and arched to the head and without any throatiness.

The shoulder blades should slope well back. They are wide and flat, and fairly close together at the withers. FORELEGS Straight, with elbows held close to the body and set well back, which gives freedom of action. Bone is big and flattened. Pasterns are strong and upright. Dewclaws may be removed.

Chest is deep, but not too broad. Body is of moderate length, with a deep brisket and well-sprung ribs. Back ribs are deep. Loins wide and slightly arched. Topline slopes slightly.

In proportion, the Gordon Setter is approximately square measured from breastbone to buttocks and withers to ground.

Pelvis should tend to the horizontal, with only a slight slope to the set-on of the tail.

Hind legs from hip to hock should be long, broad and muscular; hock to heel short and strong, stifles well bent. Hocks straight and parallel.

Oval and close knit, with well-arched toes, with plenty of hair between them. Full toes pads and deep heel cushions.

Fairly short in length, thick at the root and tapering to a fine point, it should not reach below the hock. Straight or slightly scimitar in shape, and carried horizontal or below the level of the back. (When pointing game, the higher and straighter the better. This is referred to as "good style.") The feathers, which start near the root, are long and straight, and growing shorter uniformly to the point.

On the head, front legs, and tips of ears should be short and fine, but on all other parts of the body and legs it is of moderate length, fairly flat and as free as possible from curl or wave. The feather on the upper portion of the ears should be long and silky, on the back of the hind legs long and fine; a fair amount of hair on the belly forming a nice fringe which may extend on chest and throat. All feathering to be as flat and straight as possible.

Deep, shining coal black, with no signs of rustiness, with tan markings of rich chestnut red. Tan should be lustrous. Black penciling on the toes, and also black streaking under jaw are permissible. The borderline between the black and tan colors should be clearly defined.

Tan markings should be located as follows:
1) Two clear spots over the eyes not over three-quarters of an inch in diameter;
2) On the sides of the muzzle, the tan should not reach above the base of the nose, but should resemble a stripe around the end of the muzzle from one side to the other;
3) On the throat;
4) Two large clear spots on the chest;
5) On the inside of the hind legs, down the stifle, and then broadening out to the outside of the hind legs from the hock to the toes;
6) On the forelegs from the carpus, or a little above, downward to the toes;
7) Around the vent.

A white spot on the chest is allowed, but the smaller the better.

The action of the Gordon Setter is a bold, strong, driving, free-swinging gait. The head is carried up, and the tail flags constantly while the dog is in motion. When viewed from the front, the forefeet move up and down in straight lines so that the shoulder, elbow and pastern joints are approximately in line with each other. When viewed from the rear, the hock, stifle and hip joints are approximately in line. The feet are not thrown in or out. The overall appearance of the moving dog is one of smooth-flowing, well-balanced rhythm, in which the action is pleasing to the eye, effortless, economical and harmonious.

(A dog with a Disqualification must not be considered for placement in a conformation event, and must be reported to UKC.)
Unilateral or bilateral cryptorchid.
Viciousness or extreme shyness.
Predominantly tan, red or buff dogs which do not have the typical pattern of markings of a Gordon Setter are ineligible for showing and are undesirable for breeding.
Albinism. 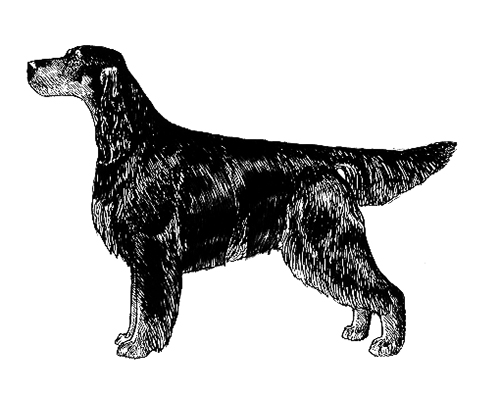