The Golden Retriever was developed in late 19th Century Scotland and England primarily by crossing Flat- and Wavy-coated Retrievers, Tweed Water Spaniels, and a red Setter. The Golden was bred by British aristocrats to be a dual-purpose dog, able to retrieve waterfowl and upland game birds and also to be a companion. Lord Tweedmouth produced some of the early foundation stock by mating a yellow Wavy-coated Retriever named Nous to his Tweed Water Spaniel, Belle. The Golden Retriever’s friendly disposition, attractive appearance, and high level of trainability have made this breed one of the most popular in the United States. Today, Goldens are found at field trials and dog shows, in family homes and nursing homes, leading the blind and serving as ears or hands for handicapped persons.

The Golden Retriever was recognized by the United Kennel Club in 1956.

The head is proportionate to the size of the dog and is without exaggeration of any sort. When viewed from the side, the skull and muzzle are roughly parallel to one another and joined by a well-defined, but not abrupt, stop.

The skull is broad and slightly arched laterally and longitudinally. The skull is clean without prominence of orbital arches or occipital bones. Cheeks should be clean.

The Golden Retriever has a complete set of evenly spaced, white teeth meeting in a scissors bite.

The nose leather is black. A slight fading of nose pigment (“winter nose”) is not serious. Nostrils must be large and open.

The eyes are set in to the skull, but not too deep, and wide apart. They are medium sized and somewhat triangular in appearance, but never so much as to give a hard expression. Eye color is brown. Darker brown is preferred, but a medium brown that does not detract from the desired kindly expression is acceptable. Eyelids are close-fitting, and eye rims are dark.

The ears are drop and rather short, with the front edges attached well behind and just above the eyes. When pulled forward, the tip of the ear should just cover the eye. The ear leather is pliable. The lower part of the ear should be well furred with short, soft hair. The hair is slightly longer where the ear attaches to the skull. At rest, the ears may be drawn back half folded into the neck ruff. When alert, the ears are drawn up and forward with the inner edges of the ears close to the cheeks. A Golden Retriever with a correct temperament will not normally keep its ears at the “alert” position for long periods of time, in or out of the show ring.

The neck is of medium length, blending smoothly into well laid back shoulders, giving a sturdy, muscular appearance. The neck is free of throatiness.

Shoulders are smoothly muscled. The shoulder blades are long and well laid back with the upper tips fairly close together at the withers. The upper arm appears to be equal in length to the shoulder blade and joins it at an apparent right angle. The elbows are close to the body. The forelegs are straight, strong and sturdy in bone, with strong, short, slightly sloping pasterns.

A properly proportioned Golden Retriever is slightly longer (measured from prosternum to point of buttocks) than tall (measured from the withers to the ground), and length of the front leg (measured from point of elbow to the ground) should approximately equal one-half of the dog’s height. Whether the dog is standing or moving, the line of the back is strong and level from the withers to the slightly sloping croup. The loin is moderately short, muscular and deep, with very little tuck-up. The ribs extend well back and are well sprung out from the spine, forming a broad, strong back, then curving down and inward to form a deep body. The brisket extends to the elbow. Viewed from the front, the chest between the forelegs is well filled and is at least as wide as a man’s closed hand.

The hindquarters are broad and muscular. In profile, the croup slopes slightly. The angulation of the hindquarters is in balance with the angulation of the forequarters. The stifles are well-bent, and the hocks are well let down. When the dog is standing, the short, strong rear pasterns are perpendicular to the ground and, viewed from the rear, parallel to one another.

Good feet are essential for a working retriever. The feet are of medium size, round and compact, with well-arched toes and thick, elastic pads. In the field, toenails help to grip the terrain so they should not be cut back so far as to be useless. Dewclaws may be removed. Excess hair around the feet and between the pads may be trimmed.

The tail is a natural extension of the topline. It is thick and muscular at the base and tapers to the tip. A tail of the correct length extends to the hock but never below. When the dog is relaxed, the tail hangs down naturally. When the dog is moving or alert, the tail is carried level with the back or only slightly above level, with a merry action. The tail should never curl over the back or be carried between the legs.

The Golden Retriever has a dense, water-repellent double coat. The outer coat lies close to the body and may be straight or wavy. The coat texture is firm and resilient, neither coarse nor silky. Undercoat is soft and dense. The untrimmed coat forms a natural ruff around the neck, blending into the front of the neck and chest; moderate feathering on the back of the forelegs and the underbody; and heavier feathering on the front of the chest, the back of the thighs, and the underside of the tail. Coat on the head, lower part of the ears, paws, and the front of the legs is short and even. Feet may be trimmed and stray hairs neatened, but neither the natural appearance of the coat nor the outline of the dog should be altered by trimming.

Color may be any shade of golden, but it must be rich and lustrous. Body color that approaches cream or red is undesirable. Some latitude may be given when judging a lighter-colored puppy whose coat shows promise of darkening with age. Feathering may be lighter than the rest of the coat, and lighter shadings extending upward from the underbody are typical and acceptable. These lighter shadings must not be confused with white markings. With the exception of graying or whitening of face or body due to age, any white marking, other than a few white hairs on the chest, should be penalized in proportion to its extent.

Serious Fault: Any noticeable area of black or other off-color hair.
Disqualification: Albinism.

Faults: Dogs up to one inch above or below standard height should be penalized proportionately.

When trotting, the gait is effortless, smooth, powerful and well coordinated, showing good but not exaggerated reach in front and drive behind. When moving, the dog’s head moves forward so that the head, back line, and tail are nearly even. The topline remains level with only a slight flexing to indicate suppleness. Viewed from any position, legs turn neither in nor out, nor do feet cross or interfere with each other. As speed increases, feet tend to converge toward center line of balance. It is recommended that dogs be shown on a loose lead and moved at a moderate speed to reflect true gait.

Poor movement should be penalized to the degree to which it reduces the Golden Retriever’s ability to perform the tasks it was bred to do.

(An Eliminating Fault is a Fault serious enough that it eliminates the dog from obtaining any awards in a conformation event.)
One inch or greater over or under the standard height.
Disqualifications
(A dog with a Disqualification must not be considered for placement in a conformation event, and must be reported to UKC.)
Unilateral or bilateral cryptorchid.
Viciousness or extreme shyness.
Overshot or undershot bite.
Albinism. 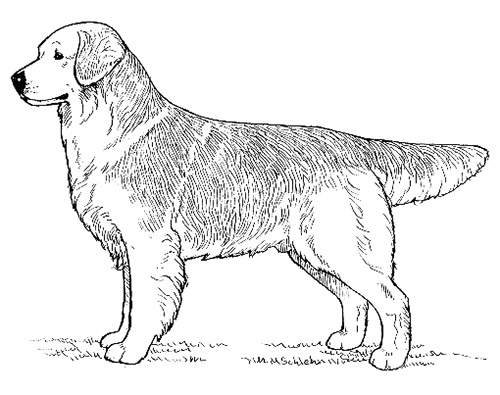