The first documented reference to a spitz being a valiant defender of his home and fields is from the year 1450. Many early members of the breed were from the province of Pomerania, hence the early name Pomeranian.

Starting out as a peasant’s dog, German Spitz became very popular with the royalty in the 18th Century. In Germany the breed is recognized with five size varieties, but when the Toy and Wolfspitz were exported to other countries they were recognized as separate breeds (the Pomeranian and the Keeshond), and in America the German Spitz is registered in two sizes, Mittel and Klein.

The German Spitz is a fairly new breed to America, and in recent years several have been imported from Germany, England and Australia in an effort to establish the breed in this country.

The German Spitz was recognized by the United Kennel Club in 2006.

The German Spitz is a compact, short coupled Nordic breed with a nearly square outline. It is well knit and firm, with good substance, and a profuse coat that comes in a variety of colors and markings. Males are distinctly masculine and females are distinctly feminine.

The breed is intelligent, active and alert, with a confident, happy disposition that shows no signs of nervousness or aggression.

The head is wedge-shaped, with clean cheeks and tight flews.

The skull is broad and nearly flat. The stop is moderately defined.

The muzzle tapers in width to the nose. It is approximately the same length as the skull. Lip color is black in the black, white, black and white parti-colors and black and tans. In other colors it matches the color of the coat.

The German Spitz has a complete set of evenly spaced, white teeth meeting in a scissors bite.

Fully pigmented, black in black, white, black and white parti-colors and black and tan dogs; in other colors it matches the color of the coat.

Medium sized, oval in shape, and set obliquely and not too far apart. The eyes are always dark in color, with fully pigmented eyerims that are compatible with the coat color.

Small, triangular, and set rather high, the ears are perfectly erect.

Clean, moderately short, and well set into the shoulders.

The shoulder blades are moderately sloping. The upper arms are approximately the same length as the shoulder blades, and set back on an angle that allows the elbow to be in a line directly below the withers.

The front legs are one-half the height at the withers. They are well-boned and straight, with strong, flexible pasterns.

The tail is high set, curled up from the root, and lies curled over the back.

Serious Fault: Any shaping of the body coat or excessive trimming.

All colors and markings are acceptable, including pure white.

At a trot, the gait is effortless and brisk, straight coming and going, and free from exaggeration. The topline remains level.

(An Eliminating Fault is a Fault serious enough that it eliminates the dog from obtaining any awards in a conformation event.)
Over 15 inches at the withers.

(A dog with a Disqualification must not be considered for placement in a conformation event, and must be reported to UKC.)
Unilateral or bilateral cryptorchid.
Viciousness or extreme shyness.
Albinism.
Butterfly nose.
Overshot or undershot bite.
Entropion or ectropion.
Semi-prick ears.

Effective January 1, 2010, in UKC Conformation Shows, this breed will show by variety in this order - Klein, Mittel. 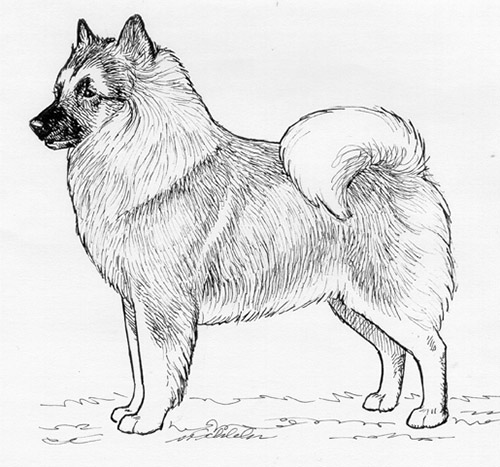