The German Pinscher has been recognized in Germany, its country of origin, since 1879. It was brought back from near extinction by Herr Werner Jung after the Second World War. After noting that no litters of the Deutsche Glattharr Pinscher (German Smooth Haired Pinscher) were recorded between 1949 and 1957, he literally started over, redeveloping the breed to standard by using an older purebred bitch, Kitti v. Bodestrand, initially using larger Miniature Pinschers. All present-day German Pinschers stem from this "founding mother".

The German Pinscher was recognized by the United Kennel Club in March 1991.

Alert, good natured, playful, high spirited, loyal, watchful, fearless, self possessed. Since the German Pinscher is considered a working dog, scars, the result of honorable wounds, shall not be considered faults, nor shall they be penalized by Judges.

The German Pinscher is well balanced, well muscled, powerful, squarely built, of medium size, and with elegant and flowing lines.

Seen from above and from the side, the head resembles a blunt wedge. It is strong but not heavy; elongated without a pronounced occiput.

The overall length of the head in proportion to the back, from the withers to the base of the tail, is approximately 1:2.

The top of the muzzle is parallel with the extended line of the unwrinkled, flat forehead. The muzzle is deep.

The stop is slight but distinct.

The cheek muscles are strong but not prominent. The nose is full and black. Dogs which are fawn, blue or red may have a nose of a corresponding shade.

The lips are tight and dark.

The ears may be cropped or left natural (uncropped). Either way, they are high on the head.
Cropped - equally cut to two-thirds of their original length, they are upright.
Uncropped - V-shaped, folded down close to the head.

The eyes are dark, oval in shape, medium sized, and are directed forward. The eyelids are snug.

The neck is elegant and strong. The nape is well arched. The skin of the throat is tight, without dewlap.

Fault: Neck too short or too stout.

The body is compact and short coupled. The length of the body is approximately equal to the height of the dog, measured at the withers.

The chest is moderately wide with flat ribs. The brisket extends below the elbows. The forechest extends beyond the point of the shoulder. The back is short and there is a slight rise over the loins.

The shoulder is well laid back with good, but flat, muscle. The forelegs are straight when viewed from all sides. Elbows are parallel and close to the body.

Seen from behind, the hindquarters are parallel, with sufficient length.

The upper thigh is slanted and strongly muscled. The stifle is of good length and bend. The hocks turn neither in nor out.

Well arched, compact and cat like, turning neither in nor out. The nails are dark. The pads are tough, hard and dark.

The tail is set and carried high. It is customarily docked between the second and third joints.

All solid colors from fawn (Isabella) to stag red, in various shades.

Markings are distributed as follows: at cheeks, lips, lower jaw, above eyes, at throat, at forechest as two triangles separated from each other, at metatarsus, forelegs, feet, inner side of hind legs and at vent region.

Movement is free, well balanced and vigorous, with good reach in front and a strong, rotary driving action from the rear. Gait is diagonally sequenced. The topline should remain strong and firm. Front and hind legs should not be thrown outwards.

Any departure from the preceding points should be considered a fault. The seriousness with which the fault should be regarded is in exact proportion to its degree of deviation.

(A dog with a Disqualification must not be considered for placement in a conformation event, and must be reported to UKC.)
Unilateral or bilateral cryptorchid.
Viciousness or extreme shyness.
Undershot bite.
Albinism. 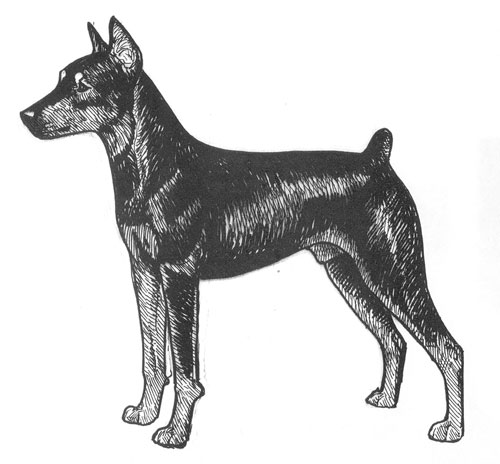