The Francais Blanc et Orange was recognized by the United Kennel Club January 20, 1996.

The head is quite large and somewhat long.

The skull is slightly domed. There is little prominence of occiput and the superciliary arches are not well developed. The stop is well marked.

The muzzle is almost as long as the skull. The lips are full, giving a square appearance to the muzzle.

The Francais Blanc et Orange has a complete set of evenly spaced, white teeth meeting in a scissors bite.

Well developed, and either black or brown in color.

Set low, supple and fine, slightly curled and reaching nearly to the nose.

Straight and quite long, with some dewlap acceptable.

The shoulders are muscular and sloping.

The chest is broad, and the ribs are rounded. The back is broad and straight. The loin is slightly arched. The croup is rounded but does not fall away. The flank is well filled.

The hindquarters are very muscular. The hocks are close to the ground and slightly bent.

White and lemon, or white and orange, but the orange may not be so dark as to appear red.

Height at the withers for males and females is 24.5 to 27.5, with a tolerance of one inch upwards.

Rather easy, light, and sustained. 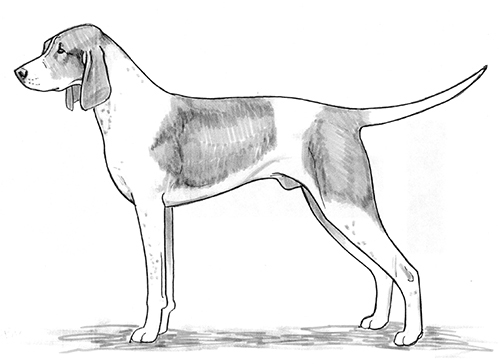