A native of Finland, the Finnish Spitz has the distinction of being that country's national dog. It is an old, established breed, and has had a written breed standard since 1812.

Its primary use was as a hunting dog, a heritage it honors to this day. The Finnish Spitz is often referred to as the “barking hunting dog” because of its characteristic continuous barking while on track.

The Finnish Spitz was recognized by the United Kennel Club in 1992.

The Northern Breeds heritage is evident in the pointed muzzle, small, erect ears, dense coat and curled tail of the Finnish Spitz.

The Finnish Spitz is square in proportions, the length from the forechest to the point of the buttocks being equal to the height, measured from the withers to the ground. A square, well-balanced, symmetrical body is of highest importance. Their expression is fox-like. Their coat is a glorious red-gold; carriage is bold; movement is brisk. Males are clearly masculine without being coarse, and females are feminine without being over-refined.

The Finnish Spitz is active, lively, friendly, eager and faithful. Its liveliness, in particular, is evident in its entire being, and is especially expressed through the eyes. It is brave, but cautious.

The fox-like head is clean cut. The distance from the occiput to the tip of the nose is more than the width of the skull, measured at the widest part, in a ratio of 7:4. This ratio still applies to females, even though their head may be more refined, with less coat or ruff.

The skull is flat between the ears, with some minimal rounding ahead of the ear set. The forehead is slightly arched. The frontal furrow is very shallow, and the occiput is only slightly visible. The ratio of skull to muzzle length is 4:3.

When viewed from above and in profile, the muzzle is narrow. It is of equal width and depth where it sets into the skull. It tapers evenly to the tip. The nasal bridge is straight, and the top lines of the skull and muzzle lie in nearly parallel planes. The thin, tight lips have black pigment. The lower jaw is clearly visible.

The Finnish Spitz has a full complement of strong, white teeth that meet in a close scissors bite.

Medium in size, almond shaped, set slightly obliquely, and preferably dark in color. The expression is lively and alert.

Faults: Eyes too far apart or too close together. Round. Light. Running or weepy.

Rather small and black.

Serious Fault: Any color other than black.

The small, erect, sharply pointed, very mobile ears are set on high, and covered with fine hair. When the dog is alert, the ears stand upward, are parallel and open toward the front, with the tips directly above the corner of the eyes.

Faults: Set too high, too low, or too close together. Long hair, excessive hair inside the ears.

The muscular, clean neck is well set. It may appear shorter in males due to their heavier ruff.

The body is muscular and square. The topline is level and strong from the withers to the slightly sloping croup. The loin is short. The chest is deep, reaching almost to the elbows, and not very broad. The forechest is clearly visible. The ratio of chest depth to total height (the distance from the withers to the ground), is 4:9. The ribs are slightly arched. The tuck-up is slightly drawn up.

The hindquarters are strong, with medium angulation.

Viewed from behind, the legs are straight and parallel. The bone is of medium strength. The upper thigh is rather broad and muscular and slightly longer than the second thigh. There is moderately angulation at the stifle and hock. The rear pasterns are rather short, strong and vertical. Dewclaws should be removed.

Roundish, with tight, well arched toes, and elastic, black pads that are well covered on the sides with dense hair.

The plumed tail is set on just below the level of the backline. It forms a single curl, curving vigorously from its base in an arch forward, downward and backward, falling over the loin, with the tip pointing toward, and extending to the middle part of the thigh. The tailbone reaches to the hock joint when the tail is straightened.

Faults: Low or high tail-set. Too curly. Too short.

The breed is double-coated. The long, harsh, straight guard hairs measure approximately one to two inches on the body. It is stiffer and longer on the neck and back. It is much more profuse in males, giving them a more ruffed appearance. The undercoat is short, soft and dense. The hair on the head and legs is short and close. It is longest and most dense on the tail plume and the back of the thighs. Males carry more coat than females.

The following varying shades are allowed, with no preference given to shades at either extreme, as long as the color is bright and clear: Golden-red, ranging from pale honey to a deep auburn.

Coat color is lighter on the inner sides of the ears, the cheeks, under the muzzle, on the chest and abdomen, behind the shoulders, inside the legs, on the backs of the thighs and on the underside of the tail. The undercoat is a paler color, causing the coat to appear to glow.

The following white markings are permitted: on the tips of the toes; and a quarter-sized spot or narrow white strip, ideally no wider than a half inch, on the forechest.

Faults: Muddy or unclear color. Any white other than specified.

Males are considerably larger than females. Height is measured at the withers. The ranges are: males, 17½ to 20 inches; females, 15½ to 18 inches.

Light and effortless, changing easily from trot to gallop, which is the most natural style of movement. The legs move parallel at slow speeds and tend towards a center line as speed increases. When hunting, this breed can burst explosively into a fast gallop. 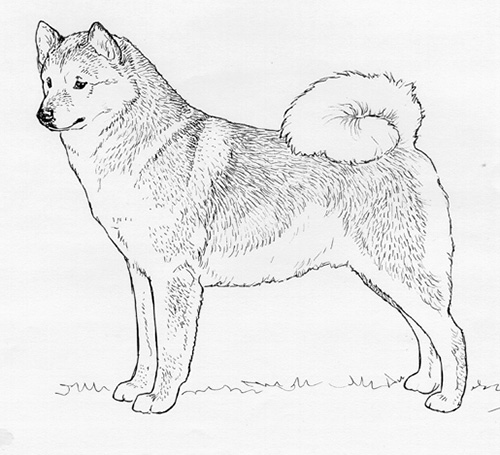