The Finnish Hound was recognized by the United Kennel Club January 1, 1996.

The Finnish Hound is a tri colored, medium sized, short coated hound that is strongly built but not heavy. Males and females should have distinctly marked sex characteristics.

The skull is even in width from the ears to the eyes. It is slightly domed on top. The forehead is slightly convex. The eyebrows and occiput are clearly visible. The stop is slight but clearly defined.

The muzzle is the same length as the skull. It is moderately deep and slightly tapering, with a straight nasal bridge. The lips are well developed, and the upper lip is beautifully curved.

The Finnish Hound has a complete set of evenly spaced, white teeth meeting in a scissors bite.

Medium size, oval in shape, dark brown in color. The eyes look straight forward. The eyerims are black, and the expression is calm.

Set on a level with the eye, the ears are hanging with the front edge close to the head. When pulled forward they reach halfway to the end of the nose.

Medium length, muscular and clean, with a slight arch at the crest.

The forequarters are well angulated. The shoulder blade and upper arm are equal in length.

The legs are straight and parallel, with strong, oval shaped bone. The elbows set well back under and close to the body. The pasterns are slightly sloping.

In proportion, the body is slightly longer than tall. The chest is long, broad, and deep to the elbow. There is visible forechest. The ribs are well sprung. The back is medium length, straight and muscular. The loin is short and powerful, and the croup is gently sloping. There is a slight tuck up.

The hindquarters are strong and well angulated.

Low set, strong at the root, tapering to the hock. The tail is carried low, not above the line of the back.

Double, with a medium length, straight, dense and harsh outer coat that is close lying and a short, dense soft undercoat.

Light and long reaching, with a firm level back, and parallel movement of the legs.

(An Eliminating Fault is a Fault serious enough that it eliminates the dog from obtaining any awards in a conformation event.)
Height more than one inch over or under the accepted range.

(A dog with a Disqualification must not be considered for placement in a conformation event, and must be reported to UKC.)
Unilateral or bilateral cryptorchid.
Viciousness or extreme shyness.
Albinism.
Undershot or overshot bite.
Dudley nose.
Kinked tail. 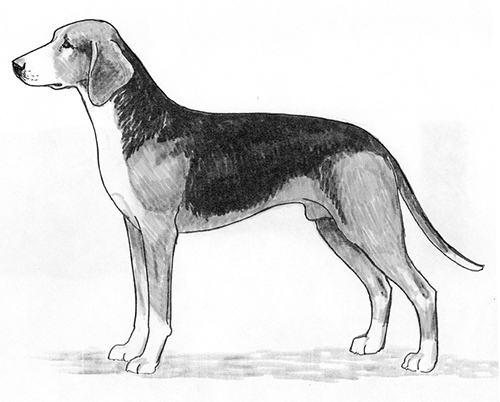