The Picardy Spaniel is descended from the old French spaniels that were crossed with English Setters and Gordon Setters. In 1921 the Picard Spaniel and Blue Picardy Spaniel Club was formed.

The Epagneul Picard was recognized by the United Kennel Club January 1, 1996.

A strong dog with a broad back and strong, well boned legs. The breed has gay head carriage, a gentle expression and very well constructed forequarters.

Wide and rounded, with a prominent occiput. The stop is sloping, not abrupt.

The muzzle is long and wide, tapering from the eyes to the nose. The nasal bridge is slightly arched. The lips are of medium thickness and slightly let down but not hanging.

The Epagneul Picard has a complete set of evenly spaced, white teeth meeting in a scissors bite.

Medium sized and brown in color.

Set on rather low, framing the face and covered with beautiful silky, wavy hair.

Muscular, and well set into the shoulders.

The shoulder blade is rather long and somewhat upright. The upper arm is well muscled.

The forelegs are straight, well muscled and feathered.

The chest is deep and sufficiently wide, reaching down to the level of the elbows. The topline slopes gently from the withers to the hip bones. The loin is straight, wide and full. The croup is rounded, and slightly sloping. The flanks are flat and deep with slight tuck up.

The haunches are prominent.

Straight, long, broad and well muscled. The hocks are slightly bent and the rear pasterns are straight. The hind legs are well feathered.

Round, large and tight, with a little feathering between the toes.

Set on not too high, hanging down in two slight curves, convex and concave. The tail is not too long and is furnished with silky feathering.

Dense and not too silky, fine on the head, and slightly wavy on the body.

Brown roan with brown patches on various parts of the body and at the tail root, generally with tan markings on the head and legs. 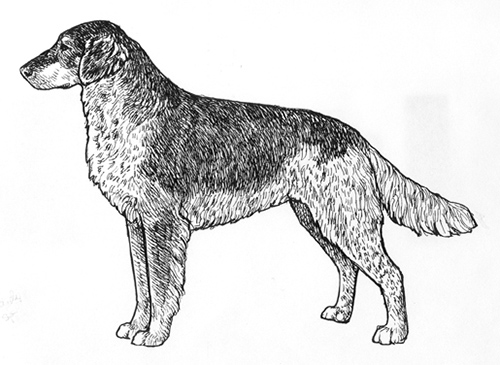