The Epagneul Bleu de Picardie was recognized by the United Kennel Club January 1, 1996.

Quite low to the ground dog, well built for work, a true Picardy spaniel.

Relatively wide and oval in shape, with a slight occipital crest. The stop is moderate but marked.

Quite long and broad, with thick, pendulous lips that form a square muzzle in profile.

The Epagneul Bleu de Picardie has a complete set of evenly spaced, white teeth meeting in a scissors bite.

The large, well opened eyes are dark in color, and show a calm expression.

Set slightly above eye level, with thick leather that reaches to the end of the nose, the ears are covered with beautiful wavy, silky hair.

The shoulder blade and upper arm are slightly oblique.

The chest is of medium depth. The ribs are nicely sprung, and descend to the elbow. The back and loin are strong, and not too long. The croup is slightly sloping.

The feet are round, a little broad, but not flat, and well furnished with hair between tightly closed toes.

The tail reaches approximately to the hock joint, and is straight.

Flat or slightly wavy, with good furnishings on the legs and tail.

Grey/black speckled, which forms a bluish shade, with black patches.

Height at the withers for males is 22.5 to 23.5 inches; slightly less for females. 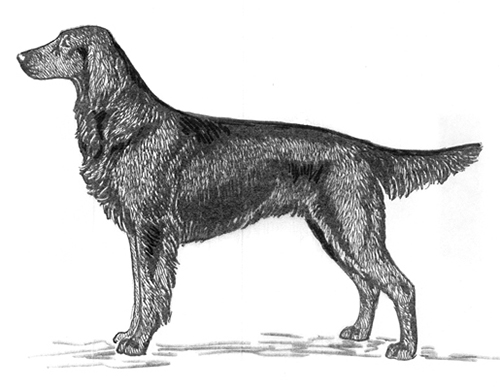