The Entlebucher was recognized by the United Kennel Club on January 1, 1993.

The Entlebucher is a medium-sized, compactly built dog of slightly elongated shape. The ratio of height, measured at the withers, to length of body is 8:10. The Entlebucher strongly muscled, agile, balanced, with ample bone, and is always tri-colored with a black ground coat and rich rust/tan and clear white markings.

The Entlebucher is harmoniously built and very agile; with an alert, attentive and friendly expression, and pleasant personality. They are excellent herding and watch dogs. Thorough socialization is required through puppyhood. They may be reserved with strangers, but do not exhibit shyness.

The clean, slightly wedge-shaped head is in proportion to the body. The planes of the skull and muzzle are more or less parallel. The ratio of the length of muzzle to length of skull is 9:10.

The skull is flat, and broadest between the set-on of the ears. The stop is well defined, but not exaggerated. The muzzle is straight, strong, and well formed. There is a clear division of the forehead and cheeks into the muzzle. The lips are clean, close-fitting, and have black pigmentation. It is preferred that the whiskers are to be left natural, and not trimmed.

A full complement of strong, white teeth meet in a scissors bite, which is preferred. An even bite is tolerated.

The rather small, dark brown to hazel eyes have a lively expression. Eye rims are black.

The nose pigment is always black.

The medium size, triangular-shaped ears are rounded at the tips. They are set on high and hang down flat and close to the head, forming a nearly level plane with the topskull. They are carried slightly raised when the dog is alert, which is typical of all pasture dogs.

The medium length, strong, smooth neck is well set into the shoulders.

The forequarters are strongly-muscled, but not too heavy. The long, well-muscled shoulders are well laid back. They are never loose.

The forelegs are short, straight, strong, and parallel. They are placed well under the body Dewclaws may be removed from the forelegs, but it is not mandatory. The short pasterns are slightly angulated.

The sturdy topline is level, with a slight slope over the relatively long croup. The chest is broad, deep and capacious, reaching to the elbows, with well sprung ribs. The loin is strong and flexible.

There is a slight tuck-up.

The hind legs are straight and strong. The upper thigh is fairly long, broad and strong. The clean lower thigh is approximately equal in length to the upper thigh. The stifles are well-angulated. The strong hocks are well let down, and turn neither in nor out. The rear pasterns are straight when viewed from behind. Dewclaws may be removed from the hind legs, but it is not mandatory.

The feet point straight forward; are slightly round and compact. The toes are arched; and the nails are strong and can be any combination of black or white. The pads are firm and strong.

The Entlebucher is born with anything from a natural length to a natural bob tail, both of which are acceptable.

The natural tail set-on is a continuation of the gently-sloping croup. In motion, it may be elevated, but is never carried over the back.

The breed is double-coated. The short, hard, close fitting outer coat has a bright, natural sheen. A wavy or soft outer coat is tolerated, but not preferred. The undercoat is dense, and of varying color.

Faults: Too long or too soft hair.
Disqualification: Absence of undercoat.

The Entlebucher is tri-colored, with a jet black ground color and rich rust/tan and clear white markings. Symmetry of markings is desired.

White markings include: a small, distinct blaze that runs from the top of the head over the bridge of the nose, and can wholly or partially cover the muzzle; and white from the chin to the chest without interruption. The white marking on the chest typically forms an inverted cross, which is desirable. In a full-length tail, the tip is usually white. White on the feet is desired, but must not extend higher than the pasterns.

The following are undesirable but tolerated: a small white patch of no more than two inches on the nape of the neck; high white markings on the legs.

Color and markings are not to take precedence over overall soundness, balance and temperament.

Height, measured at the withers, ranges from 17 to 21 inches for males, and from 16 to 20 inches for bitches. Quality is not to be sacrificed in favor of size.

The ideal gait is free and ground-covering, with fluid movement. There is good reach in the forequarters. There is a powerful drive from the hindquarters. As speed increases, the dog will tend to single-track. A level back is maintained during movement.

(A dog with a Disqualification must not be considered for placement in a conformation event, and must be reported to UKC.)
Unilateral or bilateral cryptorchid.
Viciousness or extreme shyness.
Any color other than black.
Albinism.
Blue eyes.
Entropianism.
Ectropianisnm.
Absence of undercoat.
Overshot.
Undershot.
Wry mouth. 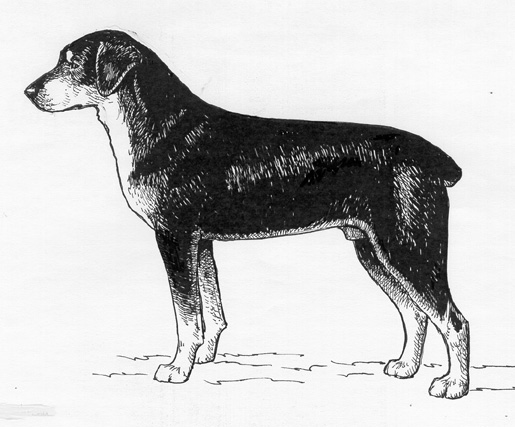