The English Coonhound was first registered by UKC in 1905, under the name of English Fox & Coonhound. In those days the dogs were used much more on fox than they are today. The name also reflected the similarity that the breed had to the American Foxhound and the English Foxhound.
The variation in color is another aspect of English Coonhound history. Both the Treeing Walker and the Bluetick Coonhound were originally registered with UKC as English. The Walker was recognized as a separate breed in 1945, and the Bluetick a year later. There are still tri-colored and blueticked English hounds, though redticked dogs dominate in the breed today.

The first mention of hounds in America appears in the diary of one of the men who was with the explorer DeSoto. He also mentions that the hounds were used for the hunting of Indians rather than fox, raccoon or rabbit.

In 1650, Englishman Robert Brooke brought his pack of hounds to America with him. Thomas Walker of Virginia imported hounds from England in 1742, and in 1770 George Washington, an avid fox hunter, had hounds imported from England. These dogs were the foundation of the “Virginia Hounds”, from which the present day English Coonhound was developed.

The Americans adapted the animals to the much rougher American terrain and climate, and, through careful breeding practices, adapted the hounds to American game: raccoon, opossum, cougar and various species of bear.

English hounds have excelled in both performance and conformation. The first major coonhound Field Trial of all time, the first Leafy Oak, was won by an English dog called “Bones”, owned by Colonel Leon Robinson.

The English Coonhound is a dog of strong build, capable of considerable speed and great endurance. He is balanced, graceful and free from exaggeration.

Pleasant and sociable, with strong hunting instincts. Voice is a good hound bawl.

The head is broad between the ears, and of good overall length. Skull very slightly domed. Muzzle is long, deep and square, with enough flew to give the jaw a squared off appearance. Stop is well defined but moderate.

Set fairly low on skull, fine in texture and soft to the touch. Fairly long, reaching nearly to the nose when pulled forward.

Nicely muscled, of moderate length, tapering slightly as it rises up out of the withers.

Forelegs set well apart, and are straight and strong, with good bone. Pasterns nearly vertical, but with enough slope to absorb shock. Length of leg from elbow to ground is approximately one-half the height at the withers. Sloping shoulders are clean yet strongly muscled.

Chest is deep, reaching to elbow, and broad. Ribs are well-sprung. Back is straight and strong, never roached. Topline is slightly higher at withers than at hips. Loin is strongly muscled and slightly arched. Underline curves gracefully upward to a moderate tuck up at the flank. Overall proportion (measured from point of shoulder to point of buttocks and withers to ground) is square, or slightly longer than tall.

Hips and thighs are strongly muscled, showing drive and power. Stifles are stout and have good angulation. Hock joint has moderate angulation. Rear pasterns are strong and straight when viewed from behind. Dewclaws removed.

Moderately set and gaily carried, but never hooked over the back. Medium length, with a small amount of brush acceptable. Never overly long and thin.

Disqualifications: Any brindle in coat. Albinism. Any color or combination of colors other than described.

Height at withers for adult males, 22 to 27 inches. For adult females, 21 to 25 inches. Weight should be in proportion to height, keeping in mind the strong build of the English Coonhound.

(A dog with a Disqualification must not be considered for placement in a bench show/conformation event, and must be reported to UKC.)
Any brindle in coat.
Undershot or overshot.
Unilateral or bilateral cryptorchid.
Viciousness or extreme shyness.
Albinism.
Any color or combination of colors other than described.
Deaf.
Blind. 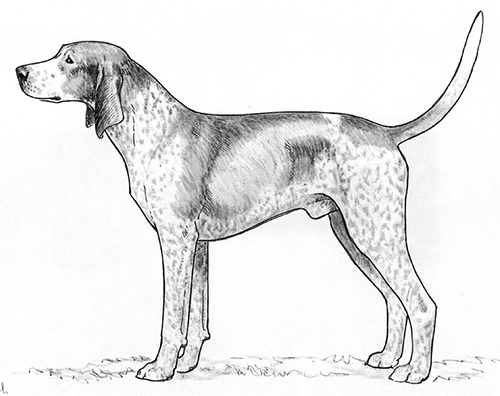