Cobby, compact and essentially square in shape, the English Toy Spaniel is sturdy of frame and solidly constructed, with a silky, flowing coat. Its moderately rounded head, lustrous dark eyes and well-cushioned, fairly short-nosed face exemplify the important characteristics of the English Toy Spaniel.
Absolute soundness and proper muscle tone is a must. Head properties should remain free of exaggeration so as to not compromise breathing and/or obstruct normal vision.

The breed has a soft and appealing expression, indicating an intelligent nature and a merry and affectionate demeanor. They are bright and interested, affectionate and willing to please.

The head is relatively large in comparison to the overall size of the dog. It has a plush, chubby look, yet with a degree of refinement that prevents coarseness.

The skull is moderately large in comparison to the size of the dog. It appears high, domed, without being excessively so, and full over the eyes. The deep stop is well defined.

The muzzle is fairly short in comparison to the overall size of the head The nose is well laid back. Cushioning under the eyes is well developed. The square, broad, deep jaw is well turned up. The lips meet properly to give a finished appearance. Length of muzzle should be adequate for comfortable breathing.

A full complement of strong, white teeth meet in a slightly undershot bite. The teeth are not to show.

The eyes are set squarely on a line with the nose. They are very dark brown or black, with little or no white showing. Eye rims are black.

The nose has large, wide-open nostrils. It is jet black in color and turned up to meet the skull.

The very long ears are set low and close to the head. They are fringed with heavy feathering.

The nicely-arched neck is moderate in length, allowing for a proud head carriage.

The strong, well-boned legs drop straight down from the elbow. The pasterns are strong.

The short, square, cobby body is deep and compact, with a sturdy frame. The chest is deep and broad and the topline is level.

Strong and properly muscled to give driving movement.

The hind legs are well muscled and nicely angulated at the stifle and hock joints. The rear pasterns are short and straight when viewed from behind, turning neither in nor out.

Neat and compact. Fused toes, which are often seen, are acceptable.

The tail and its carriage serve as an index of the breed's attitude and character. The tail is set at back level and is carried at or just slightly above the level of the back. Docking is optional. If docked, it is 2 to 4 inches in length and well feathered with a silky flag. If undocked, the tail is well feathered and not carried over or much above the level of the back.

The coat is long and silky, straight or slightly wavy, never curly. There is profuse feathering on the ears, legs and tail. The feet are well feathered.
The Blenheim and Ruby rarely attain the length of coat and ears of the Prince Charles and King Charles, but good coats and long ear fringes are desired and prized attributes.
Over trimming of the body, feet and tail fringes is to be penalized.

The weight range for adults is from 8 to 14 pounds.

Free, lively, elegant. Good reach in front; sound driving action from the rear. Indicative of stable character and correct structure. Good length of stride when viewed from the side. Straight and true when viewed from both front and rear. 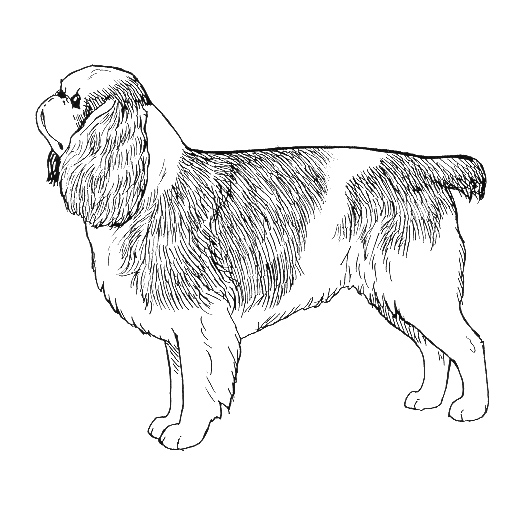