According to legend, the English Shepherd is a combination of native dogs of the British Isles and the Roman sheep and cattle dog brought to the British Isles by Caesar when he invaded in 55 B.C.
Romans used these dogs to herd the livestock brought along to feed the troops. As the livestock was depleted, surplus dogs were left along the way, and were used by local natives and interbred with existing types of dogs with similar herding talents to intensify those instincts.

The English Shepherd was brought to the American colonies by some of the first settlers and followed the development of the United States from east to west. This multi-purpose breed was highly prized as it was used to herd valuable livestock and to protect the isolated homesteads.

The United Kennel Club is the original registrar of the English Shepherd and has recognized them since 1927.

A medium-sized dog of sturdy balance and harmonious proportions, built for speed and maneuverability. The English Shepherd's alert face shows intelligence. Being a "total" breed, English Shepherds should be judged both on their ability to work livestock and their physical and structural appearance. To be taken into primary consideration are type, balance, soundness, gait and temperament.

Energetic, intelligent, very active, agile, courageous and gritty. Fearless for their purpose. Acting immediately when commanded, and very responsive to the master's voice. Adapting themselves almost at once to working commands around farm stock. Working characteristics include: strictly low heeling, and very free with the use of their teeth. Also very watchful as guards of the home. Companionable to their master.

The head is of medium length and slightly rounded between the ears. The head and neck are carried slightly raised.

The skull is wide and flat above the eyes, broad between the ears. The width of the skull between the inner corners of the ears is approximately the same distance as the width behind the eyes. There is a medium amount of stop, moderately defined.

The muzzle is moderately broad, but is neither wide and stubby nor thin and snipey. The flews are straight and do not droop. The jaws are deep and powerful. The length of the muzzle, from the tip of the nose to the stop, is about equal to the distance from the stop to the occiput.

Wide at the base. Folding over approximately ¾ down and laying close to head.

Dark or medium brown. Moderately round with a slightly oblique set. Express character with a strong, intelligent look.

Neck is well muscled, arched, and of medium length, setting well into the shoulders.

The shoulders are well laid back; shoulder blade and upper arm are about equal length.

Straight and muscular with medium bone and strong but flexible pasterns. Not too short.

The body length, from the point of the shoulder to the point of the buttock, is about the same as the height at the withers. The chest is deep, extending down approximately to the elbows, and wide, allowing large lung capacity. The topline is level. The ribs are well sprung. The loins are strong and deep. The flank is not tucked up.

Faults: Roached or sway back.

Wide and muscular. Very compact at the hip, denoting the strength to spring.

Compact and round with arched toes and deep pads. Dewclaws may be removed.

Moderately long with the tip of the bone reaching to the hock joint. Carried slightly higher than the back, with a slight curve. When the dog is standing or at rest the tail should not be held straight up or over the back.

Natural bobtails are acceptable. They should be about six to eight inches long and carried level with the back line.

Fault: A tail that is held straight up and over the back when the dog is at rest.

The coat is thick, glossy, and soft. It may be straight, wavy or curly, except on the face, skull and front of legs where it is short and smooth. The coat fully covers the body from ears down to feet. There is good furnishing under the body and on the upper half of the hind legs. The back of the front legs are feathered. The tail is plume like. The undercoat is soft and fine, affording protection from the elements. Any evidence of excessive grooming is to be penalized.

Faults: Kinky coats. Heavy manes or heavy frills on the underside of the neck and on the chest.

There are five predominant color patterns: Black and White; Black and Tan; Black, White and Tan; Sable and White, and Tan & White. The Black and White has a well-defined black coat with white trim. White trim may include: a white neck ring, a blaze of white on foreface and/or topskull, as well as those areas defined below for tan trim. However, the white blaze should not extend back so far as to meet the white neck ring.

The Black and Tan has a well defined black coat with tan trim, which appears on the cheeks as "shepherd spots," over the eyes, as a broad chest bar, on the front legs as stockings up to just above the knees, inside the hind legs, on the feet, under the tail and inside the ears. A Black and Tan may have white on the chest. If any white appears in the trim areas, the dog is not a Black and Tan, but is defined as a Black, Tan and White (tri-color).

The Black, Tan and White (tri-color) has a well defined black coat with some white replacing the tan trim. There must be, however, tan "shepherd spots" over the eyes.

The Sable and White has a well-defined, sable-colored coat with white trim.

Tan & White has a well defined tan coat, which can range from shades of Fawn to Red, with white trim.

The gait is smooth, without choppiness, indicating the ability to change direction instantaneously. Action should be effortless, with no body roll.

Viewed from the front, the forefeet track close together, but do not cross over. Viewed from the rear, the hind legs follow in a line with the forelegs, converging toward a center line of gravity.

(A dog with a Disqualification must not be considered for placement in a conformation show, and must be reported to UKC.)
Unilateral or bilateral cryptorchid.
Viciousness or extreme shyness.
Albinism.
Excessive white covering more than one-third of dog.
Solid white coats.
Whites with black or sable spots.
Blue merles.
Solid red or red merle. Solid black coat. 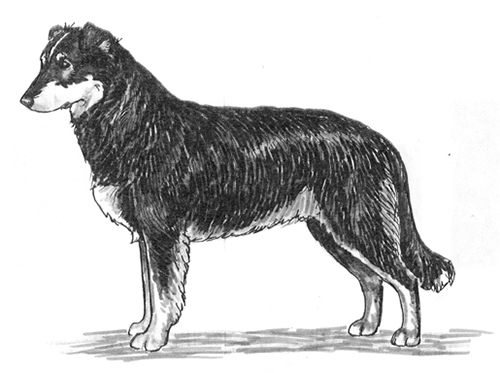