The Pointer’s history is an old one, traceable in writing and in works of art back to the middle of the 17th Century. While the English Pointer was developed primarily in England, most canine historians credit Spain as the country of origin. The English Pointer resulted from crosses between these Spanish pointers and various breeds, most probably Foxhounds and Bloodhounds for scenting, Greyhounds for speed, and Bull Terriers for tenacity. Even before the advent of wing shooting with guns, the English Pointer was used to point game, which the hunters then netted or chased with coursing hounds. Pointer breed type, temperament, and hunting ability stabilized around the end of the 18th Century and have changed very little since then. Today the English Pointer is widely regarded as one of the finest upland bird dogs in the world.

The English Pointer was recognized by United Kennel Club in the early 1900’s.

The English Pointer is a medium-sized, well-balanced dog with a long, chiseled head; a distinctive “dish” face; small drop ears; and a short, tapered “bee sting” tail carried no higher than 20 degrees above the topline. The length of body is roughly equal to the height at the withers. The distance from the withers to the elbow is roughly equal to the distance from the elbow to the ground. The overall picture is that of an elegant, hard-driving, intelligent hunter, with stamina and dash. The English Pointer should be evaluated as a working gun dog, and exaggerations or faults should be penalized in proportion to how much they interfere with the dog’s ability to work.

The four most distinctive features of the English Pointer are its long, chiseled head, the short “bee sting” tail, strong hunting instincts, and effortless, hard-driving movement. The Pointer can be somewhat aloof with strangers but is an excellent family companion, eager to please and particularly good with children.

The head of the English Pointer is the hallmark of this breed. Although the classic “dish face” has become a staple of dog art, the features of the head are as functional as they are beautiful. Viewed from the side, the length of skull and muzzle are approximately equal in length, and joined by a pronounced stop. The topline of the muzzle may be higher at the nose than at the stop or it may be parallel to the topline of the skull. All other things being equal, the dish face is slightly preferred. There is a slight median furrow between the eyes at the forehead and the occipital bone is not conspicuous.

The skull is long and about half as wide as it is long. The cheeks are flat and well chiseled.

The muzzle must be sufficiently long to allow the dog to carry birds as large as pheasants and grouse. In profile, the muzzle is rectangular. The bridge of the muzzle may rise slightly from stop to nose or be level. Viewed from above, the muzzle is moderately wide with very little taper from stop to nose. Lips are slightly pendent but not overly thick, with pigment to match the nose. The top lip should fall naturally over the lower without folds or drooping, giving a squared appearance to the muzzle when viewed from the side.

The English Pointer has a complete set of evenly spaced, white teeth meeting in a scissors or level bite.

The nose leather may be black or self-colored, depending on coat color. Nostrils must be large and open.

The eyes are oval with tight eyelids and pigment to match the nose color. Dogs with black pigment have dark eyes, the darker the better. Lighter-colored eyes are acceptable in dogs with self-colored pigment, but liver-colored dogs should preferably have darker eyes than lemon-colored dogs. The bony arches over the eyes are defined but should not be so excessive as to make the skull appear coarse.

Expression is alert and intelligent.

The English Pointer’s ear is another distinguishing mark of the breed. The ears are drop, short in length (reaching just below the lower jaw when hanging naturally) and set on just above eye level. They should be slightly pointed. The ear leather is thin enough that the veins in the ear are apparent. The outer side of the ear is covered with short, silky hair. At rest, the ears should hang nearly flat and close to the cheeks, with little or no fold.

The neck is long, slightly arched, and muscular. The circumference of the neck widens from the nape to where the neck blends smoothly into well-laid-back shoulders. The skin is tight.

The shoulders are smoothly muscled. The shoulder blades are long and well laid back. The upper arm is roughly equal in length to the shoulder blade and joins it at an apparent right angle. The elbows are close to the body. The forelegs are straight, strong and sturdy, with bone that is oval in shape and proportionate to the overall substance of the dog. Pasterns are slightly finer in bone but strong, short, and slightly sloping.

A properly proportioned English Pointer is roughly square in shape. The length of the front legs (measured from point of elbow to the ground) is slightly longer than the deepest part of the body.

The topline is mostly level, never exaggerated or overly sloped, with only a slight rise from the croup to the withers. The back is short, strong, and straight. The loin is strong, of moderate length, and slightly arched. The croup is slightly sloping. The ribs extend well back and are well sprung out from the spine, then curving down and inward. The forechest extends in a shallow oval shape in front of the forelegs. The chest is deep, reaching to the elbows, and of moderate width. Tuck-up is apparent but not exaggerated.

Faults: Steeply sloping topline; croup too flat or too steep; tuck-up too exaggerated or absence of tuck-up; excessive skin or “skirting” in the tuck-up; short rib cage with long loin.

Good feet are essential for a working gun dog. Feet are compact, well knit, and oval in shape. Toes are long and well arched. Pads are thick and hard. Nails are strong. Front dewclaws may be removed.

A correct tail is an essential element of English Pointer breed type. The tail is short, reaching no longer than the top of the hock and preferably somewhat shorter. The tail is straight, thicker at the base, and tapering to a point. The tail is set on as a natural extension of the topline and should not be carried more than 20 degrees above the topline. When the dog is trotting, the tail moves rhythmically from side to side.

The coat is short, dense, close fitting, with a sheen.

Faults: Coat too thick and coarse or too thin and sleek; feathering; brushy tail.

Any of the following three coat colors, solid or in combination with white: black, liver, and any shade of yellow. Tri-color is also acceptable but is a hound trait and should be faulted accordingly. Dogs with yellow or yellow and white coats that have black noses and eye rims are traditionally referred to as “orange colored.” Yellow or yellow and white dogs with liver noses and eye rims are referred to as “lemon colored.”

Desirable height at maturity for males is 25-27 inches and for females, 23-25 inches.

Desirable weight for a male in working condition is between 55 and 75 pounds, and between 44 and 65 pounds for a female.

Balance and symmetry are more important than size, but great variations in size are undesirable.

When trotting, the gait is effortless, smooth, powerful and well coordinated, showing good but not exaggerated reach in front and powerful drive behind. The head is carried high and the tail moves from side to side in rhythm with the dog’s gait. The topline remains level with only a slight flexing to indicate suppleness. Viewed from any position, legs turn neither in nor out, nor do feet cross or interfere with each other. As speed increases, feet tend to converge toward center line of balance. Poor movement should be penalized to the degree to which it reduces the English Pointer’s ability to perform the tasks it was bred to do.

(A dog with a Disqualification must not be considered for placement in a conformation event, and must be reported to UKC.)
Unilateral or bilateral cryptorchid.
Viciousness or extreme shyness.
Docked tail.
Albinism. 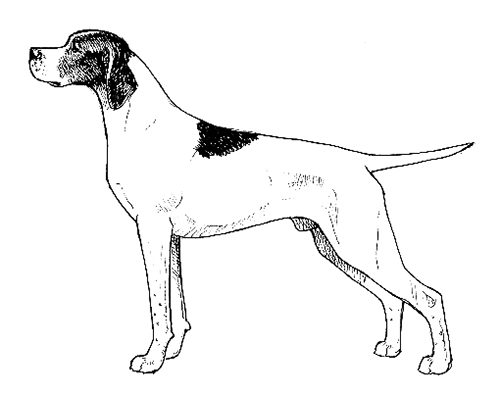