The English Cocker Spaniel was developed from the field spaniels, a subcategory of the "land" spaniels developed to work the field (as opposed to the "water" spaniels that worked over water). Land spaniels were divided into "springing" and "field" spaniels. These were smaller spaniels, which worked the hedgerows and gorse of rural England to flush the woodcock for the hunters.

The English Cocker Spaniel was recognized by the United Kennel Club in 1914.

The English Cocker Spaniel is solidly-built, short-coupled and moderately angulated. It has as much bone and substance as possible without being cloddy or coarse. The height, measured at the withers, is slightly greater than the distance measured from the withers to the set-on of the tail.

The English Cocker Spaniel is merry, affectionate and even-tempered. They are easily-trained, are willing workers and excellent companions. They exhibit enthusiasm in the field, accompanied by an incessant action of the tail. Dogs exhibiting sluggish or hyper-active temperaments are to be faulted.

They exhibit balance, both in motion and while standing. The head is especially characteristic of the breed, having a brainy appearance indicating high intelligence. The muzzle is also distinctive.

The head appears strong and free from coarseness, and softly contoured, without sharp angles. As a whole, the parts that make up the head combine to produce the distinctive expression of the breed, that being soft and melting, yet dignified, alert and intelligent.

When viewed from either the front or the side, the skull is arched and slightly flattened. When viewed in profile, the brow appears to be not appreciably higher than the backskull. When viewed from above, the sides of the skull maintain the approximate planes of the muzzle. The length of the muzzle is equal to the length of the skull, but is narrower, as is consistent with a full eye placement. The head is in proportion to the body, and the muzzle is in proportion to to the head. The skull is cleanly chiseled under the eyes. The stop is not moderate, but is defined and slightly grooved. The jaws are strong, indicative that the dog is capable of carrying game.

The eyes are essential to the overall characteristics of the head. The full, slightly oval-shaped eyes are of medium size and set well apart. The eyelids are tight. The haws are inconspicuous; may be pigmented or not pigmented. The eye color is dark brown, except in livers and liver parti-colors, where they are hazel, the darker hazel being preferred.

The nostrils are wide, indicative of room for the proper development of olfactory nerve to ensure good scenting ability. Acceptable colors include: black; and brown in liver and liver parti-colored dogs. Red and red parti-colors may have brown noses, but black is preferred.

The ear leather is fine and extends to the nose. The ears are covered with long, silky, straight or slightly wavy hair. They are set low and lie close to the head.

Faults: Ears set or carried too high. Too wide at the top. Insufficient feathering.

The neck is graceful and muscular. It arches toward the head and blends cleanly into sloping shoulders. It is moderate in length and is in balance with the length and height of the dog.

The shoulders are sloping, with the blades flat and smoothly fitting. The shoulder blade and upper arm are approximately equal in length.

The forelegs are straight, with bone that is nearly uniform in size from the elbow to the heel. The elbows are set close to the body. The upper arm is set well back and joins the shoulder with sufficient angulation so that the elbow is placed beneath the highest point of the shoulder blade when the dog is in a natural stance. The pasterns are nearly straight, with some flexibility.

The compact, well-knit body gives the impression of strength without heaviness. The neckline blends into the shoulder and backline in a smooth curve. The topline slopes very slightly toward the gently rounded croup. The back is short and strong. The short, broad loin is very slightly arched, not enough to significantly affect the topline. The croup is gently rounded, without the tendency to fall away sharply.

The chest is deep, but not so wide as to interfere with foreleg action nor so narrow as to cause the front to appear narrow or pinched. The brisket reaches to the elbow, sloping gradually to a moderate tuck-up. The forechest is well developed, the prosternum projecting moderately beyond the point of the shoulder.

The well-sprung ribs spring gradually to mid-body tapering to the back ribs, which are of good depth and extend well back.

Serious Faults: Sway back. Roach back.

The angulation of the hindquarters is in balance with that of the forequarters. The hips are relatively broad and well rounded.

The feet are proportionate in size to the legs. They are firm, round and catlike. The toes are arched and tight. The pads are thick.

Faults: Feet too large or too small. Splayed feet.

The tail may be docked or natural, and is set on to conform to the croup. While the dog is in motion, the tail is carried horizontally, an extension of the croup, and is in constant motion. When the dog is excited, the tail may be carried somewhat higher, but not gaily. Faults: Tail set too low. Carried habitually too high.

The coat is short and fine on the head, and of medium length on the body, where it may be flat or slightly wavy and is silky in texture, with enough undercoat to provide protection. It is well feathered but not so much as to interfere with field work. Trimming is permitted only to remove overabundant hair. The dog should always appear as natural as possible.

Faults: Coat too soft, wiry or curly. Lack of coat.

Various colors, which include black, liver and shades of red, are acceptable.

Parti-colors may be clearly marked, ticked or roaned. The white appears in combination with the black, liver or shades of red (roaned). It is preferable that, on the body, the solid markings are broken and more or less evenly distributed. The absence of body markings is acceptable.

Solid-colored (also known as self-colored) dogs (black, liver or shades of red) may have a little white on the throat, but white feet are undesirable. These white markings do not make the dog a parti-color.

Clearly defined, richly shaded tan markings may appear on solid colored or parti-colored dogs. Tan markings are found over the eyes, on the sides of the muzzle, on the throat, on the chest, on the forelegs from the knees to the toes, on the hind legs, on the inside of the legs and on the stifle extending from the hock to the toes. Black and Tans and Liver and Tans are considered Solid Colors.

Serious Faults: Any deviations from the height.

The English Cocker Spaniel’s gait is characterized by drive and the appearance of power, rather than speed, indicative of the breed’s use as a hunter in dense cover and upland terrain. Correct angulation enables the dog to cover the ground effortlessly with extension in the front and rear. The head is carried proudly while in motion. The topline remains much the same whether in motion or standing still. They move in a straight line with width between the front and rear legs that is appropriate to build and gait. 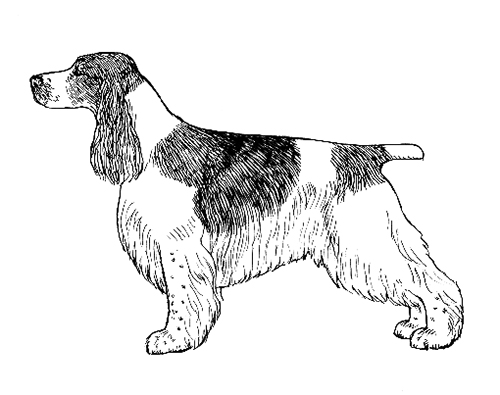