The East Siberian Laika is descended from the Spitz-like Aboriginal dogs that were most likely brought to the areas of the Baikal Lake region, Irkutsk Province, Evenki National Territory, Amur River basin and the Maritime Territory by tribes that were migrating from the west. Early Laikas in the east of Siberia were diverse in their size, head proportions, size of ears and shape and carriage of tail. Some of this diversity is still seen in the breed today. The East Siberian Laika is the largest of the Russian Laika breeds used for hunting. It is also used as an all purpose draft, sledge and drover dog.

The East Siberian Laika was recognized by the United Kennel Club January 1, 1996.

The East Siberian Laika is a large, strong dog, nearly square in proportion, with a typical Spitz type head and a medium length, double coat of varying colors.

A natural hunting dog, the East Siberian Laika has a strong instinct to hunt both large and small game. The breed is territorial and prone to be aggressive to any dog of the same sex that invades its property. They are not normally aggressive towards people, but can be good watchdogs.

The head is wedge shaped.

The skull is broad, with a well-defined occipital protuberance. The stop is gradual, not abrupt.

The muzzle is nearly as long as the skull. In profile, it is wedge shaped, with tight, dry lips. The top line of the muzzle lies in a plane parallel to the top of the skull.

The East Siberian Laika has a complete set of evenly spaced, white teeth meeting in a scissors bite.

Black, except in white or pale yellow dogs, where a brown nose is permitted.

Oval in shape, not large, dark in color, and set obliquely.

Nearly as long as the head, and muscular.

The forequarters are well angulated.

Straight and parallel, with slightly inclined pasterns. Length of the leg from ground to elbow is slightly more than half the height at the withers.

Straight and parallel, with good angulation at the stifle and hock joints. Rear pasterns vertical.

The feet are nearly round. Dewclaws may be apparent.

The tail is either sickle or ring shaped. The sickle tail is carried erect or curved toward the loins. The ring tail lies on the croup or buttocks. The tail is nearly long enough to reach to the hock.

The medium length coat is double, with a coarse, dense, straight outer coat, and a soft, dense undercoat. The coat forms a collar on the neck and shoulders and a mane in males over the withers. The skin is thick, without folds.

Pepper and salt, white, grey, black, red, and brown in all shades; patches, ticked; ticking in the corresponding color is permitted on the limbs.

The typical gait is a gallop, alternating with a trot. 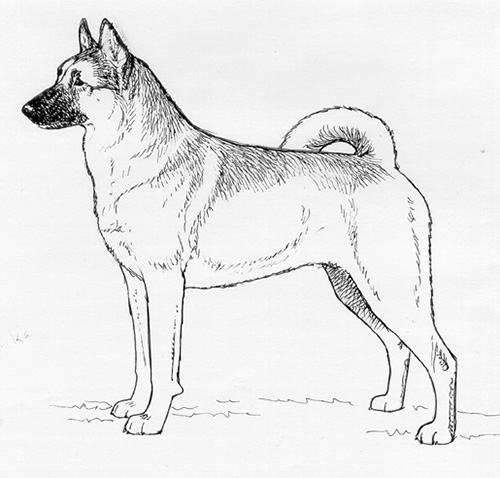