The Dunker originated in Norway.

The Dunker was recognized by the United Kennel Club January 1, 1996.

The head is clean and noble. It is long, with parallel planes of the skull and muzzle. It is not wedge shaped. The head is to be carried fairly low.

Slightly domed, with a prominent occiput. The stop is defined, but not steep or abrupt. The cheeks are clean.

The muzzle is rather long and square cut. The nasal bridge is straight and broad.

The Dunker has a complete set of evenly spaced, white teeth meeting in a scissors bite.

The nose is black, with wide nostrils.

Rather large and round, but not protruding, the eyes are dark in color.

The ears are set rather low. They are wide and flat, hanging close to the head. They should reach to the middle of the muzzle when pulled forward.

Rather long, with no throatiness.

The shoulder blades are muscular, long and sloping, meeting closely at the tips. They are well angulated with the upper arms.

The legs are straight, strong and sinewy. The distance from the elbow to the ground is one half the height at the withers. The pasterns are slightly sloping.

The chest is capacious, and the ribs are well sprung. The back ribs especially should be well developed and long. The topline is level and the back is straight, firm and not too long. The loin is broad and muscular but not arched. The croup is slightly sloping. There is a slight tuck up.

The thighs are broad, and the stifle is well angulated. The hocks are dry, broad and low set.

Arched and well knit, with firm pads. They should be well covered with hair between the toes. The feet should point straight ahead.

Set on level with the topline, the tail is strong at the root and tapers towards the end. It should be straight and be carried in a slight upward curve. At rest the tail should reach to the hock.

Straight, hard, dense and not too short.

Black or blue marbled (dappled), with pale fawn and white markings. Warm brown or predominant black reaching from the muzzle and beyond the hock joint with so-called black mask is less desirable. Over-marked white where the white colour reaches out on the shoulders, on the underside of the belly and on legs (socks) is accepted as correct marking.

Disqualification: Body color that is more than 50% white.

Free and ground covering, parallel from behind. Never crouched or cow hocked.

(A dog with a Disqualification must not be considered for placement in a conformation event, and must be reported to UKC.)
Unilateral or bilateral cryptorchid.
Viciousness or extreme shyness.
Albinism.
Body color that is more than 50% white. 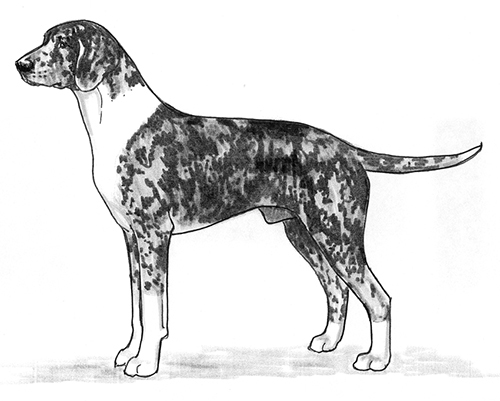