Small sized German hounds were imported to Sweden in 1910. These dogs gained a reputation as very good deer trackers. In 1947, the larger variety of these dogs was given the name Drever, and it was soon recognized as a Swedish breed. They are considered the first choice breed for deer tracking but are also used for hunting hare and fox.

The Drever was recognized by the United Kennel Club January 1, 1996.

A robust, strong, rather short legged, rectangular breed, the Drever carries itself proudly, and has well developed muscles and an agile appearance. Secondary sex characteristics are strongly defined.

Keen and even tempered.

Rather large in proportion to the body, the head tapers in width towards the nose.

The skull is only slightly arched. There is little stop.

The muzzle is strong, and is the same length as the skull. The bridge of the nose is straight or slightly convex. The lips are tight and close fitting.

The Drever has a complete set of evenly spaced, white teeth meeting in a scissors or level bite.

Bright and full of expression, dark brown in color. The rims are tight fitting.

Set fairly low, medium long and broad, hanging close to the cheeks without folds. They are rounded at the tips.

Powerful, and fairly long. No dewlap.

The shoulders are long, broad, muscular and sloping. The upper arm is proportionally long and slopes backward to set the front legs under the body.

The legs are straight, with strong bone. The pasterns are slightly sloping and springy.

Serious Faults: Crooked legs. Feet turning in or out.

The chest is oval in shape, well developed, and reaches below the elbow. The distance from the sternum to the ground is 40% of the total height at the withers. The prosternum is prominent. The ribs are well developed and reach far back. The withers are well defined in males. The topline is level. The loin is strong, arched and rather short. The croup is long, broad and slightly sloping. There is a slight tuck up behind the long sternum.

Serious Faults: Too low on leg. Sway back or roach back.

The thighs are broad and muscular. The stifles and hocks are well angulated. The rear pasterns are short and vertical.

Firm, with well knit toes and strong pads. The feet point straight ahead.

Long, and thick at the base, the tail is preferred carried down but may be carried higher as long as it does not rise over the back.

Harsh, straight and close lying. On the neck, back and buttocks, the hair is longer. There is a brush on the underside of the tail.

All colors with white markings are acceptable. Colors should be well defined, and markings symmetrical.

Even, parallel and long reaching, with the topline remaining level.

(An Eliminating Fault is a Fault serious enough that it eliminates the dog from obtaining any awards in a conformation event.)
Height over or under the stated size in the standard.

(A dog with a Disqualification must not be considered for placement in a conformation event, and must be reported to UKC.)
Unilateral or bilateral cryptorchid.
Viciousness or extreme shyness.
Albinism.
Pronounced overshot or undershot.
Blue eyes.
Kinked or deformed tail.
Solid white or solid liver brown. 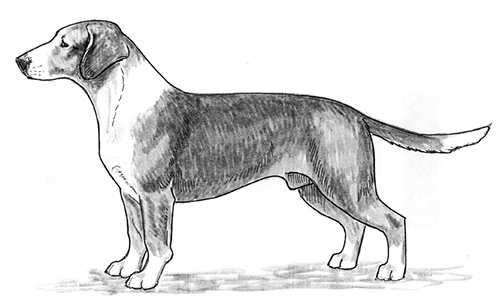