The Drentsche Patrijshond originated in the Netherlands in the 16th Century, and were bred down from the Spioenen dogs that came through France from Spain. In the Netherlands they were called Partridge dogs. The breed is related to the Small Munsterlander and the Epagneul Francais.

The Drentsche Patrijshond was recognized by the United Kennel Club January 1, 1996.

This is a gentle, loyal and intelligent breed that makes a wonderful family pet and a great hunting companion. It is adaptable to all sorts of game on land and in the water, and is a good retriever and finder of lost game.

The skull is rather broad and only slightly rounded. There is a barely perceptible furrow up the median line from the shallow stop to the moderately developed occiput.

The muzzle is wedge shaped and slightly shorter than the skull, blunt at the end, and not cut away under the eyes. The nasal bridge is broad and straight. The lips are rather thin and tight fitting.

The Drentsche Patrijshond has a complete set of evenly spaced, white teeth meeting in a scissors bite.

Well developed, with wide open nostrils. It is brown in color.

The eyes are of moderate size, oval in shape, and set wide apart. The desired color is amber. The rims are close fitting. The expression is kindly and intelligent.

Set on high and hanging close to the head, the ears are broad at the base and taper to a blunted point. Drawn forward, the ears should reach about two inches from the end of the nose. The ears are mobile, and at attention they are drawn forward and pulled up to form a triangle. The outside of the ear is covered with abundant, wavy hair. The hair is shorter at the tip of the ears.

Powerful and rather short than long. No dewlap.

The shoulder blade and upper arm are long and sloping, forming a good angle.

The forearms are straight and well muscled, and the elbows are close to the body. The wrist is strong and the pasterns are slightly sloping.

Slightly longer than tall in proportion, with the medium length back and well angulated front and rear quarters giving the impression of being elongated. The chest is deep and rather broad. The ribcage is long and well sprung through to the back ribs. The loin is strongly muscled, and the croup is broad, long and slightly sloping. There is a slight tuck up.

Serious Fault: A narrow chest that does not reach to the elbows.

Seen from behind, the legs stand absolutely vertical. There is good angulation at the stifle. The hock joint is well let down.

Round or oval, with tight, arched toes and solid pads.

The tail is set rather high, and is long enough to reach to the hock. It is carried horizontally, with a slight upward curve at the end. It is never carried over the back. The tail is richly feathered, diminishing towards the end.

The coat is dense, but not really long. There is longer hair on some parts of the body. On the neck and forechest, the hair is longer, and on the ears there is long, preferably wavy, hair. There is feathering on the back of the legs and on the tail.

White with brown markings, with or without ticking. Roan dogs or dogs with a solid mantle are acceptable but less desirable. The ears are brown and there are brown markings around the eyes.
Disqualification: Albinism.

Height at the withers for males is 23 to 25 inches. For females, it is 21.5 to 23.5 inches. Slightly larger is acceptable as long as the dog is well proportioned.

Well extended and balanced, with good reach and drive, and a tendency to single track. 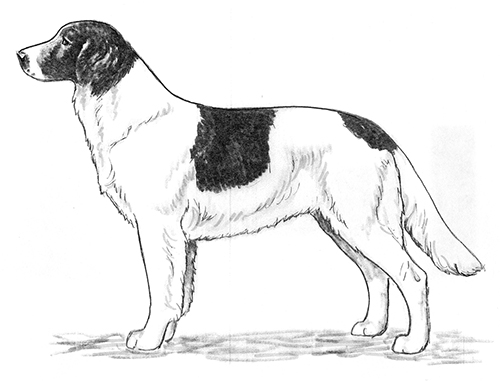