The Dogue de Bordeaux is one of the oldest French breeds. Its actual origins are obscure but it is probably descended from one of the strains of Mastiff-type dogs that accompanied Macedonian and Roman armies through Asia, Europe, and Britain. A 14th century writer describing the Alaunt Veutreres, a probable ancestor of the Dogue de Bordeaux, wrote that this dog “holds his bite stronger than three sight hounds.” By the middle of the 19th century, the Dogue de Bordeaux was little known outside of Aquitaine where it was used to hunt large animals, such as boar; to fight; to guard homes and cattle; and in the service of butchers. The Dogue de Bordeaux was entered under its present name in the first dog show held in France in 1863. The breed narrowly missed extinction during the two world wars but enjoyed a resurgence in the 1960’s. Sometime in the early 1980’s, the first Dogue de Bordeaux was imported to the United States. The breed is used today almost exclusively as a family companion and house guardian.

The Dogue de Bordeaux is a well-balanced, massive, powerfully-built dog with a very muscular body and a short coat. The Dogue is somewhat low in stature with a huge head, furrowed by wrinkles, topped with small, pendant ears. The tail is thick at the base and tapering to the tip and is set and carried low. The breed is presented in a completely natural condition and should be evaluated equally for correct conformation, temperament, gait, and structural soundness.

The massive head of the Dogue de Bordeaux is an essential breed characteristic. In males, the circumference of the skull taken at the widest point is roughly equal to the dog’s height at the withers. In females, the circumference may be slightly less. Viewed from the front and from above, the head forms a trapezoid. The longer topline of the skull and the shorter line of the underjaw form the parallel sides of the trapezoid.

The skull is large, slightly domed, and broad between the ears. The volume and shape of the skull result from the very important development of the temporal bones, the supraorbital ridges, the zygomatic arches, and the spacing of the mandibles. There is a deep median furrow that diminishes in depth from the stop to the occiput. The stop is very deep and abrupt, almost at a right angle with the muzzle. Despite the depth of the stop, the forehead is wider than it is high.

The Dogue de Bordeaux has a complete set of large, evenly spaced, white teeth. The incisors are well-aligned, particularly the lower incisors which form an apparently straight line. An undershot bite is characteristic of the breed with the inside of the lower incisors extending in front of the upper incisors at least .2 inch and no more than three-quarters inch. Teeth are not visible when the mouth is closed.

Nose color is black on black-masked dogs; brown on brown-masked dogs; or reddish pink on unmasked dogs. The nose is broad and well-pigmented with well-opened nostrils. An upturned nose is permissible but the tip of the nose must not be set back deeply between the eyes like an English Bulldog.

The eyes are large but not protruding, oval, and set well apart - at least twice the length of the eye opening. Color ranges from hazel to dark brown. Lighter eye colors are acceptable but not preferred in dogs without a mask or dogs with red masks. Haw is not visible. Pigment of eye rims matches nose pigment.

The ears are pendant and relatively small. They are set high, level with the upper line of the skull, accentuating the skull’s width. At the base, the ear is just slightly raised in front and then hangs along the cheek. The tip is slightly rounded. When pulled toward the eye, the ear should not extend past the inside corner of the eye. The coat on the ears is slightly darker than the body coat.

The neck is thick, muscular, and almost cylindrical with very little taper from the shoulder to the head. The neck is slightly arched at the crest and blends smoothly into well-laid-back shoulders. There is a slight transverse furrow separating the neck from the head. The average circumference of the neck is almost equal to the circumference of the skull. The well-defined dewlap starts at the level of the throat and forms folds down to the chest.

The shoulders are powerful and heavily muscled. The shoulder blade is well laid back and forms, with the upper arm, an angle just slightly greater than 90 degrees. The forelegs are heavily boned and very muscular. The elbows are set on a plane parallel to the body, neither close to the body nor turned out. Viewed from the front, the forelegs are perpendicular to the ground or may, especially in a dog with a very broad chest, incline slightly inward. The pasterns are short, powerful, and slightly sloping when viewed in profile. Viewed from the front, the pasterns are either straight or may turn slightly outward in compensation where the foreleg inclines inward around a wide chest.

The chest is deep and broad. The ribs are well sprung from the spine and then flatten to form a deep body extending below the elbows. The topline inclines very slightly downward from well-developed withers to a broad, muscular back. The short, broad loin blends into a moderately sloping croup. The flank is somewhat tucked up and firm.

The hindquarters are powerful but slightly less broad than the forequarters. The angulation of the hindquarters is in balance with the angulation of the forequarters. The thighs are well-developed with thick, easily discerned muscles. Stifles may turn slightly outward and hocks may turn slightly inward. The lower thighs are muscular and short. Rear pasterns are sinewy and well let down with the angle of the hock moderately open. Viewed from behind, the rear pasterns are parallel.

Feet are large, oval, strong, and tight, with hind feet slightly longer than front feet. Pads are well developed, with strong nails, preferably pigmented. Despite its weight, the Dogue de Bordeaux is well up on its toes. Dewclaws are not removed.

The coat is short, fine and soft to the touch.

Solid color in any shade of fawn, ranging from mahogany to isabella. Color on the ears is somewhat darker than the body coat. Limited white patches are permissible on the chest and feet. Good pigmentation is preferred. Dogs may or may not be masked as follows:

Black mask. There may be slight black shading on the ears, neck, top of the body, and on the skull, except that the mask may not extend past the supraorbital ridges to the topskull. Black-masked dogs have black nose pigment.

Faults: White on tip of tail or on the front part of the legs above the pasterns.
Disqualifications: White on the head or body. Albinism.

Desirable height at maturity, measured at the withers, ranges from 23½ to 26½ inches for males and 22½ to 25½ inches for females. Dogs in good condition should weight at least 110 pounds and bitches at least 99. All other things being equal, the larger dog should be given preference over the smaller.

The gait of the Dogue de Bordeaux is free, smooth, and powerful. When viewed from the side, reach and drive indicate maximum use of the dog’s moderate angulation. As the gait quickens, the head tends to drop and the feet tend to converge toward the center line of balance but do not cross over. The Dogue de Bordeaux is capable of great speed over short distances.

(A dog with a Disqualification must not be considered for placement in a conformation event, and must be reported to UKC.)
Unilateral or bilateral cryptorchid.
Viciousness, marked shyness or cowardliness.
Long, narrow head with insufficiently pronounced stop.
Muzzle longer than one-third head length.
Muzzle parallel to top line of the skull or downfaced.
Wry mouth.
Mouth not undershot.
Canines always visible when mouth is closed.
Tongue always protruding when mouth is closed.
Kink or screw tail.
Atrophied tail.
White on the head or body.
Any coat color other than fawn.
Albinism.
Any identifiable disabling defect. 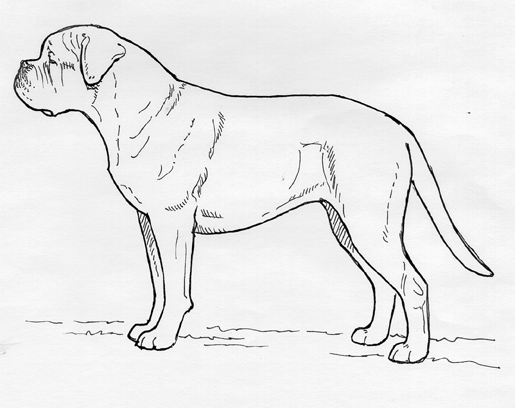