In 1928, Dr. Antonio Nores Martinez, a young Argentine physician, began to develop a new breed of dog, which he called the Dogo Argentino. Using a methodical system, Dr. Martinez crossed a local breed, known as the Old Fighting Dog of Cordoba, with a variety of breeds, including Mastiffs, Bulldogs and Bull Terriers. His new breed demonstrated a talent for hunting big game, including wild boars and pumas, as well as strong guarding instincts. The breed was recognized by the Federacion Cinologica Argentina in 1964, and by the FCI in July 1973.

Today, the Dogo Argentino is still used as a hunting dog, a guardian of property, a family companion, and an all-around working dog.

The Dogo Argentino was recognized by the United Kennel Club on January 1, 2001.
General Appearance

The Dogo Argentino is a large, white, short-coated dog with a smooth, muscular body, displaying both power and athletic ability. The length of body is just slightly longer than tall, but bitches may be somewhat longer in body than dogs. The length of the front leg (measured from point of elbow to the ground) is approximately equal to one-half of the dog’s height at the withers. The head is powerful with a broad, slightly domed skull and a powerful muzzle that is slightly higher at the nose than the stop, when viewed in profile. Ears may be cropped, or hang naturally, close to the skull. The Dogo Argentino should be evaluated as a hunting dog, and exaggerations or faults should be penalized in proportion to how much they interfere with the dog’s ability to work.

The Dogo is an intelligent and courageous dog with a strong, natural instinct to protect its home and family. Dogos are very social dogs and are happiest when included in all family activities. Dogos make a strong distinction between familiar people and strangers, so it is imperative that they be well trained and socialized at an early age.

Dogos are hunters of great courage and endurance, and will work individually or in packs. They have also successfully been used in police protection work. An unsteady temperament is a serious fault.

The head is large, but proportionate to the size of the body, and broad, giving the impression of great power and strength, without abrupt angles or distinct chiseling. Viewed from the front, the head is shaped like a square within a square. Viewed from above, the head is broad through the skull, narrowing slightly where muzzle joins the skull, and then tapering only slightly to the blunt end of the muzzle. When viewed from the side, the length of skull and muzzle are approximately equal, and they are joined by a distinct, but not abrupt, stop. The planes of the skull and muzzle are not parallel. The skull is slightly domed and the bridge of the muzzle rises slightly from the stop to the nose.

The skull is broad and slightly domed, with a median furrow that diminishes in depth and width from the stop to the occiput. Cheeks are well developed, relatively flat, and powerful. The supraorbital arches over the eyes are moderately well defined. The occiput is not prominent.

Disqualification: Lips that hang below the line of the lower jaw.

The Dogo Argentino has a complete set of large, evenly spaced, white teeth that meet in a scissors bite. An even bite is acceptable but not preferred. Large teeth and proper occlusion are of extreme importance.

Nose is large and black, with well-developed nostrils. Some pink pigment on the nose is acceptable, provided the nose is predominantly black.

Eyes are of medium size, almond shaped, and set well apart and deep in their sockets. Eye color may range from very dark brown to dark hazel, but darker eye color is strongly preferred. Eye rims are tight and preferably black in color, although lack of pigmentation is not a fault. Expression is alive, intelligent and hard.

Serious Faults: Functional abnormality of eyelids or eyelashes.
Disqualifications: Eyes any color other than listed above; eyes not of matching colors.

Ears are set on high on the outside edges of the topskull, and may be cropped or natural. Cropped ears should be triangular in shape, short, and erect. Natural ears are drop, broad at the base, short in length (reaching just to the corner of the lower jaw when hanging naturally) and tapering to a rounded tip. Ear leather is thick. At rest, the ears should hang nearly flat and close to the cheeks, with little or no fold. The ears may be semi-erect when the dog is alert. The outside of the ear is covered with smooth hair that is slightly shorter than the body coat. Ear color may range from heavily spotted to solid black or brindle.

The neck is of medium length and muscular, with a slight arch at the crest, and tapering slightly from shoulders to the head. The skin on the throat is thick and elastic, and may form slight, smooth, non-pendent folds.

The shoulder blades are long, wide, muscular, and well laid back. The upper arm is roughly equal in length to the shoulder blade and joins it at an apparent right angle, lying flat against the chest wall.

The forelegs are well boned, strong and muscular. The elbows are set close to the body. Viewed from the front, the forelegs are set moderately wide apart and perpendicular to the ground. The pasterns are short, powerful, straight, and flexible. When viewed in profile, the bone of the pasterns is slightly flattened.

The chest is deep, well filled in and wide with ample room for heart and lungs. The forechest does not extend much beyond the point of shoulder. The ribs extend well back and are well sprung from the spine, then flattening to form a deep body extending to or below the elbows. The back is strong and firm. The topline falls off slightly behind the withers and blends smoothly into the loin. The loin is short and broad with a muscular arch, and it blends smoothly into a gently sloping croup. The flank is moderately tucked up and firm.

The hindquarters are broad, strong and muscular, normally angulated to balance with the front assembly.

Set well apart and parallel to one another when viewed from behind. Hocks are strong and turn neither in nor out. Rear pasterns are short.

The feet are round and tight, with well arched toes. Pads are thick, black, and rough in texture. Nails are short, strong and white. Rear feet are slightly smaller and broader than front feet. Dewclaws may be removed.

Short and thick, with a glossy sheen. Hair is stiff, coarse and of uniform length. A field conditioned coat or working scars should never be faulted.

White. Skin pigmentation that shows through the coat is not to be penalized in mature dogs. One dark marking on the head is permitted provided that it does not cover more than 10% of the head. No other markings are allowed with the exception of some light ticking, which is not to be confused with a solid patch. All other things being equal, the whiter dog is preferred.

Disqualification: A solid patch of color anywhere except on the head as described, not to be confused with ticking.

Height for mature males should range between 24½ and 27 inches. Height for mature females should range between 23½ and 25½ inches. A mature Dogo under the minimum height for its sex is disqualified. Dogos are not a giant breed so a mature Dogo over the maximum heights should be severely penalized, because the additional height detracts from its ability to work.

Dogos should always be presented in hard, working condition. Weight should be sufficient so that the dog presents a harmonious blending of sturdiness and substance with agility and athleticism.

The Dogo Argentino moves with power and agility, able to change gait quickly and smoothly when in the field. When trotting, the gait is effortless, smooth, powerful, and well coordinated, showing good reach in front and drive behind. When moving, the topline remains level with only a slight flexing to indicate suppleness. Viewed from any position, legs turn neither in nor out, nor do feet cross or interfere with each other. As speed increases, feet tend to converge toward a center line of balance. At a walk, the Dogo moves like a lion; with power, dignity and the supreme confidence that he is king of all he surveys.

Poor movement should be penalized to the degree to which it reduces the Dogo’s ability to perform the tasks it was bred to do.

(An Eliminating Fault is a Fault serious enough that it eliminates the dog from obtaining any awards in a conformation event.)
Males under 24½ inches. Females under 23½ inches.

(A dog with a Disqualification must not be considered for placement in a conformation event, and must be reported to UKC.)
Unilateral or bilateral cryptorchid.
Viciousness or extreme shyness.
Albinism.
Lips that hang below the line of the lower jaw.
Flesh colored, or predominantly flesh colored, nose.
Overshot or undershot bite.
Eyes of any color other than listed.
Eyes not of matching colors.
Unilateral or bilateral deafness.
Long coat.
A solid patch of color anywhere except on the head as described, not to be confused with ticking. 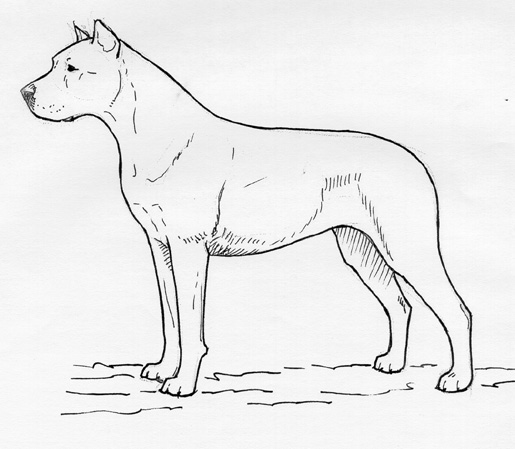