In the 1880s a group of German hunters decided to recreate the Stober, a versatile breed mentioned as far back in German history as 1719. The Stober was known to have the scent following ability similar to that of a bloodhound. The Germans obtained remnants of that breed found in Bavaria and bred them with other sporting spaniels that had a proven passion for hunting. They produced the Wachtelhund (pronounced Valk-tel-hund and means “quail dog”) and the breed was officially recognized in 1903. The German Wachtelhund club is called the Verein fur Deutsche Wachtelhund (VDW). In Germany, only gamekeepers and hunters own this breed. They are not sold to the non-hunting public. Several Wachtelhunds were brought to United States in the late 1960s and early 1970s, but were only bred once or twice, producing a total of 17 dogs. Several Canadian guides and hunting outfitters have owned Wachtelhunds for the past twenty years and used them as flushers, retrievers and to track and hold wounded black bear at bay. In 1994 another pair of Wachtelhunds were brought to the United States. Today there are approximately 100 dogs in the U.S. and Canada.

The Deutscher Wachtelhund was recognized by the United Kennel Club in 1996.

The Deutscher Wachtelhund is a strong boned, muscular, medium sized gundog with long thick wavy hair. It is solidly-built which allows it to retrieve heavy game such as hares and foxes. The ears are fairly long and should reach to the tip of the nose. The size is approximately 18 to 21 inches. Body length, nose to base of tail is twice the height. It is slightly larger than the Springer Spaniel.

The Wachtelhund has a vibrant, affectionate and friendly personality and is a willing worker and excellent companion. The Wachtelhund is easily trained to hunt all types of game and is an obsessive scent follower with bloodhound-like persistence. The Germans bred it to do many hunting tasks including finding game, retrieving and recovering game, and blood trailing wounded deer, red stag (elk), and boar. The Wachtelhund is used to hunt waterfowl and upland game and all fur and cloven hoof game from hare, fox, and wild boar. This versatile breed can follow air scents when game is far away, hunting with a high nose like a Pointer, and can follow ground scents like a hound when game is closer. Unlike a hound, however, a Wachtelhund can be called off a trail and will return to its master. This breed naturally hunts in an arc pattern before the hunter, bringing the game back before the hunter. While aggressive in the hunt, the Wachtelhund is a loyal and great family dog. Wachtelhunds prefer to hunt alone and will hold a wounded boar or bear at bay, if necessary. They do best living in the home.

The head appears strong and free from coarseness, and softly contoured, without sharp angles. As a whole, the parts that make up the head combine to produce the distinctive expression of the breed, that being soft and melting, yet dignified, alert and intelligent.

Serious fault: A prominent stop at the eye junction between muzzle and head.

When viewed from either the front or the side, the skull is arched and slightly flattened at the top. When viewed in profile, the brow appears to be not appreciably higher than the backskull without a prominent stop at the eye junction between muzzle and head. When viewed from above, the sides of the skull maintain the approximate planes of the muzzle.

Fault: Loose drooling lips that do not close.

A full complement of strong, white teeth which meet in a scissors bite.

The nostrils are wide, large and flexible, indicative of room for the proper development of olfactory nerve to ensure good scenting ability. Color is brown.

The eyes are essential to the overall characteristics of the head. The full, slightly oval-shaped eyes are of medium size and set well apart. The eyelids are tight. The haws are inconspicuous; may be pigmented or not pigmented. The eye color is brown to hazel.

The ears are high and wide, flat and lie close to the head, without outward turns. The ear leather is fine and ranges in length from half way between the eye and nose to the nose. The ears are covered with long, silky, straight or slightly wavy hair. The hair makes the ear appear large than it is.

The neck is graceful and muscular. It arches toward the head and blends cleanly into sloping shoulders. It is moderate in length and is in balance with the length and height of the dog.

The shoulders are sloping, with the blades flat and smoothly fitting. The shoulder blade and upper arm are approximately equal in length and form an angle of about 90 degrees. The forelegs are strong and straight, with bone that is nearly uniform in size from the elbow to the heel. The elbows are set close to the body. The upper arm is set well back and joins the shoulder with sufficient angulation so that the elbow is placed beneath the highest point of the shoulder blade when the dog is in a natural stance. The pasterns are nearly straight, with some flexibility. From the front view, the legs and feet must be vertical and straight to the ground. From the side view, the pasterns should be slightly angled forward. Bones at the foot and lower leg must have clean joints without protruding bones. Legs should have good feathering from the elbow to the foot.

The compact, well-knit body gives the impression of strength. The neckline blends into the shoulder and backline in a smooth curve. The topline slopes very slightly toward the gently rounded croup. The middle back is short and strong, without swayback. The loin is short, wide and deep with slightly bulging muscles to give strength to the hind legs. The loin is very slightly arched, not enough to significantly affect the topline. The croup is gently rounded, without the tendency to fall away sharply.

The chest is deep and oval in appearance from the front view. From the side view, the brisket reaches below the elbow. The forechest is well developed and muscular. The ribs are well sprung and rounded, extending gradually to mid-body tapering to the back ribs, which are of good depth and extend well back. Stomach is flat and level extending from the end of the rib cage to the pelvic area.

The angulation of the hindquarters is in balance with that of the forequarters. The hips are relatively broad and well rounded. The muscular upper thigh is broad and well rounded, providing adequate propelling power. The muscular lower thigh is broad and thick, approximately equal in length to the upper thigh. The stifle is strong and well bent. From the back view, the legs are parallel and straight to the ground, not bowed. The hindquarters have long thick feathering.

The feet are proportionate in size to the legs. They are strong and oval shaped. The toes are arched and tight with thick hair between the toes. The pads are round, thick and course.

Faults: Feet too large or too small. Splayed feet.

The tail is set high on the croup and normally docked to between 1/5th and 1/3rd of its length. While the dog is in motion, the tail is carried horizontally, an extension of the croup, and is in constant motion. When the dog is excited or working game, the tail may be carried higher, and wags rapidly. The tail has good feathering.

The coat is short and fine on the head, and longer on the body, where it is strong, thick, wavy or curly, with enough undercoat to provide protection. It is well feathered.

The Deutscher Wachtelhund may be solid brown and brown schimmel (brown ticked with white or roaned).

Brown Wachtelhunds include shades of orange, blond, red, and dark brown; however, brown is the predominant color.

Brownschimmel Wachtelhunds shades from red to dark brown. The following patterns are acceptable:

Brown with white ticking or roaning; White, with or without ticking with brown patches; small brown and white patches called “leopard”.

Serious Faults: Any Wachtelhund under 16½ inches.

The Deutscher Wachtelhund's gait is characterized by drive and the appearance of power, rather than speed, indicative of the breed's use as a hunter in dense cover and upland terrain. Correct angulation enables the dog to cover the ground effortlessly with extension in the front and rear. The head is carried proudly while in motion. The topline remains much the same whether in motion or standing still. They move in a straight line with width between the front and rear appropriate to build and gait.

(A dog with a Disqualification must not be considered for placement in a conformation event, and must be reported to UKC.)
Unilateral or bilateral cryptorchid.
Viciousness or extreme shyness.
Albinism.
Black hair color. 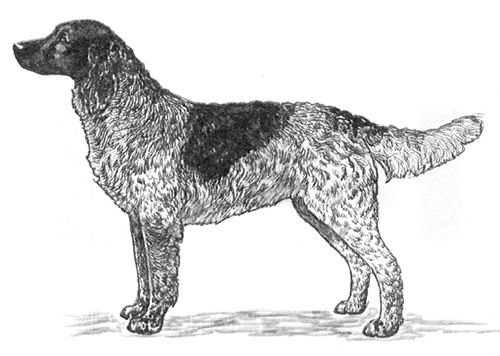