Though this breed was not recognized under its current name until 1987, the breed has been known for centuries on farms in Denmark and Sweden. It has been used as a watchdog, ratter and companion. The Farmdog is more closely related to the Pinschers than it is to the Terriers. The breed’s FCI classification is Pinscher and Schnauzer, Molossoid breeds-Swiss Mountain and Cattle Dogs.

The Danish-Swedish Farmdog was recognized by the United Kennel Club in 2008.

A small, compact, smooth coated breed that is slightly rectangular in shape, the Danish-Swedish Farmdog is a breed known to mature quite late.

The head is triangular in shape and slightly small in proportion to the size of the body.

The skull is fairly broad between the ears. It is only slightly rounded. The cheeks are well filled and slightly pronounced, without exaggeration. The stop is well marked.

The muzzle is well developed and slightly shorter than the skull. It narrows gradually from the eyes to the nose but must never give a snipy appearance. The nasal bone is straight.

The Danish-Swedish Farmdog has a powerful jaw with well developed incisors and a scissors or level bite.

The eyes are medium in size and slightly rounded in shape, being neither protruding nor sunken. The color should be as dark as possible, though in dogs that have yellow or liver patches a somewhat lighter eye is acceptable. The expression is attentive and kind.

The ears are medium in size, either rose or button, and very mobile. In both, the fold should be just above the line of the skull.

In button ears the tip should lie close to the cheek.

The neck is clean, strong, slightly arched and medium in length.

The forequarters are broad and well-developed. They are proportionally broader than the ribcage. The shoulder blades and upper arms are obliquely placed and form a good angle.

The legs are straight and parallel to one another. They are set rather wide apart due to the development of the chest. The length of the legs from elbow to ground is one-half the height at the withers. The pasterns are strong and springy.

The body is compact, with good substance. In proportion, it is slightly longer than tall in a ratio of 10:9. The chest is long, deep and roomy. The ribs are very well sprung. The forechest is well-defined. The loin is short, broad and slightly arched, and the croup is slightly rounded. Belly is only slightly tucked up.

The hindquarters are parallel and well muscled.

The upper thighs are broad. There is good angulation at the stifle and hock joints.

The feet are small and oval. The toes are not tightly knit.

The tail is not set too high. The tail may be naturally long or naturally bobbed. It should be carried straight, with a slight curve or in a sickle shape.

Faults: Curled tail, or tail carried flat on the back.

The coat is short, smooth and harsh on the body.

White is the predominating color. There are broken patches of different colors such as black, tan, brown and shades of fawn that are allowable in different sizes and combinations. There may be tan points. Ticking or flecking is acceptable. 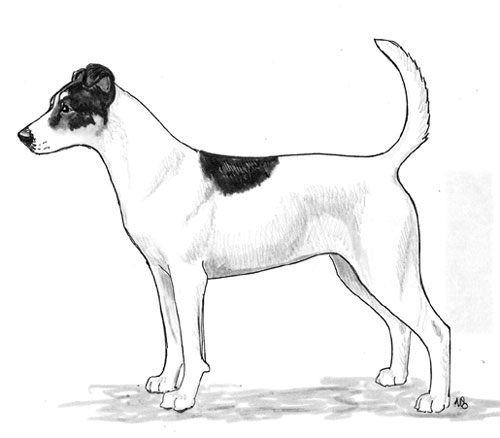