The Broholmer has been in existence since the Middle Ages, when it was used to hunt stag. Later, the breed was used mainly as a guardian for farms and large manors. After the Second World War, the breed was nearly lost, but due to the dedication of a group of fanciers who organized in 1975 as the Society for Reconstruction of the Broholmer Breed, its numbers are increasing.

The Danish Broholmer was recognized by the United Kennel Club in 2006.

The Broholmer is a mastiff type dog of large size and imposing build. It has a massive head and extremely powerful forequarters.

The Broholmer is good tempered. The breed is friendly and calm, but ever watchful. It is important that this breed shows great self confidence.

The head is large and broad, giving a heavy appearance.

The muzzle is massive, and the same length as the skull, though it looks shorter due to the general heaviness of the head. The lips are pendulous, but not excessively so. The jaws are very powerful.

The Broholmer has a complete set of evenly spaced, white teeth meeting in a scissors or level bite.

Disqualification: Nose other than black.

The eyes are round, and not too large. They range in color from light to dark amber. The expression shows great self confidence.

Medium sized, set rather high and carried hanging close to the cheeks.

Very powerful and muscular, with some throatiness.

The length and angulation of the bones of the shoulder assembly should produce free movement, with good length of stride, whether the dog is walking or trotting. The upper arms are very powerful and muscular.

Straight and strong, with elbows held close to the body and pasterns that are not too long.

In proportion, the Broholmer is slightly rectangular. The chest is deep and powerful, with a well-developed forechest. The withers are clearly defined. The back is rather long, and the topline is straight. The croup is slightly sloping.

The angulation of the hindquarter should match that of the forequarter to produce good drive and length of stride.

Seen from behind, the legs are straight and parallel. The upper thighs are very muscular. The rear pastern is not too long.

Set on rather low, thick at the base, and free of feathering. When the dog is in motion, the tail is raised to a horizontal position, preferably not higher, and never carried curled over the back.

Disqualification: Tail curled over the back.

Acceptable colors are yellow with a black mask; golden red; black. White markings on the chest, feet and tip of tail are optional.

Disqualification: Any color other than those listed.

Composed, with good reach and drive. At slow speeds, the head is held rather low. When the dog is attentive, the head is carried higher and the tail raises to horizontal.

(A dog with a Disqualification must not be considered for placement in a conformation event, and must be reported to UKC.)
Unilateral or bilateral cryptorchid.
Viciousness or extreme shyness.
Albinism.
Overshot or undershot bite.
Nose other than black.
Eyes of two different colors.
Erect ears.
Tail curled over the back.
Distinctly long coat.
Any color other than those listed. 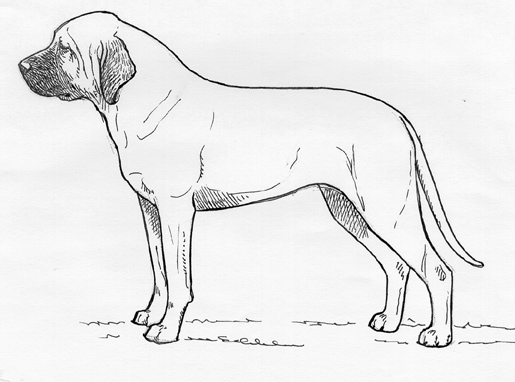