The Dandie Dinmont Terrier is descended from the rough native terriers that were kept in the border country between England and Scotland. They were first recorded as a distinct type around 1700, and were used to hunt otter and badger. Sir Walter Scott discovered them during his travels and made the breed famous in his book Guy Mannering published in 1814. In the book, a character named Dandie Dinmont kept six of these terriers, and since the time of the book, the breed has been known by this name.

The Dandie Dinmont Terrier was recognized by the United Kennel Club in 1918.

The Dandie Dinmont is a breed with distinctive physical characteristics. He is long and low, has a large head and a weaselly body, heavily boned legs and a weatherproof coat.

The Dandie is an intelligent, affectionate and dignified companion, yet is very game and workmanlike, and has great persistence and determination.

The strongly made head is large, but not out of proportion to the dog's size. The muscles of the head show extraordinary development, especially in the upper jaw (maxillary). Head is covered with soft, silky hair.

broad between the ears, gradually tapering toward the eyes, and approximately the same width as length. The forehead is well domed.

approximately three inches in length, deep and strongly made. The proportion to the skull being as 3 is to 5. The muzzle is generally bare for about an inch from the back part of the nose. The bareness comes to a point toward the eye; is about one inch wide at the nose.

A full complement of very strong, evenly-spaced, white teeth meet in a tight scissors bite. The canines are of an extraordinary size for a dog of this size. The canines mesh well to provide the greatest available holding and punishing power.

The large, full, round eyes are set wide apart, low, and look straight forward. They are a rich, dark hazel in color and have a wise, intelligent expression.

The pendulous ears are set well back, wide apart and low on the skull; hanging close to the cheek. Ear length is from three to four inches. They are broad at the top, tapering nearly to a point. The leather is thin.

Shoulders are well laid back and not coarse.

The short forelegs are set well apart. They have immense muscular development and heavy bone. Forefeet point straight ahead or slightly out when standing.

Chest is well developed and well let down between the forelegs. Ribs are round and well sprung. Body is long, flexible and gently curves from rather low shoulders, to an arch over the loin, then gently drops from the top of the loin to the root of the tail.

The hind legs are slightly longer than the forelegs. They are set wide apart, but not spread in an unnatural manner. The thighs are well developed. Stifles are well bent and rear pasterns are short. Dewclaws are removed from the hind feet.

Round and well padded, the front feet are considerably larger than the hind feet. Nail color varies according to body color. White nails are acceptable.

The tail is eight to ten inches in length, and set as a natural continuation of the gradual drop off the loin. It is thick at the base, then even thicker for about four inches, before tapering off to a point. It is curved like a scimitar, with the tip carried on a perpendicular line with the base, or somewhat more gaily when the dog is excited.

The double coat of the Dandie Dinmont is an important breed characteristic. Body coat is crisp to the touch, a combination of hard outer hair and soft undercoat. It is not wiry. It appears to pencil down the back due to the combination.

The entire head is covered with very soft, silky hair. The ear has a thin feather of light hair, of nearly the same color and texture as the hair on the head, starting about two inches from the tip; giving the ear the appearance of a distinct point. The dog is often one or two years of age before the ear feather is shown.

The upper side of the tail is covered with wiry hair of a darker color than that of the body. The underside of the tail is light in color and not so wiry, with nice feathers about two inches long that get shorter nearer to the tip.

The acceptable colors are Pepper or Mustard. Pepper ranges from a dark bluish-black to a light silvery gray, with the intermediate shades being preferred. The body color comes well down the shoulders and hips and gradually merges into the leg color, which varies from rich tan to pale fawn. Profuse silvery white topknot.

Mustard varies from a reddish brown to a pale fawn. The head is a creamy white and the legs and feet are a shade darker than the head.

Some white on chest acceptable, but white feet are undesirable.

Ear color is in harmony with the body color. In a Pepper dog, the ears are covered with soft, straight, dark hair, in some cases nearly black. In a Mustard dog, the ears are mustard in color; a shade darker than the body, but not black.

Strong and straight with a free, easy stride. There is good propulsion from the hindquarters.

(A dog with a Disqualification must not be considered for placement in a conformation event, and must be reported to UKC.)
Unilateral or bilateral cryptorchid. Extreme viciousness or shyness. Albinism. 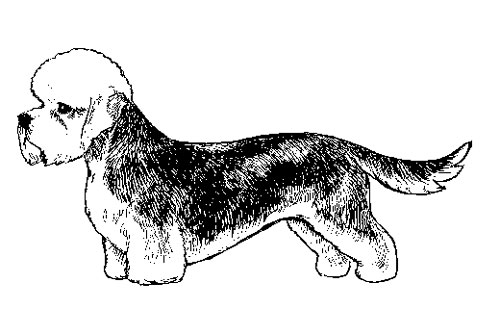