The Czechoslovakian Vlcak was recognized by the United Kennel Club in July 1, 2006.

Firm type in constitution, above average size with a rectangular frame. In body shape, movement, coat texture and color of coat and mask it is similar to the wolf.

Fearless and courageous, suspicious of strangers but very loyal to his master. Useful for a variety of tasks and possessing the capability of great endurance.

Symmetrical and well muscled, shaped like a blunt wedge. The sex of the dog should be readily apparent when viewing the head.

Slightly arched with a clearly visible occiput and no marked frontal furrow. There is a moderate stop. The length of the muzzle is longer than the length of the skull in a ratio of 1:1.5.

The muzzle is clean and not broad. The nasal bridge is straight. The lips are tight fitting and have black rims. The cheeks are clean and sufficiently muscled, but not protruding.

The Czechoslovakian Vlcak has a complete set of evenly spaced, white teeth meeting in a scissors or level bite. The absence of two premolars (P1) or two third molars (M3) is not a fault. However, these teeth missing in combination (such as two P1 and 1 M3) should be considered as a fault.

Disqualifications: Any missing teeth other than the P1 and M3 as stated above. Any bite irregularity.

Oval in shape and black in color.

Small, slanting, and amber in color with tight fitting rims.

Short, triangular in shape, fully erect, with thin leather. Set with the outside edge in a direct line with the outer corner of the eye. A vertical line from the tip of the ear would run close alongside the head.

Faults: Thick ears. Ears set too high or too low.

Long, dry, and well muscled. In repose, the neck forms an angle of up to 40 degrees to the horizontal.

Straight, strong and clean, with tightly held elbows and feet that turn out slightly. The pasterns are long and flexible, forming an angle of at least 75 degrees with the ground. The length of the leg from elbow to ground is slightly more than half the height at the withers.

Longer than tall in a ratio of 10:9. The neck flows smoothly into the withers, which are pronounced but must not interfere with the smooth transition of the entire topline, which slopes slightly. The chest is pear shaped, narrowing towards the sternum, and does not reach to the elbows. There is no prominence of forechest in front of the point of the shoulder. The back is firm and straight, and the loin is short and well muscled, but not broad. The croup is short, not broad and slightly sloping. The underline is tucked up and slightly hollow in the flank.

Powerful, with angulation of approximately 80 degrees between the pelvis and femur.

The hind legs stand parallel. They are long and well muscled, with flexible joints. A vertical line drawn from the point of the ischium would run mid way through the hock joint. Angulation at the hock joint is approximately 130 degrees. The rear pastern is long and almost perpendicular to the ground. Rear dewclaws must be removed.

Set on high and normally hanging straight down. When the dog is excited, it is raised in a sickle shape.
Faults: Tail set on low, too long or not carried correctly.

The coat is straight and close. It must cover the entire body including belly, insides of thighs, scrotum and the inner parts of the ears. The coat is very affected by climate, and the winter and summer coats vary greatly. In winter there is a tremendous undercoat that predominates. The skin is elastic and tight without wrinkles or pigment.

Disqualifications: Stand off or untypical coat.

Yellowish-gray to silver-gray, with a light mask and lighter shading on the underside of the neck and the chest. Dark gray with a lighter mask is also acceptable.

Fault: A barely pronounced mask.
Disqualification: Any color other than listed in the standard.

Height at the withers for males is at least 25½ inches, for females, at least 23½ inches. Males weigh at least 57 pounds, females at least 44 pounds.

Harmonious, light footed and ground covering with the feet kept very close to the ground. The head and neck are carried forward, not vertically. At slow speeds, pacing is typical.

Any departure from the foregoing points should be considered a fault and the seriousness with which the fault should be regarded should be in exact proportion to its degree.

(A dog with a Disqualification must not be considered for placement in a conformation event, and must be reported to UKC.)
Unilateral or bilateral cryptorchid.
Viciousness or extreme shyness.
Albinism.
Any missing teeth other than the P1 and M3 as stated in the teeth section.
Any bite irregularity.
Dewlap.
Stand off or untypical coat.
Any color other than listed in the standard 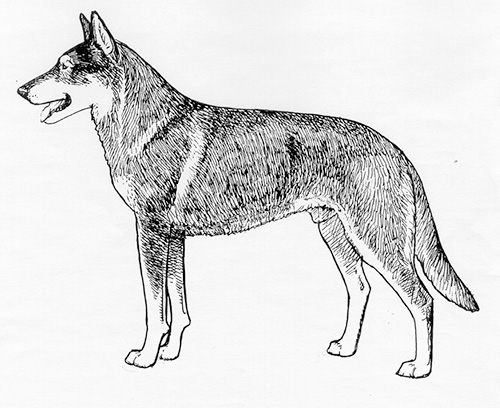