The Croatian Sheepdog (also known as the Hrvatski Ovcar) is a native breed that is descended from the dogs the Croats brought with them when the settled the land. It has been bred and used as a sheep and cattle herder in the plains of Slavonia for centuries. The earliest written document that has been found about the breed dates from the year 1374.

The Croatian Sheepdog was recognized by the United Kennel Club July 1, 2006.

The Croatian Sheepdog is a medium sized, rectangular shaped, black dog with short hair on its head and legs.

The breed is lively, attentive, modest and easy to train.

Fairly light and wedge shaped, with the muzzle slightly shorter than the skull.

Broadest between the ears, lean and oval in shape when viewed from above. The cheeks are rounded and the frontal furrow is not marked. The occipital protuberance can be felt. There is a slight stop.

Lean and tapering, not too blunt, with a straight nasal bridge. The lips are thin, tight fitting and elastic, with black edges.

The Croatian Sheepdog has a complete set of evenly spaced, white teeth meeting in a scissors bite. A level bite is acceptable.

Disqualification: Any missing teeth other than the first premolars. Undershot or overshot bite.

Always black and not prominent.

Disqualification: Lack of complete black pigment of the nose.

Medium in size and almond in shape, the eyes are set on a horizontal plane and are brown or black in color. The eyerims are dark and the expression is lively.

Ears may be pricked or semi-pricked, but pricked are more desirable. They are triangular in shape, of medium length and set slightly to the side of the head. Cropping is not permitted.

The shoulder blade is of medium length and slightly oblique. The upper arm is rather short and the shoulder angulation is open, making the forequarters appear upright.

The forearm is long and muscular with light bone. The pastern joint is lean and the pastern is slightly sloping.

In proportion, the body is longer than it is tall. The chest is rather broad and deep, but the forechest is not pronounced. The ribs are well sprung. The withers are not prominent. The back and loin are short and muscular. The rump is of medium length, slightly sloping and broad. There is a slight tuck up.

The hindquarters have fairly open angulation, matching the forequarter.

Seen from behind, the legs are parallel. The thighs are rather long and broad and the hock joint is close to the ground and moderately angulated.

Small and elongated in shape, with tight toes, firm pads and black or grey nails.

Puppies may be born without tails, or they are customarily docked to be approximately one inch in length. The tail is set moderately high, covered with bushy hair, and is carried low at rest and above the back when the dog is alert.

The coat is soft, dense, double and wavy or curly. The coat on the back is moderately long. On the face and front of legs it is short. The back of the front legs is fringed with hair and the hind legs have culottes.

Black, with a few white markings allowed only under the throat, on the chest and under the chest or on the feet and legs.

Disqualification: White markings on the head, body or tail.

Height for both males and females varies from 16 to 20 inches.

At a trot, the length of stride is moderate.

(An Eliminating Fault is a Fault serious enough that it eliminates the dog from obtaining any awards in a conformation event.)
Height under 16 inches or over 20 inches.

(A dog with a Disqualification must not be considered for placement in a conformation event, and must be reported to UKC.)
Unilateral or bilateral cryptorchid.
Viciousness or extreme shyness.
Albinism.
Lack of complete black pigment of the nose.
Any missing teeth other than the first premolars.
Undershot or overshot bite.
Yellow eyes.
Hanging ears.
Wooly coat or overly long coat.
Long hair on the face.
White markings on the head, body or tail. 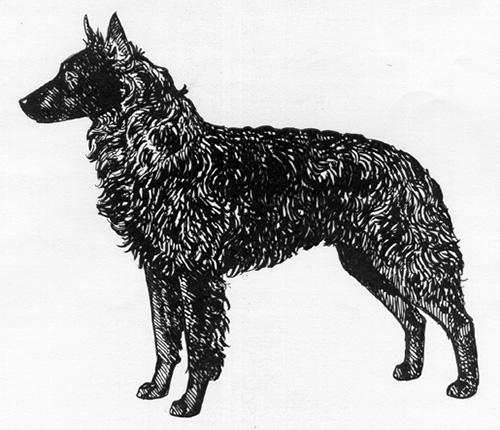