The Coton de Tulear originates from the island of Madagascar, off the coast of Africa in the Indian Ocean. The breed derives its name from the French word coton, meaning "cotton," and from the Madagascan port of Tulear. Tulear was once a popular port of merchant ships sailing the Indian Ocean, and it is believed that around the 15th or 16th century, European merchants introduced various Bichon-type companion dogs to Madagascar. It is probable that the breed evolved from the interbreeding of those Bichon strains. It is presumed that because of their beauty and affectionate personality, these dogs were offered to the King and Malagasy nobles. In the 17th century, the Coton de Tulear was adopted by the ruling "Merina" tribal monarchy, and it was forbidden that anyone other than royalty own the breed. Thus became the breed's prevalent title of "Royal Dog of Madagascar."
The Coton de Tulear was recognized by the United Kennel Club on January 1, 1996.

The Coton de Tulear is a small dog, with a long, cotton-like coat and round, dark, intelligent, expressive eyes. The ratio of height (measured at the withers) to body length is 2:3.

Happy, stable and sociable with people and with other dogs, the Coton de Tulears only purpose is to be a charming companion. This excellent temperament is a hallmark of the breed.

The head is short, measuring approximately two-fifths (2/5) the length of the body. When viewed from above, it is triangular in shape.

The skull is rounded on top and rather broad in relationship to its length. There is a slight stop and no prominence of either occiput or crest. Zygomatic arches are well developed.

The muzzle is short, just over half the length of the skull. The nasal bone is straight, and the lips are fine and tight, matching the nose in color.
Serious Fault: Bridge of nose convex (Roman nose).

A full complement of small, strong, white, perfect teeth meet in a scissors, level, or slightly undershot bite (reverse scissors, with no gap between the upper and lower teeth). The absence of the first premolars is not a fault. M3s are not taken into consideration.
Disqualification: Undershot or overshot (no contact between the upper and lower incisors). Absence of teeth other than the PM1 or M3.

The rather round, dark eyes are bright and lively. They are set well apart. Eyelids are fine, with dark pigment that matches the nose.
Serious Faults: Light eyes. Almond shaped eyes. Entropion. Ectropion.
Disqualifications: Wall eyes. Bulging eyes that show signs of dwarfism.

The thin, triangular, dropped ears are set high on the skull and are fine at the tips. They are carried close to the cheeks and in length reach to the corner of the lips.
Serious Faults: Ears too short. Ears lacking sufficient hair. Rose ears.
Disqualification: Prick or Semi-prick ears.

The shoulder blade and upper arm are approximately the same length, and meet at an angle of 120 degrees.

Are straight and parallel, with good bone. The pasterns are strong and slightly sloping. Dewclaws may be removed.

Rectangular in appearance, with a slightly convex topline. Withers are only slightly pronounced. The chest is well developed and deep to the level of the elbow. The ribcage is long and well sprung. The loin is well muscled and the croup is short, strong and sloping. There is a moderate tuck up.

Strongly muscled and well angulated at the hip.

Straight from hip to foot, with a dry, well defined hock joint that is moderately angulated. The presence of dewclaws on the rear legs is not penalized.

Small, round, with tight toes and pigmented pads.

Set low, with the length reaching below the hock joint. At rest, the tail is carried low with the tip curved up. On the move, it is carried gaily over the back with the tip pointing toward the neck, withers, back or loin.
Very Serious Faults: Ring tail. Short tail, not reaching to hock joint. Tail carried flat on the back. Tail absolutely straight, like a candle.
Disqualification: No tail.

Proper coat is a hallmark of the breed. It is very soft, supple and cottony in texture, never hard or harsh. The coat is dense and profuse, straight or slightly wavy. Skin is fine and tight, and may be pink or pigmented.
Disqualifications: Any atypical coat such as wooly, silky or extremely curly.

Ground color: White. A few slight shadings of light gray color (mixture of white and black hairs) or of red-roan (mixture of white & fawn hairs) are permitted on the ears. On the other parts of the body, such shadings can be tolerated on 10% of the entire coat as long as they do not alter the general appearance of the white coat. They are, however, not sought after.
Disqualifications: Any black marking on the coat or any shading covering more than 10% of the body.

Free and flowing, but somewhat short strided. The convex topline is maintained on the move.

(A dog with a Disqualification must not be considered for placement in a conformation event, and must be reported to UKC.)
Unilateral or bilateral cryptorchid.
Extreme viciousness or shyness.
Wall eyes.
Bulging eyes that show signs of dwarfism.
No tail.
Males weighing less than 8 pounds or more than 14 pounds. Females weighing less than 7 pounds or more than 12 pounds. (The minimum weight requirement is not applicable to dogs in the puppy class.)
Any atypical coat such as wooly, silky or extremely curly.
Any black marking in coat or any shading covering more than 10% of the body.
Lips, nose and eye rims completely lacking in pigmentation.
Undershot or overshot (no contact between the upper and lower incisors).
Absence of teeth other than the PM1 or M3.
Prick or semi-prick ears.
Albinism. 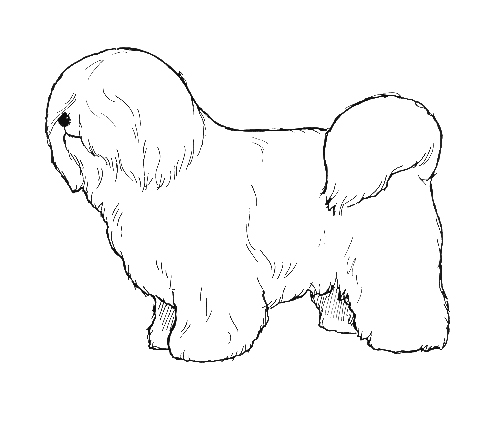 For more information on this breed, please visit the North American Coton Association