The term "cocker" refers to the woodcock, the game bird the breed specialized in hunting. The Cocker Spaniel in the United States is a different dog than the Cocker in England, and was developed from the early U.S. importations of the English Cocker Spaniels. To avoid confusion, it is often referred to as the "American" Cocker Spaniel.

Cockers are the smallest of the land spaniels. The breed is a flusher when working game. Unfortunately, very few are used for hunting any more. Today it enjoys the position of being the world’s most popular spaniel.

The smallest of the hunting land spaniels, the Cocker is compact and square bodied, with a tail that is generally docked, long ears and long hair. It comes in a variety of solid colors, as well as parti-color.

The head is cleanly chiseled and refined. The topline slopes slightly toward the strong, muscular hindquarters.

The Cocker Spaniel is a happy, people-oriented dog; and is a good family pet and companion. There should be no suggestion of shyness or viciousness.

The whole is always to be of primary consideration rather than any of the parts. Primary points of consideration include: a free, merry and even temperament; a sound, well-balanced body; and a keen inclination to work. Exaggeration of any of the parts is to be faulted according to the degree of deviation.

The well-proportioned head is in balance with the rest of the body.

The skull is well developed and rounded, but not exaggerated, with no tendency towards flatness. The eyebrows are clearly defined. There is a pronounced stop. The bone structure beneath the eyes is well chiseled, without prominence in the cheeks.

The distance from the tip of the nose to the stop is one-half the distance from the stop, up over the crown of the head, to the base of the skull. The muzzle is broad and deep, with square, even jaws. The full upper lip is of sufficient depth to cover the lower jaw.

A full complement of strong, good-sized, white teeth meet in a scissors bite.

The eyes are round and full, and look directly forward. Eye rim shape suggests a slightly almond shape. The color of the iris is dark brown, the darker the better. Expression is soft, intelligent, alert and appealing.

The nose is black in the Black and Black and Tan dogs. In other colors it may be brown, liver or black, the darker the better. Nose color harmonizes with eye rim color. The nose is of sufficient size to balance the muzzle and foreface. The well-developed nostrils are typical of field dogs.

The long, lobe-shaped (round) ears, of fine leather, are well feathered. They are set no higher than a line to the lower part of the eye.

The muscular, clean neck is long enough to allow the nose to easily reach the ground. It rises strongly from the shoulders, and arches slightly as it tapers to join the head.

The shoulders are clean cut and sloping without protrusion. They are set so that the upper points of the withers are set at an angle to allow for well-sprung ribs. Shoulder angulation allows for considerable forward reach without restriction.

The straight, strongly-boned, muscular forelegs are parallel to each other, and set close to the body. The elbows are well let down, and set directly below the highest point of the shoulder blade when viewed from the side, showing no tendency to turn in nor out. The pasterns are short and strong.

The short, compact, firmly-knit body conveys an impression of strength. The distance from top of the withers to the ground is 15 percent, or approximately two inches, more than the length from the top of the withers to the tail set. The strong back slopes evenly and slightly downward from the shoulders to the tail set. The chest is deep, with the lowest part no higher than the elbows. The brisket is sufficiently wide to allow for adequate heart and lung space, but not so wide as to interfere with forward leg movement. The ribs are deep and well sprung.

The hips are wide. The muscular hindquarters are well rounded.

The muscular, strongly-boned hind legs have well-angulated, powerful stifles. The thighs are clearly defined. The hocks are strong and well let down. They are parallel when viewed from behind, whether standing or in motion.

The round, compact feet are large and firm. Pads are well-developed, with thick, rough covering. Dewclaws on front and rear may be removed.

The docked tail is set on and carried on a line with the topline, or slightly higher. It is never straight up like a terrier's or so low as to indicate shyness. When the dog is in motion, the tail action is merry.

The coat is short and fine on the head. On the body, it is of medium length, with enough undercoat to give protection. The chest, ears, abdomen and legs are well feathered, but not so excessively as to hide the true lines and movement or to affect the breed’s appearance as a sporting dog or to interfere with field work. Coat texture is silky, flat or slightly wavy, and of a texture that permits easy care.

Trimming is permitted only to remove overabundant hair. The dog should always appear as natural as possible.

The following color varieties are found in the breed:
- Black (to Include Black and Tans);
- ASCOB (any solid color other than black);
- Parti-Color; and
- Sable.

Black, to include the Black and Tan (black with tan points). A small amount of white on the chest and/or throat is allowed.

Any solid color other than black (ASCOB). Also includes tan points. A small amount of white on the chest and/or throat is allowed.

Two or more definite well-broken colors, one of which must be white. Tan points are acceptable. Roans are classified as Parti-Colors. Any of the usual roaning patterns are acceptable.
Sable. A lacing of black hairs over a lighter background color. Sables may be solid or parti-colored.
Tan Points: The color of the tan points range from light cream to dark red. Amount of tan trim is restricted to 10 percent or less, of the color of the dog. Tan points on the Black, ASCOB, or Sable are found:
- over each eye
- on the sides of the muzzle and on the cheeks
- on the undersides of the ears
- on all feet and/or legs
- under the tail
- markings on the chest are optional; neither absence nor presence is penalized.

(In UKC Conformation events, the Cocker Spaniel is not divided by the three color varieties.)

Serious Faults: Traces of tan markings instead of well-defined markings. Tan marking not readily visible. Tan on the muzzle that extends up and over and joins. Absence of tan points in any of the specified locations in an otherwise tan-pointed dog.

Disqualifications: On Blacks, Black and Tans, ASCOBs, and Sables, white anywhere other than a small amount on the chest and/or throat. Tan points (markings) in excess of 10 percent of total body color. In Parti-Color, primary color that is 90 percent or more. Merle color. Albinism.

The dogs always possess the typical spaniel gait. It is characterized by drive and the appearance of power, rather than speed (although the Cocker Spaniel is capable of speed), indicative of the breed’s use as a hunter in dense cover and upland terrain. Balance between the front and rear assemblies is a prerequisite to good movement. Correct angulation and structure allow forward reach without constriction, counter-balanced by the driving force from the strong, powerful rear. Above all, the Cocker Spaniel exhibits a coordinated, smooth, effortless gait.
Serious Fault: Excessive angulation.

(A dog with a Disqualification must not be considered for placement in a conformation event, and must be reported to UKC.)
Unilateral or bilateral cryptorchid.
Viciousness or extreme shyness.
On Blacks, Black and Tans, ASCOBs, and Sables, white anywhere other than a small amount on the chest and/or throat.
Tan points (markings) in excess of 10 percent of total body color.
In Parti-Color, primary color that is 90 percent or more.
Merle color.
Albinism. 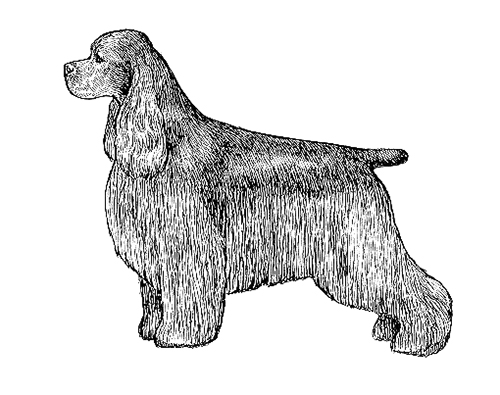