There are several theories regarding the origin of the Clumber Spaniel. One states that it was developed in France by the French Duc de Noailles. Threatened by revolution, he transferred his dogs to the Duke of Newcastle, his close friend in England. The Duke's estate, Clumber Park, undoubtedly was the source of the breed’s name. Some believe that crosses with the heavy Alpine Spaniel and Basset Hound helped produce this breed. Due to his heavy build, he is slower at his work of upland hunting than his lighter-boned spaniel cousins.

The Clumber Spaniel was recognized by the United Kennel Club in 1980.

General appearance is one of great power; a long, low, heavy-looking dog with a large, massive head. They are deliberate and sedate in movement, with a characteristic rolling, but never clumsy, gait. The coat is silky and straight, extremely dense, and white with lemon or orange colored markings.

The sum of their characteristics indicates a dog that has the power and endurance to move through heavy underbrush in the pursuit of game.

Their expression is pensive, and their stature is dignified, accompanied by great enthusiasm for work and play. In temperament, they are a loyal and affectionate breed. They may be reserved with strangers, but are never hostile or timid.

The head is massive.

The flat topskull has a pronounced occiput. A slight furrow runs between the eyes, up through the center of the skull. The stop is marked. Brows are heavy.

The broad, deep muzzle is conducive to retrieving. Flews on the upper jaw are strongly developed, overlapping the lower jaw; giving a square outline when viewed from the side.

The large eyes are set deep in either a diamond-shaped rim or a rim with a "V" on the bottom and a curve on the top. Some haw may show. They are dark amber in color.

The nose is large and square. Acceptable colors are shades of brown, to include beige, rose and cherry.

The ears are triangular in shape, broad at the top, with a rounded lower edge. They are set low and attached to the skull at about eye level. The ear leather is thick.

The long, muscular neck fits into well-laid-back shoulders. Some slackness, or dewlap, is not to be faulted.

The upper arm is of sufficient length so that the elbow is placed directly in a line with the withers. The short, straight forelegs have heavy bone. The elbows are held close. The strong pasterns are slightly sloped. Dewclaws may be removed from the forelegs.

The straight, firm back is long and level. There is a slight arch over the loin. The chest is wide and the brisket deep; with well-sprung ribs.

The thighs are heavily muscled. When viewed from the rear, they appear round and broad. The stifle is moderately angulated. The rear pasterns are short and perpendicular to the ground.

The large, compact forefeet have thick pads. The hind feet are not as large as the forefeet but are of substantial size; and are compact, with thick pads.

The docked tail is set on just below the topline, and is carried parallel to the ground. Tail may be docked or natural, with no preference.

The ears are slightly feathered with straight hair. The neck frill is good and is never to be shaved. The weather-resistant body coat is dense, straight and flat.

Trimming of the whiskers is up to the discretion of the owner. The rear pasterns may be trimmed. The hair on the feet may be trimmed to facilitate ease and efficiency of fieldwork, and to show the natural outline. No other trimming is acceptable.

The primary body color is white, accompanied by lemon or orange markings. Equal consideration is given to markings around one or both eyes or to a white face. The fewer the markings on the body, the better. A spot near the set-on of the tail is common and acceptable. Freckles (ticking) on the muzzle and forelegs are acceptable.

Their characteristic gait is easy and free, accompanied by good reach in the front and a strong drive from the rear. The hocks drive in a straight line. The proper Clumber “roll”, resulting from short legs and a wide body, occurs when the dog converges toward a centerline, rotating the hips downward while maintaining a level and straight back. This is a comfortable, efficient gait that can be maintained for a day of work in the fields.

Faults: Crossing over. Elbowing out. Rocking or twisting of the hocks. 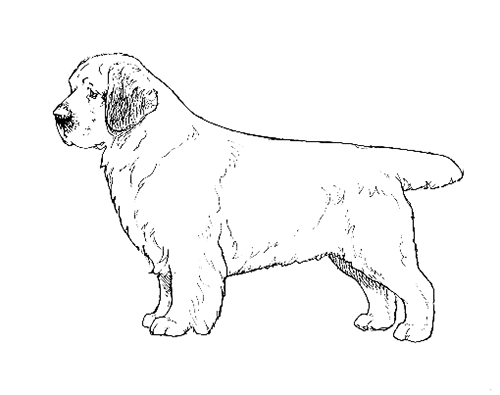