Coins and engravings appear to be proof that the Cirneco Dell’Etna has existed in the Etna region of Italy since many centuries BC. It is a primitive style hunting dog that was mainly used in the pursuit of wild rabbits.

The Cirneco Dell’Etna was recognized by the United Kennel Club in 2006.

The Cirneco Dell’Etna is an excellent hunting dog, well adapted to difficult terrain. The breed is active and lively, yet gentle and affectionate with people.

The skull is oval in shape when viewed from above. In profile, the top of the skull is nearly flat. It’s width behind the eyes should not be more than half the length of the entire head. The frontal furrow is slightly marked, and the occipital bone is not prominent. There is a well accentuated stop. The cheeks are flat.

The Cirneco Dell’Etna has a complete set of evenly spaced, white teeth meeting in a scissor bite. The jaws are normally developed, though they do not appear strong.

Rather large, and rectangular in shape. The color corresponds to the color of the coat, ranging from flesh colored through to dark chestnut.

The eyes are fairly small and ochre or grey in color; they should never be brown or dark hazel. They are laterally set, oval in shape, and have a soft expression. The color of the eyelids corresponds to the color of the nose pigment.

The ears are erect and rigid, triangular in shape, with narrow tips, and set high and quite close together. Their length is not more than half the length of the head.

The neck is approximately the same length as the head. It is well arched at the crest, with defined muscles at the crest and no dewlap.

The forelegs are straight and parallel, with light but solid bone. The length of the foreleg is slightly more than half the height at the withers. The pastern is flat, dry and slightly sloping.

The length of the body is equal to the height at the withers. The withers are narrow and fit cleanly at the base of the neck without a break. The chest is fairly narrow and reaches to, or nearly to, the elbow. The ribs are lightly sprung, but not flat. The topline slopes gracefully from the withers towards the rump. The loin is short and firm. The croup slopes at an angle of approximately 45 percent off the horizontal. The muscles of the rump are not visible. The belly is lean and tucked up.

The hindquarters are straight and parallel. The angle of the pelvis and femur is approximately 115 degrees. In profile, a line dropped from the rearmost projection of the pelvis will fall directly in front of the toes.

The upper thigh is long and wide, with flat muscles. The rear edge of the buttock is slightly convex. The angulation of the stifle is about 120 degrees. The angle of the hock joint is about 135 degrees. The rear pastern is cylindrical and vertical. There are no dewclaws.

Long, low set, and rather thick for its entire length, carried saber fashion in repose and lifted above the back, trumpet fashion, when the dog is alert.

Disqualification: Tail curved over the back.

Smooth on the head, ears and legs. Longer (about an inch), but sleek and close lying on the body and tail. The hair is straight and stiff like horse hair.

The skin is fine and close, ranging in color according to the color of the coat. The mucous membranes and the nose must never show black patches or lack of complete pigmentation.

Self colored fawn, ranging from fairly dark to Isabella. Fawn with white markings on head, chest, feet, tail tip and belly (white collar is less appreciated). Solid white or white with orange patches is acceptable, but not preferred. A fawn coat that has a mix of light and darker hairs is allowed.

Disqualifications: Any black, brown or brindle in the coat.

The natural gait is a gallop, with intermittent trotting phases.

(An Eliminating Fault is a Fault serious enough that it eliminates the dog from obtaining any awards in a conformation event.)
Size over the stated tolerance in the standard, or under the allowed size by more than ¾ (three-quarters) of an inch.

(A dog with a Disqualification must not be considered for placement in a conformation event, and must be reported to UKC.)
Unilateral or bilateral cryptorchid.
Viciousness or extreme shyness.
Albinism.
Severe undershot or overshot bite.
Black nose.
Wall eyes.
Black eye rims.
Bat ears or hanging ears.
Black nails or pads.
Tail curved over the back.
Any black, brown or brindle in the coat. 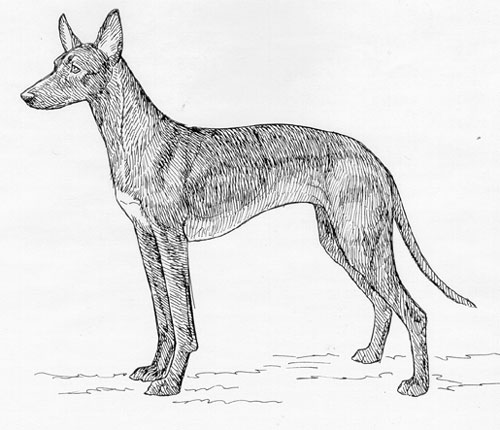