The origin of the Cimarron Uruguayo is uncertain, though it is thought to be descended from dogs that were brought into Uruguay by the Spanish and Portuguese conquerors. The dogs that were left behind bred amongst themselves, and only the fittest survived. Eventually, the people of the region recognized the value of the dogs and domesticated them for use as guard, herding and big game hunting dogs.

The Cimarron Uruguayo was recognized by the United Kennel Club in 2006.

The skull is wider than it is long, with a slight occipital protuberance. There is a moderate stop.

The muzzle is broad and powerful, only slightly shorter than the skull. The upper lips cover the lower lips, but there are no pendulous flews. The cheeks are well-developed, but not bulging.

The Cimarron Uruguayo has a complete set of evenly-spaced, white teeth meeting in a scissors bite.

The eyes are medium-sized, almond-shaped, and any color of brown, though in accordance with the coat color, darker is preferred. The eye rims are tight-fitting and fully pigmented. The expression is inquisitive.

The ears are medium-sized and triangular in shape; dropped, but they do not hang close to the cheeks. The ears may be cropped in a rounded shape such as like a puma ear. There should not be more than half the ear removed.

Strong, well-muscled, and not too long.

The shoulder blades and upper arms are approximately the same length, and are well laid back.

The legs are straight, with strong bone, and the elbows are held close to the body. The length of the leg from elbow to ground is one half the height at the withers. The pasterns are slightly sloping.

The body is slightly longer than tall. The chest is deep to the elbow, and broad, with well developed forechest. The ribs are well-sprung but not barrel shaped. The withers are well-defined, and the topline is level or slightly saddle shaped. The loin is short, strong and slightly arched. The croup is long and broad, sloping at 30 degrees off the horizontal.

The hindquarters are well muscled and powerful. The dog stands with its hipbones at the same level as its withers.

The upper thighs are well-developed, and the stifles are well-angulated. The rear pasterns are of medium length.

The front feet are oval-shaped, with strong pads and well-knit toes. The hind feet are round and tight.

The tail is thick and moderately low set, reaching to the hock. At rest, it is carried low. In motion, it is carried horizontally or with a slight upward curve.

Short, smooth and close, with undercoat.

Serious Fault: White markings, except as specified.
Disqualification: Any color not mentioned.

Serious Fault: Over or under the tolerated size.

Free and effortless, with good reach and drive. As speed increases, the legs converge towards a center line of travel.

(A dog with a Disqualification must not be considered for placement in a conformation event, and must be reported to UKC.)
Unilateral or bilateral cryptorchid.
Viciousness or extreme shyness.
Undershot or overshot.
Albinism.
Distinctly long coat.
Any color not mentioned. 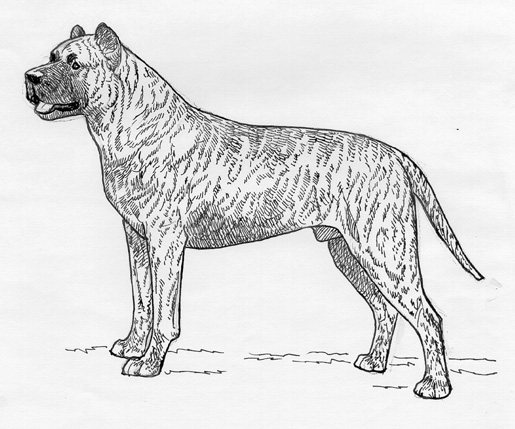