The Chow Chow originated in Asia thousands of years ago. While the ancestors of this breed are unknown, the breed can be traced back at least 2,000 years to the Han dynasty of China. The Chow Chow originated as a sporting dog, used by Chinese aristocrats to hunt pheasant and partridge. The name Chow Chow is derived from pidgin-English slang used by sea captains to describe the contents of cargo crates full of miscellaneous Chinese goods. These oriental dogs became popular during the Victorian era in England and first appeared in the United States in 1890. Today, the Chow Chow is primarily a family companion and guard dog.

The Chow Chow was recognized by the United Kennel Club in 1934.

The Chow Chow is a medium-sized, sturdily built, Spitz-type dog of leonine appearance, with a square body; large, broad head with a short, broad and deep muzzle; prick ears with rounded tips; and a short-coupled body. The squareness of his body is emphasized by his high-set tail, which is carried on the back, and by the lack of angulation in his hindquarters. The hock joint and metatarsals lie in a straight line below the hip joint. The stilted gait resulting from these unique rear quarters is essential to correct type in this breed. The Chow Chows face has a characteristic scowl. His tongue is blue-black, and his coat may be smooth or rough.

The Chow Chow is a dignified, aloof dog, with a keen intelligence. It is natural for the Chow to be reserved with strangers, but never timid or aggressive. Part of the Chow Chows reserve with strangers is due to the dogs limited peripheral vision. Strangers approaching a Chow Chow should take this into consideration.

The head is large in proportion to the size of the body, but not so much as to make the dog appear top-heavy. Viewed from the side, the skull and muzzle are approximately parallel, joined by a moderate stop, which appears steeper than it is because of the padding over the brows. The muzzle is shorter than the skull but never less than one-third the length of the skull.

Viewed from the front, the Chow Chows characteristic scowl is achieved by a marked brow with a padded button of skin just above the inner corner of the eye; by sufficient loose skin to form frowning brows and a distinct furrow between the eyes beginning at the base of the muzzle and extending up the forehead; by correct eye shape and placement; and by correct ear shape, carriage, placement.

The skull is broad and flat, viewed from side or front.

The muzzle is broad and deep, with plenty of fill under the eyes and no taper from the stop to the nose. The length from stop to nose is equal to the depth. The square appearance of the muzzle is caused by a combination of correct bone structure and padding of the muzzle and lips. When the mouth is closed, the upper lips completely cover the lower. Lips, inner mouth tissue, and gums are black. The top surface and edges of the tongue are solid blue-black, the darker the better.

Faults: Lips, inner mouth tissue, or gums any other color than black, or spotted; pendulous lips; excessive padding of the muzzle causing it to appear other than square.
Disqualification: Top surface or edges of the tongue red, pink, or spotted with red or pink.

The Chow Chow has a complete set of good-sized, evenly spaced, white teeth meeting in a scissors bite.

Disqualifications: Nose spotted or any other color than those allowed.

Eyes are dark brown, almond-shaped, and of moderate size. They are set deeply, obliquely, and wide apart. Eye rims are black and tight. The padded skin around the eyes and the brow must not obscure the pupils. The correct size, shape and placement of the eyes create an Oriental expression.

Ears are prick with slightly rounded tips. They are small, triangular and moderately thick. The ears are set wide apart and carried stiffly erect. They are tilted forward over the eyes and slightly towards each other, contributing to the scowling expression of the breed, which should never be achieved by loose, wrinkled skin on the head.

Disqualifications: Ear breaking at any point from the base to the tip; ear not carried stiffly erect.

The neck is well muscled, slightly arched, and with sufficient length and power to carry the head proudly erect when standing at attention.

The Chow Chows square body is an essential element of breed type. The length of body, measured from prosternum to point of buttocks, is equal in length to the height, measured from withers to ground. The body is compact, broad, deep and well muscled. The topline is short and level. The chest is broad, muscular, and deep, extending to the elbow. Viewed from the side, the prosternum extends slightly in front of the point of shoulder. The ribs are well sprung at the top but narrow at the lower end to allow the shoulder, upper arm, and elbow to fit smoothly against the chest wall. The loin is short, well-muscled, broad, and deep. The croup is short, broad, and level.

The hindquarters are broad, powerful, and well muscled, the same width as the forequarters.

The rear legs are approximately as heavy in bone as the forelegs. Viewed from the rear, the legs are straight, parallel, and set wide apart. The rear pasterns are short and perpendicular to the ground. Viewed from the side, the stifle joint shows little angulation and the hock joint is well let down and nearly straight. The hock joint and rear pastern lie in a straight line below the hip joint.

Feet are round and compact, with thick pads. Dewclaws may be removed.

The tail is set high and carried close to the back at all times.

There are two equally acceptable coat types. Both are double-coated. No preference is given to either type.

The outer coat is abundant, thick, straight, and rather coarse in texture. The undercoat is soft, fine, and dense. The coat stands away from the body and forms a profuse ruff around the head and neck, framing the face. The hindquarters and tail are well feathered. Coat length varies widely, and males may have a longer coat and ruff than females. Judges should emphasize density and texture more than length when evaluating this breed. Trimming should be discouraged except the face and legs may be neatened by trimming the whiskers, feet, and pasterns.

The outer coat is hard, dense, and smooth with no obvious ruff or feathering on the legs or tail.

The Chow Chow comes in five equally acceptable colors:
Red (light golden to deep mahogany), black, blue, cinnamon (light fawn to deep cinnamon), and cream. Colors are solid but may have lighter shadings in the ruff, tail, and feathering.

A mature Chow Chow ranges in height from 17 to 20 inches, measured at the withers. Correct proportions (square body, width of forequarters equal to width of hindquarters, distance from elbow to ground equal to one-half the height at the withers, lowest point of chest level with elbows) are to be given more emphasis when judging this breed than size.

Correct Chow Chow gait is an essential element of breed type. Viewed from the side, the rear gait is short and stilted. The rear leg moves up and forward like a pendulum, causing a slight bounce in the rump. There is little extension either forward or to the rear. There is no roll through the midsection. Viewed from the front or rear, the legs move straight forward. As speed increases, feet tend to converge toward center line of balance. The Chow Chow is somewhat lacking in speed but has excellent endurance.

(A dog with a Disqualification must not be considered for placement in a conformation event, and must be reported to UKC.)
Unilateral or bilateral cryptorchid.
Viciousness, marked shyness, or cowardliness.
Top surface or edges of the tongue red, pink, or spotted with red or pink.
Nose spotted or any other color than those allowed.
Ear breaking at any point from the base to the tip.
Ear not carried stiffly erect.
Albinism. 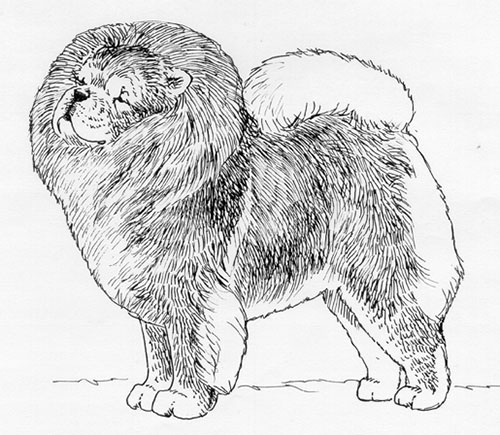