The Chinook is a Northern breed derived from a single ancestor. The father of the breed, Chinook, was born on author/explorer Arthur Walden's Wonalancet, New Hampshire, farm in 1917. He was one of three pups born to a "Northern Husky" female sired by one of the dogs on Pearys North Pole team. Chinooks sire was a large, mixed breed dog. Chinook was a sport, a phenomenon of nature, not resembling either of his parents. He was an outstanding sled dog and accompanied Admiral Byrd's South Pole expedition in 1927. Chinooks offspring, who inherited his coloring, size and general characteristics, were bred to combine the strength of the large freight dog with the speed of the smaller racing sled dogs. In the early 1900's, the Chinook set records for distance covered, loads carried and running time. This breed has been maintained through the years by a small number of dedicated fanciers.

The Chinook was recognized by the United Kennel Club in March 1991.

The Chinook is a large dog capable of pulling light to heavy loads. The Chinook has a broad skull, a tapered muzzle slightly shorter in length than the skull, a variety of ear carriages, brown almond-shaped eyes, a dense medium-length double coat of tawny color and a low-set saber tail that hangs down with an upward curve at the tip when the dog is in repose, but may be carried in a graceful sickle curve when the dog is alert. This breed is presented in a completely natural condition with no trimming, even of whiskers. Honorable scars are not to be faulted. The Chinook was developed to be a working sled dog and any deviation from the standard which compromises that purpose should be penalized in proportion to the degree of the deviation.

The Chinook is a Northern breed, bred to perform many of the same tasks as the Spitz-type breeds and with some Spitz-type ancestors in the background. The Chinook, however, bears more resemblance to the Mastiff-type dogs than the Spitz-types in that he has a more rectangular shaped head, a saber tail, and a close-fitting, tawny-colored coat made up of a coarse-textured outer coat and a soft, dense undercoat. Other typical Chinook characteristics include webbed feet with thick, well-furred pads and the aquiline nose. One of the key breed characteristics is the Chinook temperament: calm, non-aggressive, with a willing, friendly disposition. Chinooks are bred to work in teams and do not exhibit dog aggression. Notwithstanding its gentle, even temperament, the Chinook is a dignified dog who may be reserved with strangers or in unfamiliar surroundings. A Chinook should, however, never appear timid or aggressive. In action, the Chinook is graceful but purposeful, alert but calm. His expression reflects his intelligence; his proud carriage reflects his dignity.

This breed matures slowly and individual dogs may not reach their prime until as late as four years of age.

The head is of moderate length, about 10 inches, more or less, depending on the size of the dog. The length of the muzzle, measured from stop to the end of the nose, is slightly shorter than the length of the skull, measured from occiput to stop. The skull and muzzle are parallel to one another when viewed from the side, and joined by a moderate stop. The skin on the head is tight with no wrinkles.

When viewed from the front, the skull is broad and slightly domed. The width of the skull is approximately equal to the length of the skull from occiput to stop. The stop is moderate and there is a shallow furrow running vertically from the stop to the occiput. The skin on the face and skull is free from wrinkles. The cheeks have a chiseled appearance.

The muzzle tapers slightly from base to nose, is moderately deep and not pointed. The distance from the stop to nose is slightly shorter than the length of skull from occiput to stop. The bridge of the muzzle is slightly aquiline, and roughly parallel to the top of the skull. The nose is large, always solid black, and projects slightly over the mouth. The lips are black in color. The top lip overhangs the lower lip very slightly and the corners of the lower lip are slightly pendulous.

The jaw is of moderate width with a full complement of strong, evenly spaced, white teeth meeting in a scissors bite. The line of the incisors is straight and perpendicular to the outside lines of the jaw.

The eyes are almond-shaped and of moderate size, with intelligent expression. Dark brown eyes are preferred but lighter, amber eyes are acceptable. Eye rims are dark-pigmented. A dark, apostrophe-shaped accent mark at the inner corner of the eyes is preferred.

The ears are well furred, medium-sized and set wide apart on the head. The ear leather is thick from base to tip. The inner edge of the ear is in line with the outer corner of the eye just below it. Drop, prick, or helicopter ears are acceptable. Helicopter ears are similar to flying ears except that the outer edges of the ears fold inward and the inside edges of the ear stand out from the head, parallel to the ground. For aesthetic purposes, matching ears are preferred.

The neck is strong and moderately arched. The skin on the neck is pliable but does not form a prominent dewlap.

In profile the body measured from point of shoulder to point of buttocks is slightly longer than tall (measured at the withers). The topline of the back is straight and strong with a slight arch over the loin to allow for efficient transfer of thrust from the rear quarters. The ribs are well-sprung out from the spine, forming a strong back, then curving down and inward to form a deep body. The chest is deep, extending nearly to the elbow, and moderately broad. The deepest part of the chest is just behind the forelegs. The forechest extends well in front of the legs. There is a definite tuck-up with a clearly defined waist at the flank. The body is extremely flexible, and is well-muscled and hard.

Faults: Body too short or too long. Barrel-shaped or slab-sided ribs. Shallow or narrow chest.

The shoulders are moderately laid back. The scapula and the upper arm form an angle of about 110 degrees. When standing, the forelegs are placed directly under the withers. The muscles of the upper leg are firm and well developed. The forelegs are straight, with strong, moderately short, slightly sloping pasterns, and moderate bone. The shoulder blade and the upper arm are roughly equal in length. Elbows are neither close to the body nor out but are set on a plane parallel to the body. There should be a slight rotation of the pastern causing the dog to toe out not more than 10 degrees so that the dog pushes off from the center toes. Front dewclaws may be removed.

The Chinook has a saber tail with an overall well-furred appearance. The tail is distinctly flattened on the sides, with longer hair occurring on the underside and at the base of the tail. It is set just below the topline and is carried in a graceful sickle curve when the dog is alert. When the dog is standing, the tail hangs downward, approximately to the hocks, with a slight upward curve at the tip. The Chinook tail is never docked.

Chinooks have a double coat of medium length hair. The undercoat is thick, soft, and downy in texture. The outer coat is coarse, and the hair lies close to the body. Less dense coats are normal in very warm climates. The neck is well-furnished with hair, which forms a protective ruff blending into the apron. The tail is well-furred, with longer hair at the base and underside of the tail. The groin and inside of the rear legs are protected by coat.

Faults: Any color other than tawny.
Disqualification: Albinism

Height for mature males ranges between 23 and 27 inches at the withers, with an average weight of 70 pounds. Height for mature females ranges between 21 and 25 inches, with an average weight of 55 pounds. At all weights, the appearance is lean and muscular, with moderate bone. Gender differences should be easily discernable, with the females somewhat smaller and lighter than the males. In judging Chinooks, size does not take preference to quality.

The Chinook must be exhibited at a trot. This gait is smooth, efficient and effortless. When the front leg is fully extended, the foot should reach to a perpendicular line drawn from the center of the chin to the ground. Viewed from behind, the rear pads should be fully visible. Viewed from the side, some smooth up and down movement at the trot is allowed because this is consistent with proficiency at the gallop. If a Chinook paces in the ring, the judge should ask to have the dog gaited again into a trot. No Chinook should be penalized for pacing unless it cannot demonstrate the correct trotting gait.

(A dog with a Disqualification must not be considered for placement in a conformation event, and must be reported to UKC.)
Viciousness or extreme shyness.
Unilateral or bilateral cryptorchid.
White dogs.
Albinism.
Rear dewclaws. 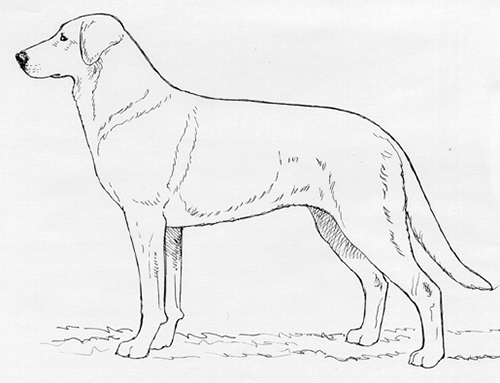 For more information on this breed, please visit the Chinook Owners Association, Inc.