In this breed, excessive skin folds, especially where they interfere with normal function, such as movement and sight, and where obvious and observable skin irritations result, are not to be condoned.

The Chinese Shar-Pei is thought to have developed in Southern China. Figurines bearing a resemblance to the Shar-Pei have been dated back to the Han Dynasty, at least 200 B.C. The breed nearly became extinct during the communist revolution, when dogs were ruthlessly exterminated by the government. A small number of breeders in Hong Kong and Taiwan were able to keep the breed alive. In 1966, the first Shar-Pei were imported into the United States.

The Chinese Shar-Pei was recognized by the United Kennel Club in 1985.

The Chinese Shar-Pei is a medium-sized, compact dog with a square, short-coupled body. Height, from the ground to the withers, is approximately equal to the length from the point of the breastbone to the point of the rump. The head is slightly large in proportion to the body, with a characteristic “hippopotamus” muzzle and small, high-set, flat-lying ears. The tail is set high and curled over or to either side of the back. The skin covering the head and body is abundant, loose and wrinkled in puppies, but wrinkles may be limited to the head, neck, withers and base of the tail in adults. The coat is harsh-textured and no longer than one inch. Females may be slightly longer in body and smaller than males.

The Chinese Shar-Pei is calm, confident, dignified and aloof. It is natural for the Shar-Pei to be reserved with strangers but never timid or aggressive. Everyone approaching a Shar-Pei should be aware that, because of the wrinkles on the head, combined with the deep-set eyes, peripheral vision may be limited. Despite its independent nature, the Shar-Pei is very devoted to its own family members. The Shar-Pei’s loose skin and wrinkles, extremely harsh coat, hippopotamus muzzle and blue-black or lavender tongue are other essential characteristics.

The head is slightly large in proportion to the body. The skin on the head is loose and forms wrinkles on the forehead, continuing into side wrinkles framing the face. Viewed from the side, the skull and muzzle are approximately parallel and equal in length.

Viewed from the front, the Shar-Pei’s characteristic scowl is achieved by a marked brow with a padded button of skin just above the inner corner of the eye; by sufficient loose skin to form frowning brows; and distinct wrinkles between the eyes beginning at the base of the muzzle and extending up the forehead and around the face; by correct eye shape and placement; and by correct ear shape, carriage, placement.

Eliminating Fault: Excessive wrinkling on the head in adults.

The skull is broad and flat, viewed from side or front.

The muzzle is broad and deep, with plenty of fill under the eyes and no taper from the stop to the nose. The square appearance of the muzzle is caused by combination of correct bone structure and padding of the muzzle and lips. When the mouth is closed, the upper lips completely cover the lower. The lips and top of muzzle are well-padded and may cause a slight bulge above the nose. The top surface and edges of the tongue, lips, inner mouth tissue, and gums are solid bluish-black, except in dilute colors where the pigment is solid lavender. In hot weather, the tongue pigment may lighten. This should not be confused with poor pigmentation.

The Chinese Shar-Pei has a complete set of good-sized, evenly spaced, white teeth meeting in a scissors bite.

Eliminating Fault: Any deviation from a scissors bite.

The nose is large and broad with well-opened nostrils. Nose color is black in fawns, reds and blacks. In dilute-colored dogs, the nose is self-colored. Cream colored dogs with black pigment may have a lighter nose.

Eyes are dark brown, almond-shaped, and small. In the dilute colored dogs, eye color may be lighter. Eyes are set deeply, obliquely, and wide apart. The correct function of the eyeball and lids should never be disturbed by surrounding skin, folds or hair.

Eliminating Fault: Cherry Eye.
Disqualifications: Round, bulging eye. Skin folds or hair interfering with the normal function of the eye. Entropionism. Any sign of irritation to the eyes or lids.

Ears are extremely small and triangular with thick ear leather and slightly rounded tips. Ears are set high, wide apart and forward on the skull, lying flat against the head and pointing toward the eyes. Edges of the ear may curl. The ears have the ability to move. Disqualification: Pricked ears.

Neck is moderate in length and set well into the shoulders. Loose skin forms moderate to heavy folds and abundant, but not excessive, dewlap about the neck and throat.

The Chinese Shar-Pei’s shoulders are well muscled and well laid back.

The forelegs are straight, of moderate length, and have good bone. Elbows are close to the body. Pasterns are strong, slightly sloping and flexible. The skin on the forelegs shows no wrinkle. Front dewclaws may be removed.

Hindquarters are muscular and moderately angulated.

Viewed from the rear, the legs are straight, parallel, and set moderately wide apart. The rear pasterns are short and perpendicular to the ground. Rear dewclaws must be removed.

Serious Faults: Wrinkles on the upper or lower thighs or on the rear pasterns, as well as thickening of the skin on the hocks.

The feet are of moderate size and compact, with well knuckled toes.

The very high-set tail is thick and round at the base, tapering to a point and curling over or to either side of the back. The anus appears to tilt upward due to the set and carriage of the tail.

The extremely harsh coat is an essential element of Shar-Pei breed type. The coat is single, straight and stands away from the trunk of the body, while lying flatter on the limbs. Coat length may range from the extremely short “horse coat” up to one inch in length at the withers, called a “brush coat.” The coat appears healthy but is not shiny. The Shar-Pei coat may not be trimmed.

Serious Faults: Soft coat; wavy coat; coat length greater than one inch at the withers; trimmed coat.
Disqualifications: In adults, excessive and heavy folds of skin on the body (except for the withers and the base of the tail).

Coat may be any solid color or sable. The solid color may include darker shading, usually down the back and on the ears. Darker hairs of the same base color may be sprinkled throughout the coat.

Disqualifications: Albinism; any color pattern other than described (brindle, parti-colored, spotted, patterned in any combination of colors).

The movement of the Shar-Pei is to be judged at a trot, preferably on a loose lead. The gait is free and balanced, with the feet tending to converge toward a center line of gravity when the dog moves at a vigorous trot. The gait combines good forward reach and a strong drive in the hindquarters. Proper movement is essential.

(A dog with an Eliminating Fault is not to be considered for placement in a conformation event, nor are they to be reported to UKC.)
Any deviation from a scissors bite.
Lower lip folding over lower incisors (tight lip).
Excessive wrinkling on the head in adults.
Cherry Eye.
Inguinal hernia.
Hiatal hernia.

(A dog with a Disqualification must not be considered for placement in a conformation event, and must be reported to UKC.)
Unilateral or bilateral cryptorchid.
Viciousness or extreme shyness.
Albinism.
Solid pink tongue.
Pricked ears.
Incomplete tail.
Any color pattern other than described in standard (brindle, parti-colored, spotted, patterned in any combination of colors).
Entropionism.
Any sign of irritation to the eyes or lids.
Round, bulging eye.
Skin folds or hair interfering with the normal function of the eye.
In adults, excessive and heavy folds of skin on the body (except for the withers and the base of the tail). 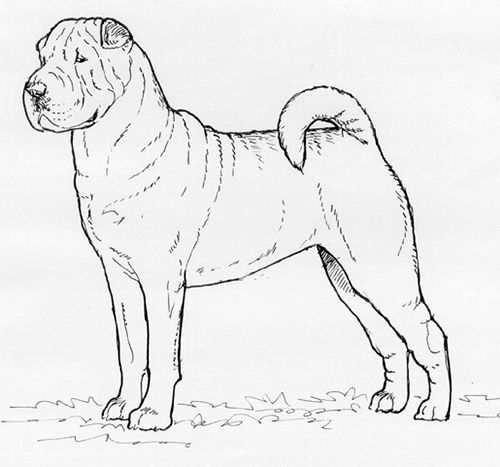