The Chinese Crested is one of several hairless breeds in the world. They are believed to have evolved from the hairless dogs of Africa. They were traded by merchants and sailors and therefore were found in port cities around the world.

The Chinese Crested enjoyed a temporary popularity in the late 1800s and early 1900s in the United States, then again became popular in the 1970s.

The Chinese Crested was recognized by the United Kennel Club on January 1, 1995.

The Chinese Crested is a fine-boned, elegant, graceful, toy-type dog that comes in two coat types - Hairless and Powderpuff. The two types are born in the same litter. They are rectangular in proportion, and balanced to allow for freedom of movement. The Chinese Crested is fine-boned and slender, but not so refined as to appear breakable; nor do they have a robust, heavy structure.

The breed is gay, alert, playful and entertaining and they serve as loving companions.

The head is wedge-shaped and smooth, without excess wrinkle, and presents a graceful appearance with an alert, intense expression.

Tapering, but not pointed, with fine, tight lips.

A full complement of strong white teeth meet in a scissors or level bite.
Missing, mis-aligned or primitive-looking teeth are not to be faulted in the Hairless variety. Missing teeth in the Powderpuff variety are to be faulted.

The medium sized, almond shaped eyes are set wide apart. They are very dark in dark colored dogs, but may be somewhat lighter in light colored dogs. There is little or no haw or white showing. Both eyes must be the same color. Eye rims match the coloring of the dog.
Serious Faults: Blue or very light colored eyes. Eyes of two different colors.

Narrow, in keeping with the muzzle, and solid in color. A dark nose is preferred, but any color pigment is acceptable and varies with the color of the dog.
Faults: Partially pigmented or butterfly nose.

The long, lean, clean neck is slightly arched from the withers to the base of the skull, and is carried high.

Shoulder angulation is 45 degrees to the point of the shoulder, allowing for good reach. Shoulders are clean and narrow. The elbows are held close to the body.

The straight forelegs are long and slender, and they are set well under the body. The upright pasterns are fine and strong. Dewclaws on the forelegs may be removed.

The body is rectangular in proportion. The topline is level to the croup, where it slopes slightly. The loin is light and there is moderate tuck-up.

The chest is fairly broad and deep, extending to the elbow. The breastbone is not prominent. Ribs are well-developed but not barrel shaped.

Angulation of the hindquarter must produce a level back.

The hind legs are set far apart. The stifle is firm, and the long second thigh sweeps smoothly into the hock joint. Rear pasterns are short. Dewclaws may be removed.

The hare feet are narrow, with elongated toes. Nails are trimmed to moderate length.

The slender tail is long, fairly straight and tapering. It is set high and carried up or out, falling naturally when the dog is at rest.

Grooming is minimal, consisting of only what is necessary to present a clean and neat appearance.

The head crest begins at the stop and tapers off between the base of the skull and the back of the neck. Hair is permitted on the ears and face and may be trimmed for neatness. Two-thirds of the end of the tail is covered with a long, flowing feathering referred to as a plume.

Hair texture is soft and silky. It flows to any length. Placement of the hair is not as important as overall type. Areas that have hair usually taper slightly. Wherever the body is hairless, the skin is soft and smooth.

Any color, or combination of colors, is acceptable.
Disqualification: Albinism.

The ideal height range is from 11 to 13 inches. Dogs that are slightly smaller or larger may be given full consideration.

The characteristic gait is elegant, agile, and smooth, with good reach and drive. 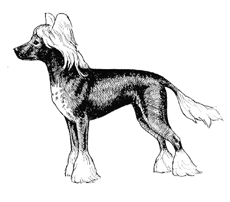 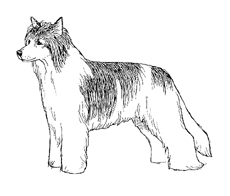