The history of the Chihuahua is lost in antiquity. It is known that both the Toltecs and the Aztecs kept dogs, some of which were used for food, some for religious purposes, and some for companionship. Whether these dogs were Chihuahuas or not is uncertain. The breed came to the attention of the modern world in the mid-19th century when American visitors to Mexico brought the tiny dogs home. Chihuahuas first appeared in American dog shows in 1890. Today the Chihuahua is a popular companion dog.

The Chihuahua was recognized by the United Kennel Club in 1948.

The Chihuahua is a small, active dog, with a rounded skull; a short, pointed muzzle; erect ears that flare out somewhat to the side; and a sickle tail. The breed comes in many colors and color patterns, and in both smooth and long coats.

Despite its small size, the Chihuahua is an alert, active dog with plenty of self-confidence. The Chihuahua’s small size and devotion to its owner have made this breed a popular companion dog. Chihuahuas are courageous little watchdogs who are more than willing to defend their territory against strange people and dogs.

The Chihuahua has a distinctive headpiece that is essential to correct breed type.

The skull is large and well rounded, sometimes called an “apple dome” or an “apple head”. Viewed from the side, the line of the skull should curve in a semi-circle from the occiput around to the muzzle. The stop is vertical with the line of the skull, forming a 90-degree angle where it joins the muzzle. Cheeks are clean.
Serious Faults: Flat skull; stop with an angle greater than 90 degrees.
Disqualification: An open fontanel, a hole or gap in the center of the skull, referred to as a molero.

The muzzle is moderately short and somewhat pointed, although it should be broad and deep enough to support healthy dentition. Viewed from the side, the bridge of the muzzle forms a right angle to the line of the forehead. Lips are tight and clean.

Eyes are full but not protruding, and set well apart. Expression is bright and the eyes are luminous. Eye color varies with coat color, but dark eyes are preferred. Light eyes in dogs with pale coat colors are permissible but not desirable.

Ears are large and erect, broad at the base and tapering towards their slightly rounded points. They are set so that the bottom edge of the ear is attached at the same level as the outer corner of the eye. The ears are normally carried so that the tips point slightly outward. This ear carriage is sometimes referred to as “at 10 o’clock and 2 o’clock,” referring to the position of these numbers on a clock face. A line drawn from the outer corner of the eye to the inner corner and a line drawn from the inner corner of the eye to the tip of the ear form a 45-degree angle. When the dog is alert, the ears may be raised slightly. Longhaired Chihuahuas whose ears droop slightly as a result of the weight of heavy fringing on the ears are not to be penalized.
Disqualifications: Drop ears after six months of age; cropped ears.

The neck is of medium length and slightly arched, blending smoothly into well laid back shoulders. It is free from dewlap, and is thicker in males than in females.

Shoulders are clean and moderately muscled. There is good angulation between the shoulder blade and upper arm.

The legs are straight and of good length, with the elbows held close to the body. The pasterns are strong yet flexible. Dewclaws may be removed.

A properly proportioned Chihuahua is slightly longer (measured from prosternum to point of buttocks) than tall (measured from the withers to the ground), and length of the front leg (measured from point of elbow to the ground) should approximately equal one-half of the dog’s height. Whether the dog is standing or moving, the line of the back is strong and level. The loin is moderately short and deep, with very little tuck-up. The ribs extend well back and are well sprung, but not barrel shaped, forming a body that would be heart-shaped if viewed in cross-section. The brisket extends to the elbow. Viewed from the side, the forechest extends in a slight, gentle curve in front of the forelegs.

The legs are parallel to one another with good angulation at the stifle and the hock. Rear pasterns are short, well apart and vertical. Removal of rear dewclaws is preferred but not mandatory.

Feet are small and oval-shaped with the toes well split up, but not spread out. Pads are well cushioned. Toenails may be any color.

The tail is moderately long, set on high, and never docked. It is thick at the base tapering gradually to a point.
Acceptable tail carriages include sickle or a single curl with the tip just touching the back. Tail carriage is an important characteristic of the breed. It should never be carried between the hind legs or curled below the back.
Disqualifications: Cropped tail. Bobtail.

The Chihuahua comes in two coat types, and it may be single or double coated. If undercoat is present, it is soft, dense, and close fitting.

- The outer coat is soft, glossy, and close fitting. The hair is longer on the neck and tail. Sparse coat on the throat and abdomen is permitted, but hairless dogs are not acceptable.
Disqualification: Bald patch (alopecia).

- The outer coat is soft and fine, straight or slightly wavy. If undercoat is present, it should not be too thick. The coat forms feathering on ears, neck, back of legs, feet and tail.
Serious Fault: Long, billowing coat.

All colors in all shades and combinations are acceptable, except merle.
Disqualification: Albinism. Merle color.

The ideal weight is between 3 and 6½ pounds, though smaller dogs are acceptable.
Eliminating Faults: Over 6½ pounds. Under one pound.

When trotting, the gait is effortless, energetic, active and springy, with good reach and drive. The hind legs should move nearly parallel to each other so that the rear feet appear to land in the footprints of the front feet. At greater speed, there is a tendency to converge toward a center line of travel. The head is carried high, and the topline remains firm and level.

(An Eliminating Fault is a Fault serious enough that it eliminates the dog from obtaining any awards in a conformation event.)
Over 6½ pounds.
Under one pound.

(A dog with a Disqualification must not be considered for placement in a conformation event, and must be reported to UKC.)
Unilateral or bilateral cryptorchid.
Viciousness or extreme shyness.
Albinism.
Drop ears after six months of age.
Cropped ears.
An open fontanel, a hole or gap in the center of the skull, referred to as a molero.
Cropped tail.
Bobtail.
Bald patch (alopecia) in the Smooth Coated variety.
Merle color. 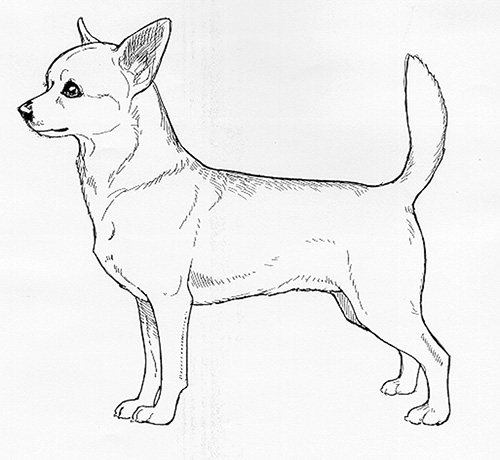 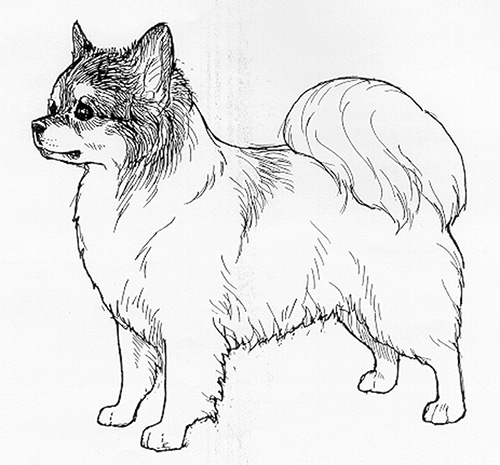 Download the Chihuahua Breed Standard from UKC
Register Your Chihuahua