The Chien Francais is a French breed developed to hunt big game.

The Chien Francais Tricolore was recognized by the United Kennel Club January 1, 1996.

Quite long, but not too broad.

The skull is very slightly domed. The occipital protuberance is marked. The stop is moderate.

Rather long and straight, sometimes with an arched nasal bone. The lips are full enough to create a square appearance.

The Chien Francais Tricolore has a complete set of evenly spaced, white teeth meeting in a scissors bite.

Fault: Pink spots on the nose.

Big and brown, with an intelligent expression.

Set at eye level and slightly curled, reaching to the nose.

Long and rather strong, with a trace of dewlap.

The shoulders are long, and held close to the chest.

The chest is deep to the elbow. The ribs are long and rounded. The back is straight and solid. The flank is very slightly tucked up.

The angulation of the hindquarter matches that of the forequarter.

The thighs are long and muscular, and the hocks are broad, low and slightly bent.

The feet are lean.

The tail is quite long, and carried high and with elegance.

Short and rather fine.

Hound tricolor, with a black mantle and bright tan. Black shading in the tan on the face, and blue or tan speckling on the legs, are allowable but not preferred. Grizzle is an allowable color.

Fault: Smokey colors that indicate interbreeding with the White and Black Hound. 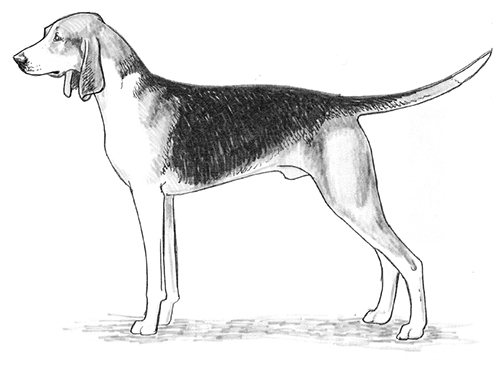